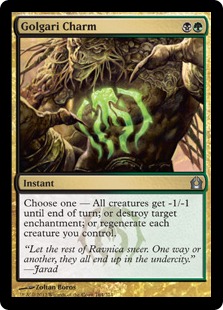 If you didn’t happen to watch the quarterfinals match between Jackson Cunningham and Yuuki Ichikawa at Pro Tour M15 on Sunday (and honestly, they played really slowly so I can hardly blame you), you missed what was easily the coolest play of the tournament. Watch it starting at 44:15 below, or just read the summary.

Down a game and behind in game two, Ichikawa seemed basically dead. At six life and facing down a 5/5 Advent of the Wurm token and a 2/2 Voice of Resurgence token, his 4/4 Scavenging Ooze could grow to a 6/6 and eat the wurm—but Cunningham was holding Selesnya Charm, which seemingly trumped any chance Ichikawa had of winning the game. 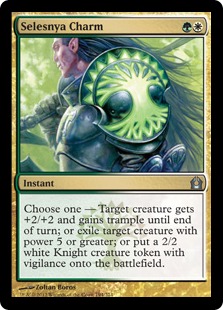 Cunningham swung in with his 5/5 trampler, and after some thought, Ichikawa slid his 4/4 Ooze over to block. He activated Ooze just once, putting him at seven life and growing it to a 5/5. Cunningham seized his chance to nail the coffin shut and played Selesnya Charm, choosing the “exile target creature with power 5 or greater” mode.

Ichikawa had something else in mind. “Golgari Charm,” he said, to the amazement of everyone watching, as no one knew it was his last card in hand. He chose the mode that gives -1/-1 to all creatures, putting his Ooze back down to a 4/4 and countering Selesnya Charm. Then he safely pumped the Ooze to a 5/5, which allowed it to eat the now 4/4 wurm token. To add insult to injury, Cunningham also lost the Voice token in this exchange.

In the following turns, Ichikawa quickly took the out-of-gas Cunningham down from 20 life to zero. Ichikawa ultimately ended up losing the match, but he got the consolation prize of winning the audience’s collective heart—not to mention the $10,000 prize awarded to pro tour quarterfinalists.

What was your favorite play of Pro Tour M15?

3 thoughts on “The Golgari Charm Heard ‘Round the World”