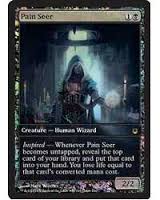 This recently came across the interwebs, and I think it's worth sharing. A Reddit user expressed concerns that his LGS was pocketing the promo cards that Wizards sends out and was reselling them for a profit rather than passing them out to the players as WOTC intends, and it seems he's not alone.

The simple question is, what can you do?

Simple answer: Report this activity to Wizards. It's something they take extremely seriously, and you should alert the customer service department. A stern warning from WOTC typically would shut this down, but they will take further action if needed.

I've seen local stores do this before. I went to a midnight Game Day at one of them, took a friend's homebrew deck and battled until 4 a.m. to make Top 8. I finished fifth, and then I find out they're only awarding half the Top 8 promos "because only four came in." That is, of course, a complete lie because they literally only come in packets of 8, and I found out later the same thing was happening with buy-a-box promos.

This is incredibly shady behavior, but you are not powerless. Simply bringing it up to the store is a start, and refusing them further business and encouraging others to do the same is understandable, but you also have Wizards on your side. Remember that.

4 thoughts on “What To Do With a Shady Store”