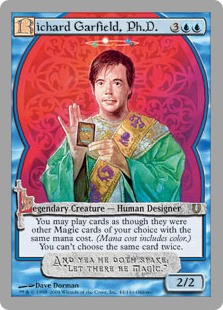 If you are a reader of Mark Rosewater's Blogatog or a listener of his podcast, Drive to Work, then you hear a lot about the Un-sets. Over the last three weeks, DtW has focused on going through every card in Unhinged, and Blogatog has silver-bordered questions almost every day. Rosewater is convinced it's just a matter of time until the third Un-set.

I'm here to ask QS readers if they have any interest in such a thing. While Blogatog might lead us to believe that silver-bordered sets have a wide audience, I have a simple piece of (admittedly anecdotal) evidence to suggest the contrary:

I Have Never Seen a Silver-Bordered Card in Play

I've been playing since 1995 or so, and despite being an active Magic player in middle school, when Unglued came out, I have never bought a single pack of silver-bordered cards. I've seen them in trade binders before, but I've never seen them in play (the only exception being a Booster Tutor in a friend's cube).

As a thought exercise, Un-sets can be intriguing to the established Magic player. It's fun to look through the spoiler and see what kind of cultural references and Magic-specific jokes Rosewater and his team can come up with. But when it comes to actually owning the cards, there are only ten across all of Unglued and Unhinged that most established players want: 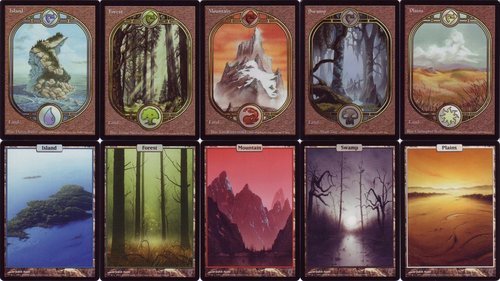 Other than the gorgeous full-art basics in these sets, most established Magic players I know don't care about Un-sets. You can't use silver-bordered cards in tournaments. You can't use them in most casual games, for that matter! I have never seen or been part of a playgroup that ever used these cards.

So are these sets just for kitchen-table players? If a third Un-set was printed, I would personally look through the spoiler, trade for all the full-art lands I could, and move on with my life. Is there anyone out there who would legitimately want to buy a product like this? Or do most readers agree that it doesn't serve much purpose other than a few laughs? Sound off in the comments—I'm really interested what the community thinks of these products.