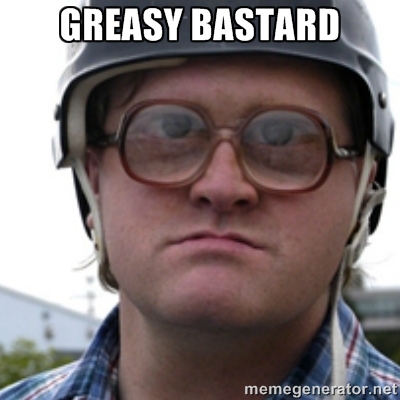 Occasionally I'll get a good idea and this year was no exception. Noticing that there were quite a few people in the /r/Spikes subreddit writing "tournament reports" in the form of long text posts in the subreddit, I offered everyone the chance to write them up on BrainstormBrewery.com so they would benefit from having them read by an editor and formatted professionally. Decklists look better in a table where you can hover over the card to see an image of it and being published on a website just seems better than farting out a text post in the equivalent of notepad. Some people were naturally suspicious, but lots more took me up on the offer. One of them was Max Perlmutter, a grinder and resident of the Philadelphia area.

Max has produced a few well received pieces for the site, but his best one came this week when he realized "Hey, I played that scumbag Trevor Humphries recently and he knocked me out of the Top 8!" Max put together a great tournament report that doubles as a great detailed account of what Trevor did to knock Max out of contention with a combination of psychological warfare and repeated deck-stacking shenaningans. It's a brief read, but if you're interested in the Humphries case it's a good one.

The real revelation came when the article was posted to the /r/magictcg subreddit and the top comment (it's since been downvoted to the middle of the pack) didn't concern Humphries' inherent greasiness but rather Max's own when Max asked an out-of-contention opponent for a concession that would put Max in the Top 8. "Greasiness isn't my word, either.

All of this started a nice debate. Is it "greasy" to ask an opponent to concede? Does it make sense for two guys on the bubble to both miss the cut to Top 8 because "that's how the match turned out" or "Why should I let him win if there is nothing in it for me?" Experienced players are likely to consider refusing to concede when it would mean at least one of you made the cut to be greasy.

Osyp did a great interview about the subject and the culture of Magic at high levels. Some people aren't aware of the etiquette at higher levels, but most players who have been there before know what's up. Osyp refers to it as "paying it forward" and while you can't ask for packs in exchange for a concession, you can have faith in humanity and hope your opponent does the right thing. Having been in that situation myself a lot, if you're not "greasy" it is obvious what is right. If I took the majority of the time in the match and I'm the reason we didn't finish the match or my opponent has much, much better breakers, it's obvious that the onus is on me to concede. The times my opponent has scooped me (including into 9th place, twice. Daggers...) I have given them some packs, and not as a payoff for scooping me, but rather because they would have gotten more packs if we'd drawn and they should have some sort of remuneration for doing the right thing. If you ask me, people who fold their arms obstinately and say "Well, I guess we both draw then" or don't give their opponent any of their packs if they're scooped are the greasy ones.

Don't be afraid to ask an opponent for a concession if it would put you in the Top 8 and a draw would keep you both out. It's not "greasy" or "collusion" (unless you try to explicitly bribe them with packs or some other consideration - don't do that) it's good, solid game theory.