Either you're doing it wrong and not following me on Twitter, or you saw this tweet yesterday.

This was not apropos of nothing, but rather the result of a conversation that took place on Facebook yesterday.

Before I get into that, let's take a look at the issue and why it's a serious problem that divides our community and serves as a significant barrier to women feeling welcomed by the community.

Wizards of the Coast estimates that 10% of Tournament Players are female. At least that's what Wizards tells people. I have no idea how they arrived at that number. If I had to guess, I might suspect they based it off of the percentage of females with registered DCI numbers.

While a GP is a big deal for the competitive scene and well under 10% of the entrants are female, a prerelease is the biggest event of the year for the kitchen table crowd, and there doesn't appear to be a gender gap among casuals.

If you think that's a good thing, I'm here to tell you why you're wrong.

Articles like this one paint the community in a very negative light, but, sadly, they are all-too-common lately.

Women in the upper echelons of competitive play, like Jackie Lee and Melissa DeTora, face increased hostility due to the increased visibility their fame and success affords them, but it's not limited to competitive players. Helene Bergeot, the director of organized play for Wizards of the Coast, has come under attack in the past. It's not just gynophobia either - transphobia is rampant in the community as well. 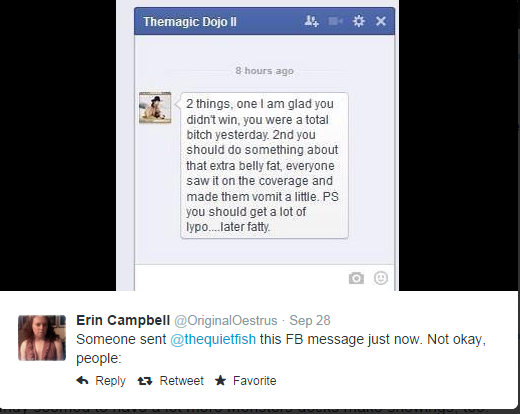 This is a facebook message sent to Jadine Klomparens and retweeted by Erin Campbell. It's unclear whether "Themagic Dojo II" knows he was attacking a member of the trans community or thought he was just being a garden-variety misogynist, but let me suggest that it isn't relevant.

Hostility to women, cis and trans alike, is a black eye to the community and undermines the effort of most of the community to seem welcoming as well as Wizards' efforts to expand the appeal of the game, grow the player base and foster a tolerant and welcoming community.

While not as bad as messaging someone on Facebook to tell them to get "lypo" [sic], a different kind of intolerance is routinely practiced by a segment of the community and, unlike the few trolls who use the anonymity of Twitch to tell Jackie Lee to "get back to the kitchen", these people don't think they're doing anything wrong. 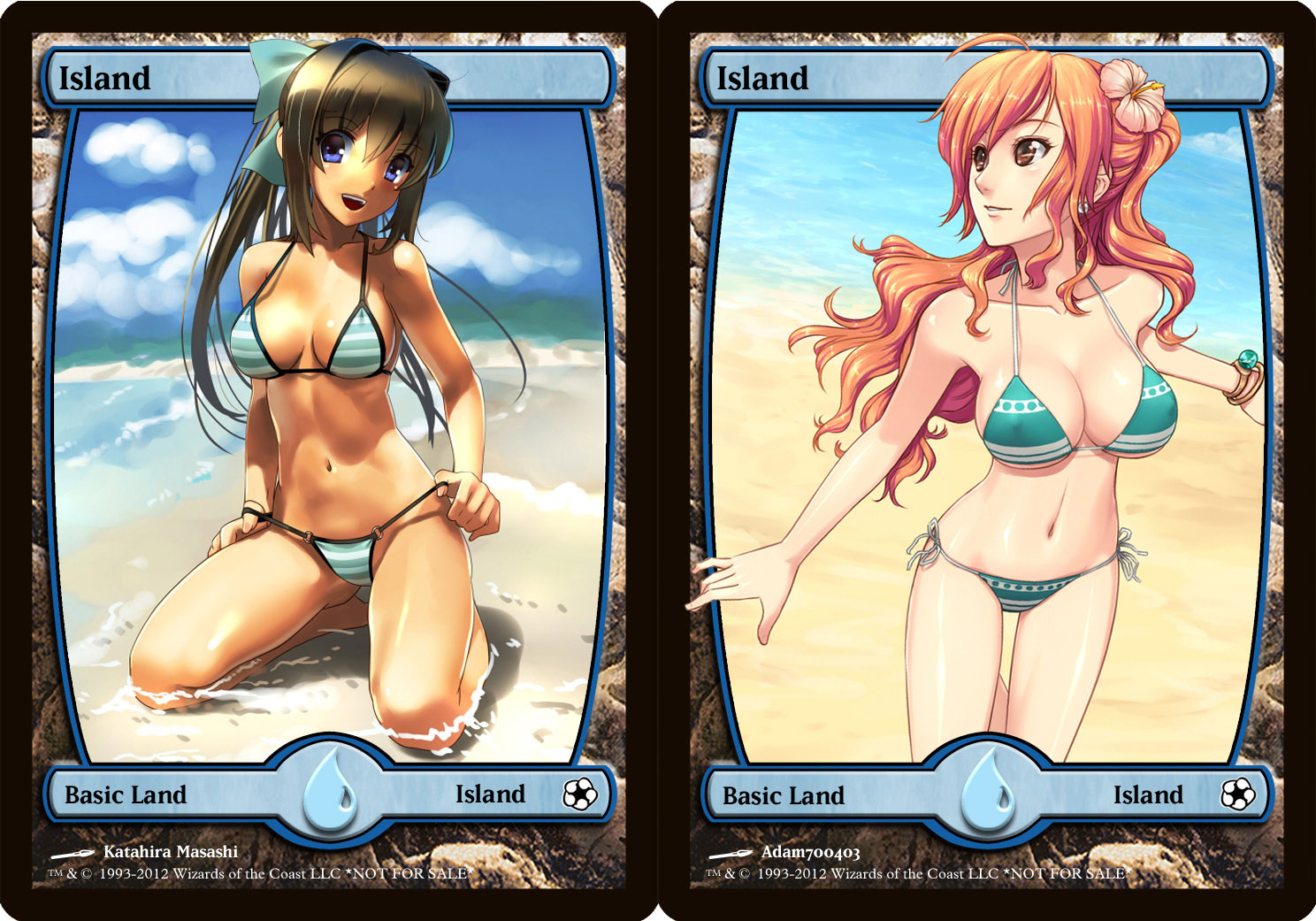 Card alters like this one are readily available on eBay.

"Who's buying and playing with these?" you might ask, never having seen these on display at your LGS (you're lucky). It isn't just people who don't venture outside of their home, as evidenced by a proud alter-collector on The Source in a thread where people showed off their "pimp" decks (a silly term for a foiled-out deck; thanks Xzibit). 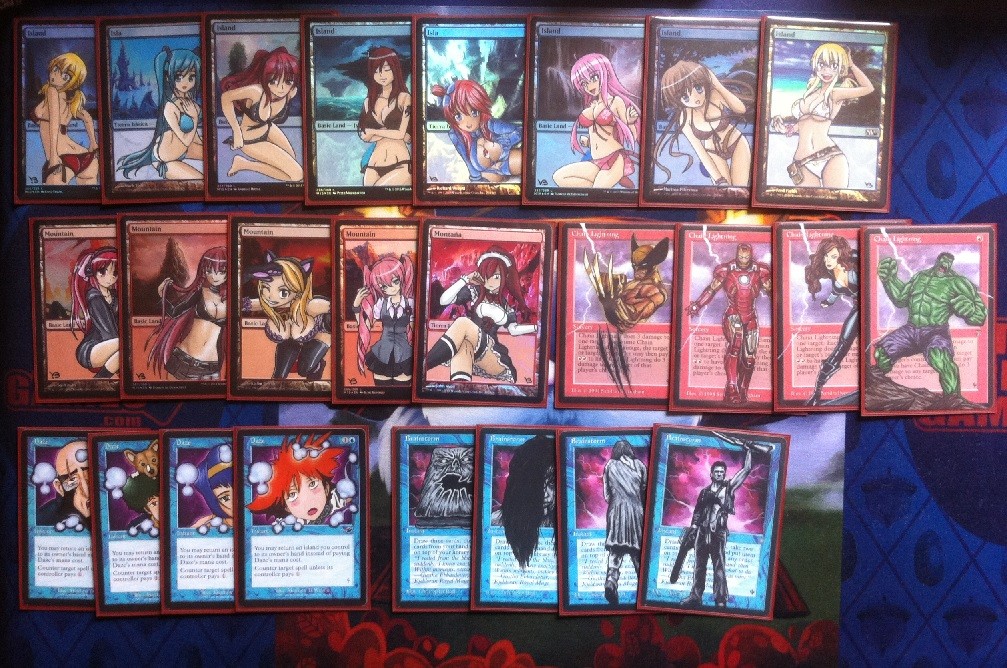 Comments ranged from "Now I know who buys these Islands" to, succinctly, "/vomit".

Is playing with these Islands and Mountains tantamount to telling Melissa DeTora to go fix you a sandwich (something not even Frank Lepore has the balls to do to her face, I'm guessing)?

No, of course it isn't. And the problem is that it's easy to rationalize that this isn't a problem.

So back to the Facebook argument I got sucked into. It all started when someone posted an example of one of his card alters in a "buy/sell/trade" Facebook group, ostensibly to drum up some business. I didn't imagine it was likely to drum up much business, but everyone is a critic so I kept my critques about visible brushstrokes, uneven paint thickness and covered text boxes to myself. It wasn't my cup of tea.

Mostly because I don't like anime demon women with cartoonishly-large breasts and thighs in my tea.

I noticed that later in the day, someone posted a comment to the effect of "You might not want to play with these lands because people might think you're a creep", which was pretty mild considering it came out later that he was thinking "Stuff like this is the reason I don't bring my 8-year-old daughter to the shop".

I couldn't resist joining in when the artist fired back that he didn't find the female form offensive, and every weird rationalization of this kind of card alteration came out.

Not long after, I was called a "White Knight" dismissively, "White Knight" not referring to my ability to strike first in battle or dodge a Tragic Slip, but rather a term used by the privileged to undermine someone who is trying to intervene on behalf of women.

Let's not make any mistakes - there are a lot of instances where "White Knights" are a real annoyance and are making a big deal out of an issue to try and curry favor with someone or bring attention to themselves. It's also incorrectly used a lot by someone trying to rationalize being a poor community member.

Being a Good Community Member

Hyperbolic Strawman arguments aside, most people agree that the community is not the most welcoming gaming community to women.

Does a charitable definition of "video game", which includes the likes of Candy Crush Saga and Angry Birds, help that? Yes, of course. But to focus on that is to miss the point, and right now this community is suffering from a terminal case of "missing-the-goddamn-pointitis".

We should be focusing on why video gaming is more welcoming to women than Magic: The Gathering. If I had to guess, I would say it's because an adult woman playing League of Legends or Mario Kart or--God forbid--Candy Crush Saga doesn't have to deal with customers at work asking her if there is a man around they can speak to, or a coworker staring at her chest while she tries to talk to him. Or someone telling her to get back to the kitchen.

Most importantly, she doesn't have to see some neckbeard self-righteously adjust his Trilby (it's NOT a FEDORA!) and tell her "I don't find the female form offensive" when she asks him why he's playing with basic lands with topless girls painted on them at an FNM.

Why would you ever try to make yourself feel better by making someone else feel worse? This isn't Junior High School.

This is a community, and if you can't follow a few basic rules of decorum, maybe you don't deserve to be a part of that community. I don't care how much you admire the female form.

If we all don't start showing a little class and decency, pretty soon the only females we see at Magic tournaments will be shoddily painted on our lands.

Edit: There is a lot of discussion taking place over at /r/magicTCG as well.