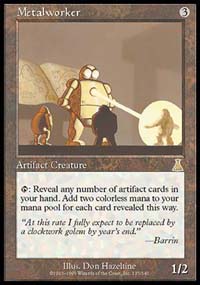 Reddit user ubernostrum posted a complilation of information last week. Entitled "Legacy: a turn-one spotter's guide," this post goes over each and every land and turn-one play you may see in Legacy. Being able to figure out what your opponent is playing quickly and accurately is a great way to give yourself an edge in a match, and this post does a great job of laying out the possibilities of the format.

The three most common decks in Legacy which play basic Plains are Death and Taxes, Maverick and Miracles. Miracles is less likely to lead on Plains if it can avoid it, as turn one Plains does not permit turn two Counterbalance unless followed by a Mystic Gate, but can be a sign of Swords to Plowshares lurking.

Plains into Mother of Runes tells us we're facing either Death and Taxes (most likely by far) or Maverick. Plains into Aether Vial should be taken as absolute confirmation of Death and Taxes. Plains into Sensei's Divining Top is almost certain to be Miracles, but there is a fringe chance it could be a white Stax, Metalworker or Stompy deck.

Small edges can equal big results, so take a moment to read over this post and give it the praise it deserves. For Legacy players, this is a public service of the highest magnitude.

One thought on “A Great Resource for Legacy Players: The Turn-One Spotter’s Guide”