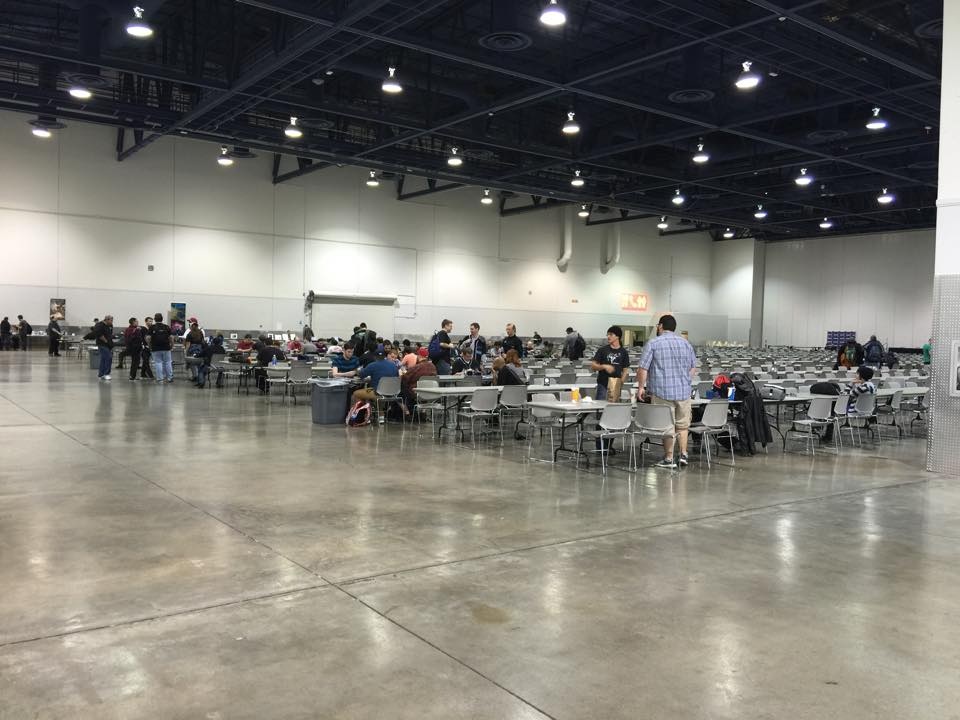 I was pretty excited by the Cardmageddon announcement, as I wrote about here. A tournament with scaling prizes is a big deal in a community that almost never sees such a thing.

Unfortunately, the event had to compete with other tournaments over the weekend, and the turnout was reportedly not fantastic. 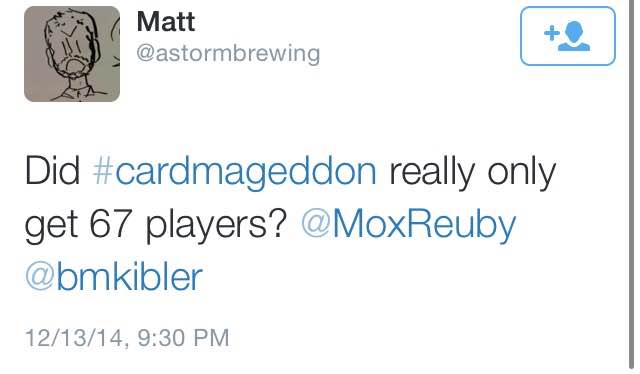 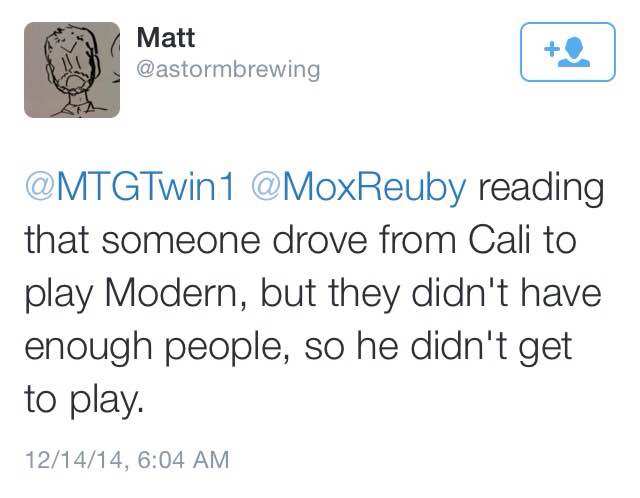 For the record, Reuben Bresler replied that it was more than 67 people, but didn't provide an actual number. Still, the photos of the event look pretty depressing for a $25,000 tournament:

So what went wrong? For starters, competing with the SCG Invitational and Grand Prix were problematic. Some Twitter users indicated that the advertising for the tournament gave them the impression it was a by-invitation-only event, which surely kept at least a few potential attendees at home.

But most of all, it's hard to start a new brand. People attend SCG events in part because of SCG's sterling reputation for organizing excellent tournaments. A reputation like that is not something you can buy, and it's not something that comes overnight.

Reddit user rubeerubin, who claims to be the CEO of tournament organizer CardAgain, is upbeat about the situation:

Obviously attendance was low, but many positive things happened at Day 1 of this event! We pulled off a revolutionary format without any major hitches. The tournament software we wrote worked fantastically and was wonderfully scalable (as was the payout).

Did we lose money? Of course. We weren't expecting or trying to make money. We were trying to get some exposure, get people to know of our existence, to use our (again revolutionary) website and to give players a cool twist on the way tournaments can be run.

By allowing multiple formats (on day 1), we allowed all walks of magic players to qualify for Day 2 with their strength. By allowing people to rebuy (cheaply), it gives people an opportunity to change their deck around, or even switch formats mid day. By having smaller mini tournaments, we allowed players to have breaks where they could actually eat, drink, use the restroom, etc. comfortably.

On marketing, since you guys seem to have hammered it pretty hard, we spent over $40k. This included contacting about 1500 card shops about sending a free packet to them, which included a free voucher for CardMagedon for the winner of a tournament to be held in their store. There were (oddly enough) quite a large number of stores who refused to receive the packet, another contingency of them who failed to hold a tournament (it was simply offered as extra prize for an already existing tournament, or hold a new one, either way), and then quite a large number who took advantage of the free opportunity and reported fantastic success. All of this was dwarfed by massive budgets for ads on Facebook, Google, twitter and reddit.

On timing: a company who wants to host an event has to schedule things way in advance. We contacted Wizards to find out their GP schedule (I mean, we promote people to play their game), and we were told there would not be a GP that weekend. On SCG invitational, losing a couple mid level pros wasn't too bad, compared to other weekends where there were other major concerns, like having a good venue in a great city (these places book up sometimes years in advance). And the bottom line is that as a startup, you cannot sit around and wait for years to try to make a splash.

All in all, we learned a lot, have a lot of great feedback and ideas for next time and had a TON of fun putting this on for the players.

Day 2 is going to be a real treat, with many HUGE names competing for the title (Shahar, Kibler, EFro, Justin Gary, David Williams to name a few). And yes, that was part of our marketing budget as well. Oh and coverage by the fantastic team of Reuben Breslar, Tannon Grace and Michelle Roberson (www.twitch.tv/cardmageddon).

tl;dr We are doing lots of great things for the community and sometimes that costs a lot of money. Hopefully people appreciate it. If not, then hey, we tried. Try out our website. We think you will like it. www.cardagain.com

That's some serious optimism right there, and it explains some of the apparently poor decisions made by the company. If CardAgain holds more of these events, I expect improvements to come incremently—but I also expect the minimum payout to be lower for a while. Frank  Lepore said it most succinctly: 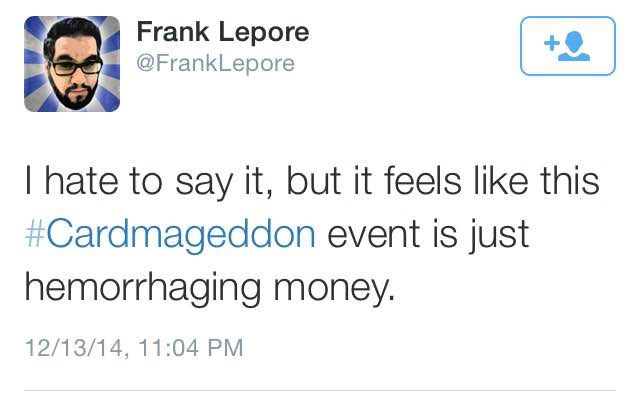