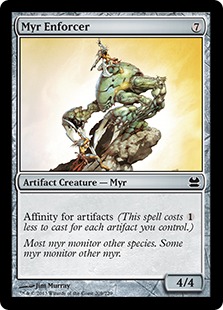 At least, it's the face of Affinity five years ago.

As we all know, the actually "Affinity" deck mostly stopped running cards with the mechanic on them a while ago. It became a slew of early drops, Ravagers and Cranial Platings.

Everything old is new again, I guess. With the advent of the Treasure Cruise, Dig Through Time or Birthing Pod format that is current Modern, a shakeup was needed to keep Affinity relevant. Dario Parazzoli provided it, going back to Affinity's roots with Frogmite and Myr Enforcer and even Scale of Chiss-Goria, a card I admit I had never seen in my life before. His deck could explode on Turn 1 and then "go off" with Contested War Zone for brutally fast starts.

Of course, I don't have much faith for the deck to stick around in the current meta, but it was a nice shakeup at the Grand Prix. The current three-deck (or at least, three pillars) format will likely continue to stick around, just with more Shatterstorm and Creeping Corrosion. At least, that's my pessimistic take on it. What do you think?