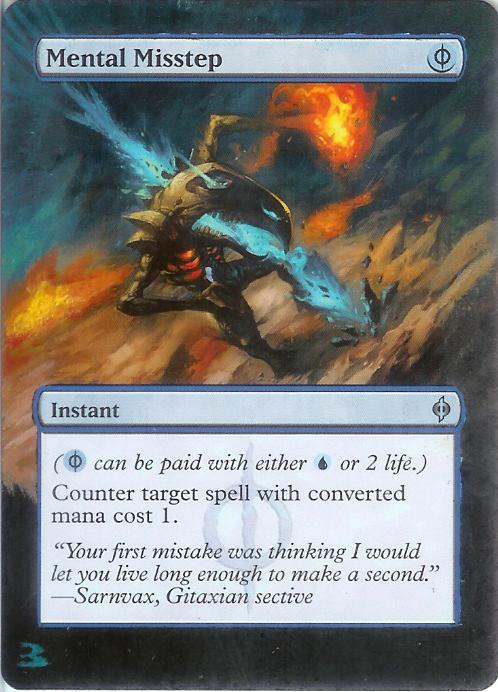 Mental Misstep created quite the stir when it was printed. In Legacy, it became an automatic four-of in just about every deck in the format. Although non-blue decks were packing it as well, its printing did a whole lot more for the blue decks. Aggro and combo decks, especially ones that focused heavily on one-drops (and this is Legacy, so they all do), started performing poorly. The DCI admitted as much in its statement regarding Mental Misstep being banned:

Force of Will has long been thought of as a card that helps keep combination decks in check in Legacy and Vintage. However, it doesn't directly help decks that aren't playing blue. One idea that was floated was creating a similar card that could be played in nonblue decks. When Phyrexian mana was designed, it was an opportunity to create such a card. R&D wanted a card that could help fight combination decks, and could also fight blue decks by countering cards such as Brainstorm. Clearly printing a card like this has a lot of risk, but there is also the potential for helping the format a lot. The risk is mitigated, because if it turns out poorly, the DCI can ban the card.

Unfortunately, it turned out poorly. Looking at high-level tournaments, instead of results having blue and nonblue decks playing Mental Misstep, there are more blue decks than ever. The DCI is banningMental Misstep, with the hopes of restoring the more diverse metagame that existed prior to the printing of Mental Misstep.

In Modern, Mental Misstep has never been played. It was on the original banned list for the format, with this reasoning:

Of blue cards that are legal in Modern, Mental Misstep is the most played in Legacy, and it also has one of the more damaging effects on Modern by sitting on beatdown decks that want to start on turn one. We chose to ban it rather than put that much pressure on beatdown decks.

This is all perfectly fine reasoning, and I'm generally okay with Mental Misstep not being in Modern. 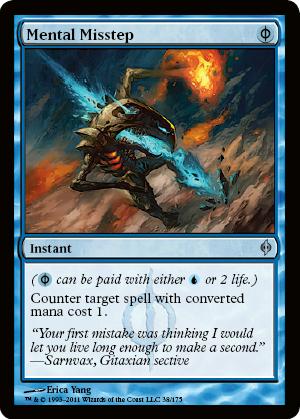 But here's the thing: is it really too powerful?

Those who slogged through Legacy events during Misstep's reign of terror will probably snap off a "yes" and be done with this article, but I remember Standard during New Phyrexia's legal days. Misstep was a powerful card to have available, but was hardly format-breaking, and this was at a time when Delver decks—with all their one-drops—reigned supreme.

Mental Misstep would be powerful in Modern, there's no doubt. It counters mana dorks like Birds of Paradise and Noble Hierarch, the best removal spells like Lightning Bolt and Path to Exile, and efficient beaters like Delver of Secrets // Insectile Aberration and Wild Nacatl.

But despite these powerful one-drops, Modern has a much wider range of casting costs and win conditions than Legacy, meaning that Mental Misstep would merely be a utility spell to answer certain problematic cards—not something that would completely take over the format and lock everyone out of their hopes of hitting lands off Brainstorm (after all, there are no good cantrips in Modern).

On top of that, Modern is a format where players do a whole lot of damage to themselves by fetching untapped shocklands turn after turn. Paying two life to cast a Misstep seems a whole lot less attractive in the format than in Legacy—the life loss is a much more concerning cost when you're already spending tons of life.

Just to be clear, I'm not really advocating for an unban of Mental Misstep. The harm it could do in the format probably exceeds the utility it might provide, so it's likely just safer to leave it banned.

It's just that there are a handful of cards that have been banned since Modern's inception, and frankly, I'd like to see how they do in the format. In my opinion, cards should earn their bannings, and Mental Misstep was never even given the chance. What do you think?

14 thoughts on “Why is Mental Misstep Banned in Modern?”