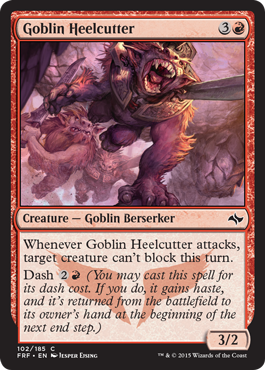 Triple Khans of Tarkir was a notoriously slow format. More often than not, the first spell cast each game was a turn-three morph, and all the tap lands running around also contributed to slowing the format by a turn or two. Getting to eight mana or more was common, and games often lasted in excess of ten turns.

A lot of that is still true now that we have a pack of Fate Reforged to start each draft, but the new set has added a lot of tools for aggro decks. I've done eight drafts in the format so far and have won three of them, each time with a low-curve, aggressive deck. 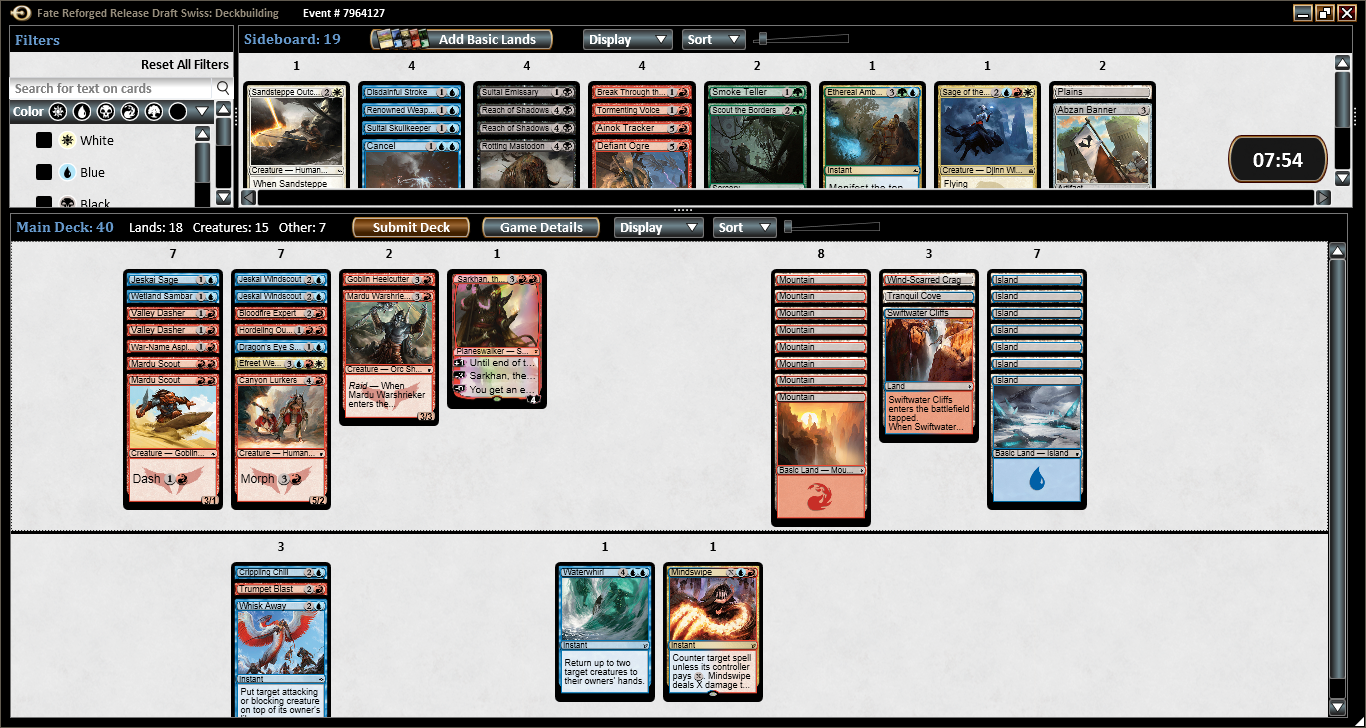 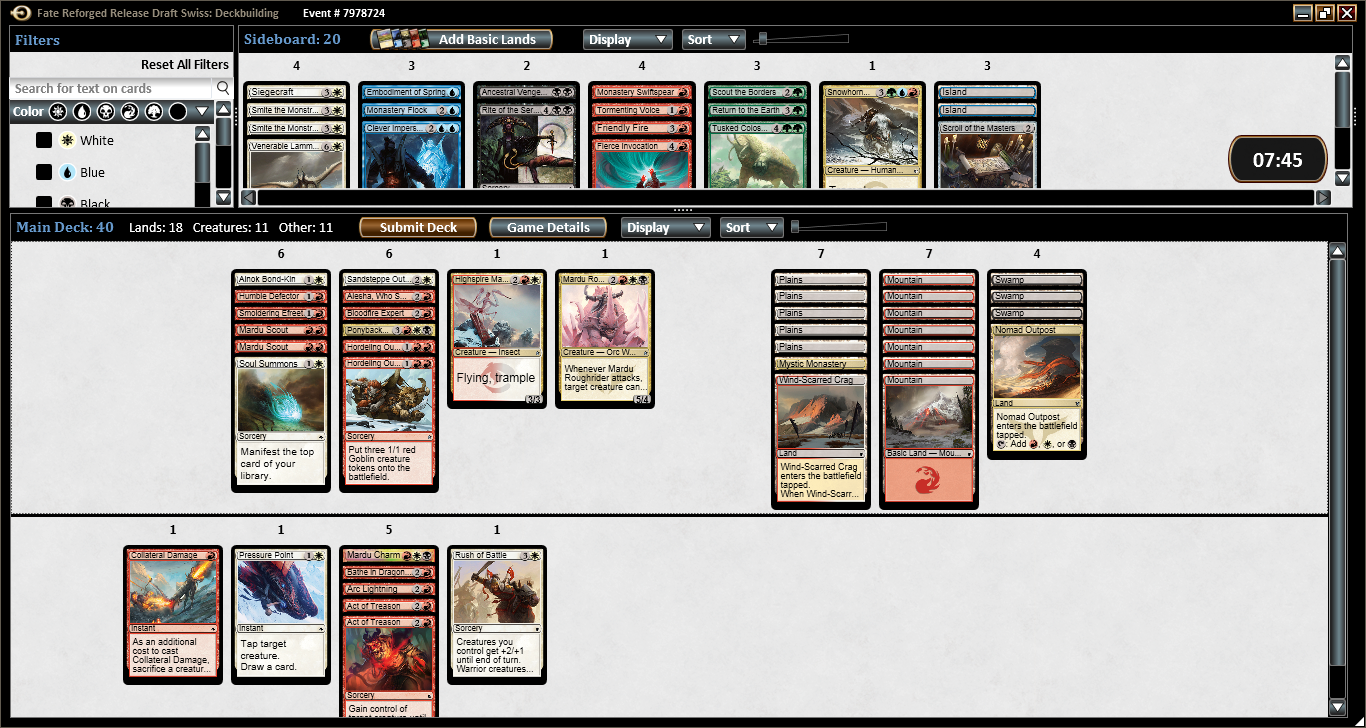 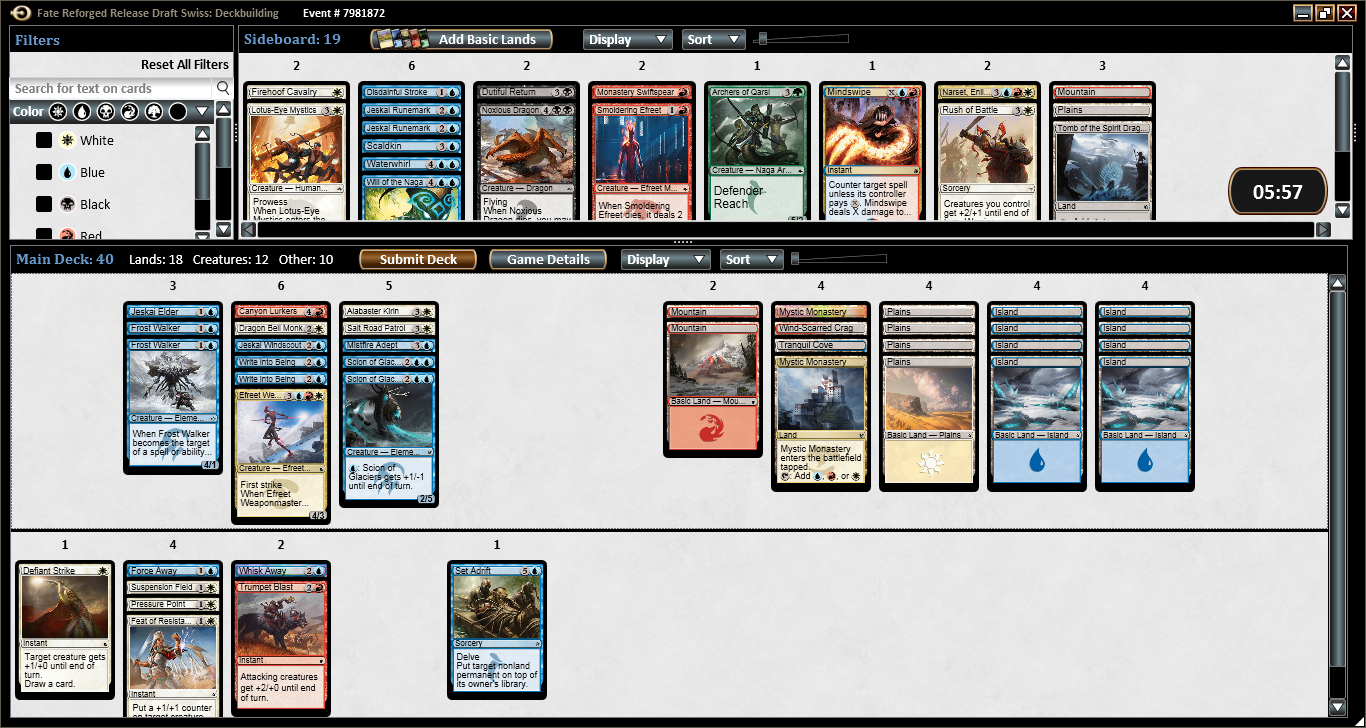 Two things I've noticed: First, people are still treating this like a very slow format, which means you can just run them over if you set your mind to it. Second, red is generally regarded as the weakest color in Fate Reforged, but people are overcompensating for that fact, in my opinion. As a result, it's often wide open, and if you cut it off in pack one, you get a lot of nice stuff shipped to you in the Khans packs.

A couple uncommon burn spells are among red's best non-rares in the set: 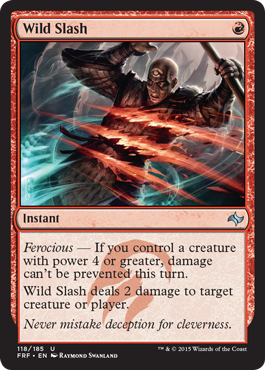 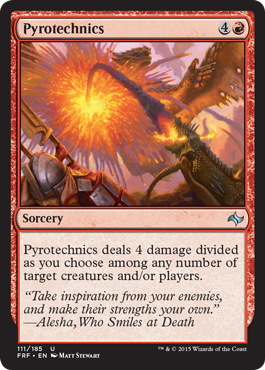 I have not had the pleasure of seeing either of these in a pack, but you don't have to have a ton of hands-on experience to know Wild Slash is great in a format full of morphs and manifests and Pyrotechnics is great in basically every format ever.

Really, there's a few commons that excite me most to be in red in FRF, and because it's a small set, you can often get three or four copies: 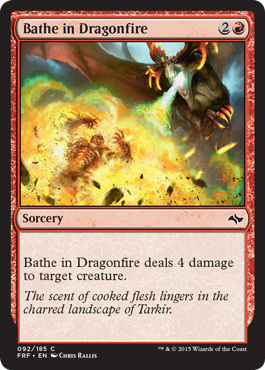 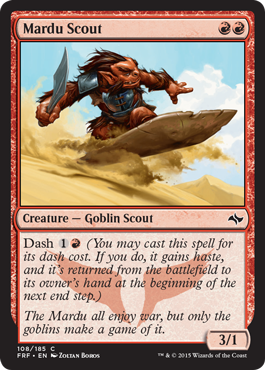 Goblin Heelcutter is a key card for aggro decks to win in this format, especially against Abzan. Folks tend to respect it, too, because you don't often see more than one in a draft. Pick it early and often. Bathe in Dragonfire is solid, if not spectacular. It kills lots of important things but not every important thing. Mardu Scout is a personal favorite. I dash this 90 percent of the time. I prefer to play a different two-drop on turn two, follow up with a three-drop, then dash this and play a second two-drop on turn four. Dashing multiple Scouts in one turn has ended several games for me so far.

I wouldn't spend a high pick on it, but I really have come to love this card: 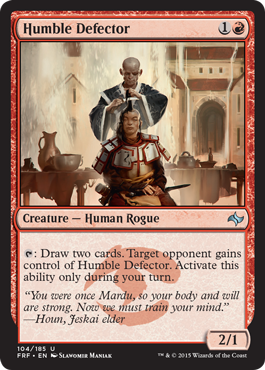 If nothing else, it's a two-drop that attack for two. But when you get into a board stall and it's worthless, it can provide the gas you need to close out the game. Note that when your opponent gains control of it, it is still tapped, so you have time to either deal with it or just finish off your opponent before it untaps. I played a game against a Mardu deck where I played this on turn two, dealt four damage with it, then we passed it back and forth for quite a while, each drawing eight cards before I drew the combo I was looking for: 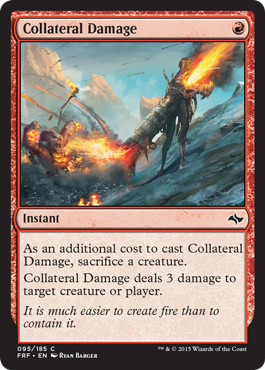 I finally came out ahead with Humble Defector when I put its ability on the stack and sacrificed it to Collateral Damage to kill my opponent's key blocker. I initially dismissed Collateral Damage as pretty bad, but it is much better than I assumed. Using it in response to removal is fantastic, and there's plenty of tokens floating around that aren't too painful to get rid of. Assembling the Humble Defector combo is the absolute nuts, though. The other Defector combo is with Arc Lightning, where you draw and then kill the Defector plus a morph before your opponent can get value off of it.

It's important to note that two-color decks are more key now than they were in triple Khans of Tarkir. Sure, there's a dual land in every pack of Fate Reforged, but Khans has two or three per pack, with trilands in the mix, as well. Committing to two colors or two colors with a light splash is a great way to help you run over your slower opponents. With morph, manifest, dash, and other mana sinks floating around, I do still strongly believe that this is still an 18-land format, as each of my winning decks above shows.

Two-drops are the most important ingredient if you want to run over your opponents with an aggressive deck in this format. If they attack for two or (even better) three, they're good enough, even the vanilla ones. That doesn't mean they're great cards in every matchup, and they may be the first thing to sideboard out, especially on the draw. Regardless, getting something down on turn two is key to making aggro work in this format (and every format, I suppose, but I think people are forgetting that fact after Khans of Tarkir).

Let me know if aggro has been working for you in FKK! Anything I omitted that should be mentioned? Sound off below.

3 thoughts on “FKK Limited Focus: Aggro is Better and Red’s Weakness is Overstated”