There are a number of topics I wanted cover this week, but none of them were something I felt like forcing 1500 words on and frankly, some of this stuff might not wait another week. In light of this, here are a hodge podge of topics on my mind. 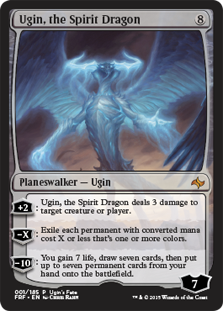 The Fate Reforged prerelease featured a chance for players to open free money. I heard rumors of an alternate art Ugin being offered at the prerelease and I softened my stance of "I'm never playing another prerelease again" to "okay, I'll bite." When the alternate art cards were confirmed I locked in my preregistration and loaded up my trade binder.

During my flight at the prerelease, I was not lucky enough to open the Ugin, but I announced to the room to open the packs and that I would trade heavily for it. One kid opened it and I told him I would give him double the value of a regular Ugin. Two Polluted Deltas and two Ashiok, Nightmare Weavers later, I owned an Ugin.

Then I got in my car and started driving home, I checked Twitter and saw a flurry of tweets that these were already selling for $100 on eBay. Oops, sorry guy.

There are two lessons here:

Stay informed. Using Twitter for up-to-the-second Magic related news can give you an edge or cost you one. Most of us now have the entire contents of the internet at our fingertips. If my trade partner had looked at completed eBay auctions, he could have gotten a lot more out of me for that Ugin.

Limited promos are serious business. We're already starting to see the prerelease foils for a number of the hot Khans of Tarkir cards match or even surpass the pack foil versions in price. All of the Ugin's Fate promos seem like a good pickup at this point, especially considering you can get most of them ultra cheap because there are few playable cards in the list.

I talked with a number of my dealer and collector acquaintances at the SCG Open and the consensus is that Ugin is going to be a price juggernaut. We're two weeks out from the prerelease and he's already selling for $140. Long term they think the price will be similar to the full art foil Mutavaults from years ago...which are currently sitting around $700.

This is a card that if you have any desire to pick up, now's the time because that price is not coming down any time soon.

Cards on the Cusp

If you haven't caught on yet, Anafenza, the Foremost is the real deal. For whatever reason this card still seems to be dragging its feet when it comes to Constructed play. As more and more people jump on the Tasigur, the Golden Fang train in Standard, Modern, and Legacy, you can expect Anafenza to show up on some of those battlefields to keep graveyard shenanigans from getting out of hand.

This is another card that many vendors I talked to this weekend said they are taking foil copies out of their stock and waiting because they feel like a pretty big spike is coming soon. She's currently sitting at roughly $15, so there's plenty of room to grow long term.

This was not a card I expected to see at all this weekend at the Legacy Open, but things are shifting in Legacy and apparently Titania is one of the new players. I was pleasantly suprised to see Titania in play in matches both against me and even at the top tables. With the green commander deck being one of the least popular, Titania is likely to be in shorter supply than some of her counterparts.

A five-drop in a winning deck in Legacy may seem preposterous. Allow me to present exhibit A: http://youtu.be/ZnzS09dXiFg

I believe that we've only begun to see the innovations with Titania, Protector of Argoth in Legacy and after seeing this card in play multiple times this weekend, I'm definitely a believer. This is unlikely to see a reprint for a long long time, so it's a pretty safe speculation target long-term.

The Death of Legacy

Sorry kids, it's just not happening. The Legacy Open this weekend had an attendance in the high 500's and there was no lack of enthusiasm at the event. Legacy is and will remain a vibrant format that is still capable of attracting a crowd.

Even with the rising prices of many of Legacy's most popular cards, people are innovating new strategies with less expensive cards. Legacy is still a format that people are excited to play, and every time a player calls it quits another steps up to take up the torch.

The great thing about big events is getting to meet up with internet acquaintances and make them real life friends. I've met Sig briefly once before, but this event was first chance we've had to hang out for any amount of time.

As I'm sure most of you know, when two "financiers" sit down together...they have to make a trade. Neither one of us really needed anything from the other so we decided to make a "blind" trade: my Japanese Flagstones of Trokair for his Narset, Enlightened Master. After checking prices, it looks like I got sharked!

While we were talking Sig pulled out a sealed Modern Masters booster packed and asked jokingly if any of us wanted to trade for it, I confessed to being an absolute savage and handed him a couple Khans fetches and tapped the pack two times for good luck. Kira, Great Glass-Spinner--SHARKED AGAIN!

The biggest and most concerning news to come out of this weekend is the passing of fake cards at the trade tables.

A local guy sat down near me with his binder open and I looked over from a few feet away and saw what looked like a Summer Edition Underground Sea. At first I was shocked and amazed that the guy had traded into something like that--I knew he had been grinding trades for a long time so I had to look closer. It was a fake, and his Bayou was fake...and another and another and another.

"Did you just trade for these?"

He turned white. He had just traded his entirely foiled out U/R Modern Delver deck for an assortment of fake dual lands and other staples like True-Name Nemesis and Liliana of the Veil. He promptly alerted Star City officials, but it was too late and his deceivers had left the scene of the crime. On Twitter, I saw that at least one other guy had been taken on a fake dual land as well.

While the local guy should have been able to spot them immediately, he got caught up in the moment and the exciting prospect of making a "good trade" and got took to the cleaners. These were not new, more advanced, fakes than the ones we learned about last year but now they are out there being passed maliciously by knowing scammers. The local guy was a fairly experienced trader and was still taken which begs the question: how many people didn't realize they were given a fake card?

If you don't know how to spot fake cards there's a great writeup here. Some of the simplest tricks still work the best.

Carry a small stack of Revised commons with you in a box, stick the suspect card randomly in the stack and look at the side of it ... if one card stands out, it's probably fake.

Remember that cards from Revised, Arabian Nights, Antiquities, Legends, and The Dark also have a different finish than every other set printed. They all have a chalky matte texture that you won't find in any other set--they will never appear glossy.

The other thing to come from the fear of fake dual lands is the increased number of people saying that they prefer SP condition duals because they're likely to be fake. To me this is blasphemy, but I can understand the logic. Expect to see the price gap between NM and SP versions of these cards to start closing.

If my calculations are correct, we have a Pro Tour next weekend. This will result in the last big price shifts in Fate Reforged cards before settling into more predictable patterns until the next release. Be ready to capitalize on any price movement of cards featured in the tournament's breakout decks.

Remember to trade safe (not with sharks like Sigmund) and stay informed, we'll be back next weekend with a final analysis of my Fate Reforged boxes and any breakout hits from the Pro Tour.

7 thoughts on “Insider: A Hodge Podge of Info from SCG Indy”