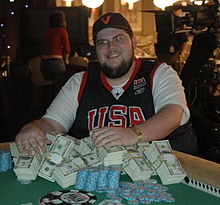 After losing Jon Loucks before the show barely had a chance to get started, it looked like Constructed Resources was dead. But that was not to be its fate! Today it was announced that Eric Froehlich, poker pro and four-time pro-top top-eight competitor, is joining the show.

A couple years ago, I wouldn't have thought this was good news. Froehlich was prone to go on unproductive rants on Twitter pretty frequently, picking fights and generally causing commotion (I feel like a should add a "young whippersnapper" here or something, even though we're about the same age).

That said, Efro appears to have genuinely mellowed out since then, and I really enjoy hearing from him on podcasts and Vintage Super League matches. His guest spot on Limited Resources (immediately before Luis Scott-Vargas officially took over the cohost role) was excellent, and I half expected the announcement of him taking over to come shortly after. Instead we got LSV, which is awesome, and now Efro on Constructed Resources, which is also awesome.

My biggest hope is that this means lots of Vintage talk, and maybe Legacy and Modern, too. What do you hope to see from CR moving forward?