With a G/W Devotion mirror in the finals of GP Miami, there was a lot of mind-numbing nonsense going on. Several hours before the final though, there was a story that made people feel feelings. 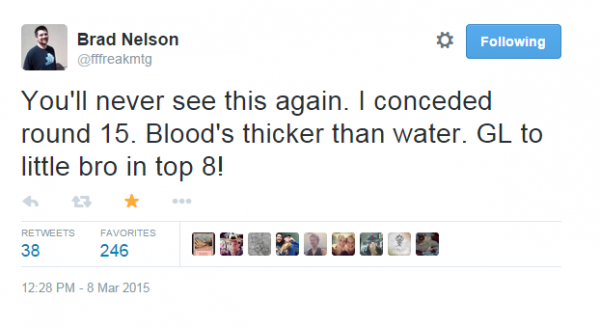 How awesome is that? I have a younger brother who played Magic for a minute, and playing with him was fun, but our story is nothing like that of Brad and Corey. What an amazing gift to give to your brother.

One dissenter on Twitter, however, made comparisons to professional sports and remarked that such concessions should be illegal. My feelings went from happiness to confusion.

I’ve remarked to my friends a number of times before that I think that professional sports teams should be able to concede matches as well. There’s really nothing worse than getting knocked out by a team that’s dead for the playoffs, and I don’t see the point in the Vikings playing their entire season. Of course, these people have contracts, and so they play.

We’ve seen such concessions in Magic previously that have caused some controversy. You’ll often see people scoop based on various pro levels, but it was probably brought most into the limelight back when SCG had an insane player’s club. Personally, I see nothing wrong with it and would scoop a player that I knew into such a club. I wouldn’t do such a thing for just anybody, particularly if I didn’t respect them as a player, but there were definitely some very deserving level 8s.

Ultimately, the real problem with not allowing concessions is that it’s miserable if you say nobody can concede under any circumstance and very difficult to enforce if you try to set guidelines.

Let’s start with the no tolerance approach. This causes players to play games that they are obviously losing and eliminates the ability to concede to save time in the round and/or mental agony. Slow control decks could easily play a ton of one-game matches with opponents forced to slowly lose. There’s a card game called Netrunner that has such a rule for their organized play and everybody hates it. They hate it because it’s awful. This rule would cause a ton of people to quit and would not achieve the goal of upholding the integrity of the game- not with people scumming the clock for one-game match wins. You can’t call slow play for not attacking with your creatures.

Trying to make specific guidelines for when a concession is illegal is tough, too. For example, if we said you couldn’t just sit down and fill out the match slip, how do we stop this from being faked? Are you supposed to monitor every hand that a player mulligans in the process of throwing a match and forcing them to keep “good” hands? Are we supposed to make them play at their highest level somehow? It’s pretty obvious how that’s impossible. And what if one player tells you that they have an emergency that they need to respond to? What are you going to say, “No, no, no. You have Magic to play!”.

I’ve made it pretty clear what side I take on this issue, but I’d be interested to hear some counterpoints. Keep in mind that comparisons to professional sports are pointless. If you want to make rules for Magic about conceding then you need to address the two problems that I’ve stated here, as they’re pretty damning.