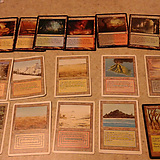 A friend of mine, Perry Stewart, is responsible for this sinking feeling in the pit of my stomach. He shared an Imgur gallery with reddit and Facebook last night and I think you should all see it. Before you click the link, be warned that you may scream involuntarily and these pictures are shocking and disturbing and may trigger the vomit reflex.

On my way home from GP Cleveland this weekend I was playing mental magic with my cube in the back seat of the car. Around midnight we had to pull over on the shoulder and after a while I set the cube down on the top of the car. Needless to say we drove off and I did not notice it was missing until I got home.

Well, today a couple of friends were nice enough to go "geocaching" for it on the highway at the border of Indiana and Ohio (we live in western Michigan - 3 hours away).

When we found it there wasn't a single card left in the box and we went on the most profitable Easter Egg hunt in history. The cards were in a ditch just off the shoulder in about a quarter mile stretch.

All in all, we found 311/360 cards and (probably) all of the basic lands. Notable cards lost to the elements are: Tundra Flooded strand Hallowed fountain Sacred Foundry Stomping ground (will update as I think of them)

The pictures in the link are as follows:

Needless to say, the last 24 hours have been a roller coaster. I would have liked to have gotten footage or a picture of all the cards lying in the grassy ditch, but the cards were still blowing in the wind as each car passed and time was of the essence. I hope you all appreciate my story and didn't cringe too much.

Perry is lucky the cards were there when he went back and that the sleeves took most of the brunt of the damage. Don't leave anything on top of your car, coffee cups, babies, or Magic cubes. Newton's pretty clear about what happens when the difference between the vehicle's velocity and the box's velocity is enough to overcome the coefficient of static friction. Or whatever the correct science words are.