Below are the total set prices for all redeemable sets on MTGO. All prices are current as of July 27th, 2015. The TCG Low and TCG Mid prices are the sum of each set’s individual card prices on TCG Player, either the low price or the mid-price respectively. 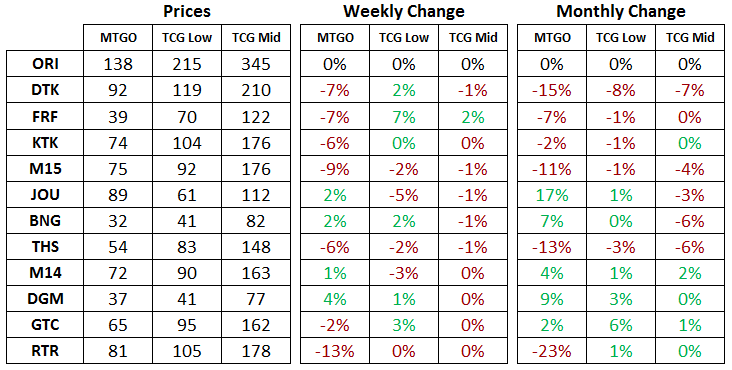 This week marks the introduction of ORI prices to the MTGO Market Report. Note that redemption for ORI is expected to open by the end of August.

Prices are mixed but with a negative slant this week with the start of ORI prereleases. The release of any new set strains the MTGO economy as the need for tix rises from both dealers and players. This is the liquidity crunch, which reduces the price of all singles and boosters. Savvy speculators who have been moving into tix in the last month can now start moving back into select singles and boosters.

The other big change that has affected prices is the announcement of Play Points (pps) which are a new type of prize awarded through entering constructed events. They will start being awarded at the conclusion of ORI release events. Play Points are an interesting addition to the MTGO economy. They are like awarding opened boosters, but they are flexible in that one can enter any draft or sealed event with them. Changing Constructed event prizes to include what amounts to draft entry tickets means that the value of prizes for Constructed play will be more stable over time than they have been in the past.

Being able to choose which Limited format to play with pps is a strong feature of this new award. As a result of this feature, there will be much less variation in the secondary market price of boosters. Awarding pps means players can decide which draft format best suits them. Usually this will be the most current draft format, but allowing players to choose their prize means there is a new release valve for market pressures. Previously daily events awarded the most current sets as prizes and this meant that prices on those boosters were under constant pressure. With pps going to be making up a large portion of constructed prizes, this pressure will be gone.

For most players the introduction of pps will be a positive change as jumping into a new draft queue will be much smoother without the need to access the secondary market in order to exchange cards or tix for the correct boosters. Reducing these transactional frictions and awarding something that players value will result in happier players that will end up playing more Magic. Players who only play Constructed will be able to continually enter Constructed events as long as their supply of pps hold ups.

The one subset of the playerbase that will be hurt are the grinders who relied on prizes from constructed Daily Events as a source of income. Being forced into higher variance Limited events in order to use up pps means that these players will not be able to rely on a steady stream of valuable digital objects. Grinders who are using MTGO as a possible stepping stone to the Pro Tour will be hurt less as they will be able to convert pps into PPTQ entry fees.

Sets of RTR are down significantly in the last month since RTR redemption sets went out of stock in the MTGO store. It's taken some time for the market to respond to this event but with the end of Modern season and the start of ORI events, the need for tix to enter events has trumped the utility of holding onto cards such as Jace, Architect of Thought or Steam Vents.

Without the support provided by redemption, there is no price floor on RTR singles so expect continued price weakness as the market seeks a new equilibrium. And for cards like Utvara Hellkite, which only gets utility from redemption, the price floor is not far off of zero.

GTC is a little lower this week as players sell their shock lands. With redemption on this set still open, value is flowing towards the mythic rares of the set. Look for a final window to sell any remaining cards from this set in early September.

Mutavault of M14 is off significantly since Goblin Piledriver was spoiled from ORI. 4 tix was the price that this card reached after rotating out of Standard, so with it currently at 5 tix this is getting to close to a very attractive entry point. All eyes on Standard at the moment so looking to opportunities in Modern staples is a good idea for speculators.

The two smalls sets of Theros block are up this week as players get interested in Standard one last time this summer, but THS and M15 are both off a significant amount. Although there is some potential in short-term speculative gains on cards from all of these sets, any price strength should be sold into. Look for a jump in staples and key cards this weekend as the Pro Tour unfolds.

All three Tarkir block sets are off by over 5% this week with the start of ORI prerelease events. This is a temporary dip in reaction to the announced changes to Constructed prizes as well as a normal sell off at the beginning of a set release. At the tail end of DTK and FRF drafting, both sets are at attractive prices on MTGO and relative to paper prices.

Once interest in ORI drafting levels off in the second half of August, interest in Tarkir block drafts will start to pick up again. Short-term gains in these boosters will be made by September before they dip again in October with the release of BFZ. Longer-term, DTK boosters will get back above 3 tix at some point in the winter and KTK boosters will also have a chance to crack 3 tix. FRF boosters have a more modest long-term target of 2+ tix.

ORI is the new set this week and its price is similar to where DTK started. DTK jumped to over 150 tix the week after it was released and ORI has a good chance to do something similar. Look for breakout cards this weekend at the Pro Tour to pump up the price of this set.

Many Modern staples have dropped further since last week. The combined action of ORI release events, Lee Sharpe’s announcement of the change to Play Points and a drop in Modern interest has put a lot of pressure on several cards.

Some, such as Aven Mindcensor, Rest in Peace, Obstinate Baloth and Abrupt Decay got pushed down to a one- or even two-year low. A large majority of Modern cards including format staples such as Snapcaster Mage, Inkmoth Nexus, Torpor Orb, Serum Visions, Azusa, Lost but Seeking and Through the Breach have gone back to their level from the Spring, their pre-Modern Masters 2015 list announcement level.

This sudden deflation of Modern prices is clearly visible on the Modern Total Format Price Index, which lost close to 15% of its value in two weeks. Although stabilized by speculators and players attracted by discounted prices, this drop will probably last at least until the end of ORI release events.

If you haven’t rebought some of the positions just sold a couple of weeks ago, this is a great opportunity to selectively purchase Modern staples for another speculative ride until October and the release of Battle for Zendikar. Buying a basket of the most playable Modern staples is, once again, a favored strategy in order to ensure an overall positive outcome.

Both Modern positions accumulated these days and MM2 positions acquired during the release of Modern Masters 2015 are expected to reach a short-term high at the end of September, which will be the next window for speculators to consider selling from their basket of Modern assets.

WotC is pulling off the financial support to Vintage Super League (VSL). Although it was entertaining to watch it may not have any effect on current Vintage prices but this news certainly won't help supporting this format though. A Patreon support system is likely to be set up to support the MTGO Vintage streaming.

Similarly to the Modern index, both Legacy (Total Format) and Vintage (VMA) indices lost about 10-15% value this past few days in reaction to last week's MTGO changes and the demand for Tix for ORI release events. The total VMA set value dipped, for the first time, under 500 Tix and the emblematic Black Lotus fell under the 100 Tix this week.

If the MTGO economy is all about supply and demand for these type of cards then Lotus will probably continue drifting down. Considering the existing non-support for Vintage, prices for Vintage-only cards have nowhere to go but down until they reach a floor, likely to be low, established by casual demand and a few speculators.

According to Lee Sharpe, it appears that the newly implemented structure, buy-in and prizes for Daily Events and 8-man queues may not favor Pauper and may have a chance to negatively impact Pauper prices in the mid- to long-run.

Several Pauper cards have already dropped quite a bit since last week. After steady and strong gains for the past three months, Mental Note abruptly dropped from 2.2 Tix last week to less than a Tix now. Both the Planeshift and Alara Reborn versions of Terminate, Unearth and Exclude also took a hit recently, although not as sudden Note.

Nonetheless, other Pauper staples such as Snap, Sunscape Familiar, Crypt Rat and the artifact lands remain stable or are even slightly on the rise.

Here as well it is not easy to dissociate the effects of ORI release events, MTGO tournament changes and natural price cycles. Significant drops from price heights are always a buying opportunity to consider. But speculators should proceed with caution before taking positions in a format that might lose part of its playerbase due to tournament structure changes.