Below are the total set prices for all redeemable sets on MTGO. All prices are current as of August 10th, 2015. The TCG Low and TCG Mid prices are the sum of each set’s individual card prices on TCG Player, either the low price or the mid-price respectively. 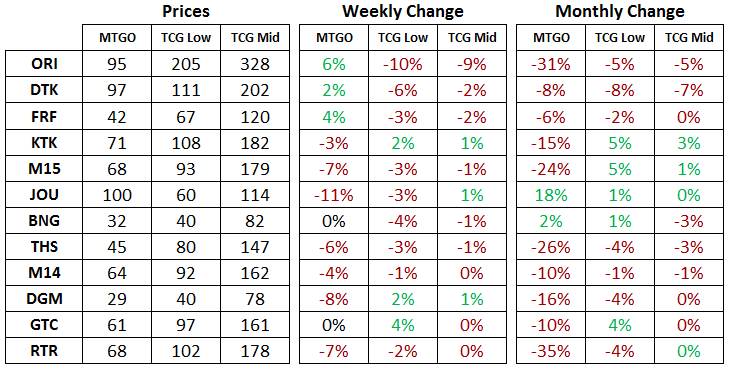 RTR continues it's downtrend this week with another 7% drop. The shocklands from this set are getting into oversold territory at around 2 tix, so be sure to fill out your playsets of these cards at current prices. Speculators should also consider adding RTR shocklands to their portfolios.

GTC shocklands should be considered more carefully. After RTR went offline for redemption, most rares and mythic rares of that set have steadily declined in price. This suggests that the best buying window for GTC shocklands will be early November when the redemption cutoff date is reached.

Worldspine Wurm is another buy low candidate from RTR. It recently featured as a four-of in the Grishoalbrand decks that seek to abuse Goryo's Vengeance and Through the Breach to cheat Griselbrand into play, and then use Nourishing Shoal and Worldspine Wurm to gain a bunch of life and draw the rest of the deck. Borborygmos Enraged from GTC is a finisher if need be.

After doing some recent testing of this in the two-man queues, I can attest to the power level and the seamless build of this deck. This deck is at least Tier 1.5 in Modern and its components should all be considered good speculative targets while interest in Modern is in a lull.

A brief spike in buying occurred last week due to the Pro Tour and the addition of Magic Origins to Standard. That interlude is over now with prices on these resuming their downward trend, both in paper and on MTGO.

Standard-playable cards from these sets won't reach their bottom until they rotate in October, but at that point mythic rares from THS or M15 will become good targets due to redemption. Once a bottom is in, cards like Xenagos, the Reveler will be an excellent target for steady gains over the winter as redeemers seek to capitalize on the predictable price disparity between MTGO sets and paper sets. Junk mythic rares priced at 0.4 tix or less from these sets are good long-term bets for the same reason.

Modern-playable cards can have a different trajectory and we can target cards from BNG and JOU as well. Often they bottom at a similar time as Standard-only cards, but if they are a staple like Liliana of the Veil, sometimes the bottom doesn't come and buying in September can be correct.

Outside of Thoughtseize, there are no cards at the power level of the ISD planeswalker, but Modern-playable cards to keep an eye on include Master of Waves, Thassa, God of the Sea, Chandra, Pyromaster, Chord of Calling, Courser of Kruphix, Keranos, God of Storms and Eidolon of the Great Revel.

The newest set released on MTGO saw a bounce up in the second week of release events. It very much appears that the bottom is in for the set as a whole, but that does mean that value can shift between cards. The price of most rares will continue to have a downward bias until the BFZ is released, but mythic rares will be more stable in price.

Paper prices on all three of the Tarkir block sets are going in a different direction than digital. Once the price of DTK and FRF stabilize in paper, this will be the first signal of an impending uptrend for these sets on MTGO. KTK appears to be in the early stages of its uptrend already with a monthly gain in both TCG Low and TCG Mid.

There will be a pause in any uptrend during BFZ release events as the new set takes center stage, but once dealers and players get their fill of the Fall release, higher prices will follow for the Tarkir block sets, in both paper and on MTGO.

Most Modern prices are bottoming this week and some have even started cycling back up. The price depreciation triggered by ORI release events created a lot of great buying opportunities for speculators and players. While most cards are likely to regain some value in the short term, speculators should always be cautious when selecting their targets and have reasonable expectations for their positions. After a summer that saw many Modern known staples and newcomers breaking their record high it might take a while (more than two or three months) to return to such heights.

Barely on anyone's radar until two months ago, Nourishing Shoal and Okina, Temple to the Grandfathers, for instance, broke out this summer. Whereas the green shoal has recovered to about 4 Tix after dropping under 2 Tix a month ago the temple has plunged back to a bulk price and has shown no signs of rebound so far. Nothing guarantees that Okina, Temple to the Grandfathers will rise to 2 Tix again anytime soon.

Previously mentioned Path to Exile, Aven Mindcensor and Shatterstorm appeared to have found a floor and have started gaining price strength again. These three Modern staples are well positioned for future profit as the price floor they found is fairly low compared to previous price peaks.

Torpor Orb is another Modern staple but with a different price history. After hitting a record 10 Tix a month ago the orb seems to have reach a floor at 4 Tix these days. If at its current price the speculative opportunity is decent, 4 Tix is nonetheless a relatively high price compared to the orb’s average price before this summer. If this NPH artifact stays clear of being reprinted, 10 Tix might be reached again but its short- to mid-term rebound is more likely to be in the 5-6 Tix range.

Prices have settled down a bit now but considering that we are entering a growth phase for Modern prices and that the ZEN fetchlands are not expected to be reprinted in the next year means that the price of Scalding Tarn and company are likely to keep climbing for the next month or two. The release of the Fall set signals a period of price weakness so speculators or players who have missed their chance on buying the ZEN fetchlands at a good price should save their Tix until October.

Overall, the approaching end of ORI release events should slowly ramp up Modern prices. Speculators should finish up their Modern acquisition with the end of September as a target.

Although the Total Legacy Price index suggests prices are bottoming, the top Legacy-only staples haven't moved much over the past several weeks. Modern-playable cards, led by the ten fetchlands this week, are mostly responsible for the price variations observed in the Legacy index. Less expensive Legacy cards are seeing some buying activity. As usual, looking at the weekly top winners and losers can help speculators identify trends and speculative opportunities.

From 8 Tix about a year ago, Karakas has seen its price decline accelerate since the release of MM2. Now below 3.5 Tix the legendary land seems to be poised to head even lower. This card has only been printed in Masters Edition III, a set that hasn’t been massively drafted, and has very low chances of reprint so keep an eye on this one.

Finally, Nimble Mongoose dropped sharply in the past two weeks to an all-time low of around 0.5 Tix. For all three of these cards and other Legacy playables, the Legacy MOCS this November is very likely to push prices higher.

The recently proposed MTGO prize and buy-in changes go live today. Play Points will be a part of the tournament landscape from now on and Pauper might be one of the formats negatively affected by these changes. It’s no easy task to anticipate the impact of such changes to the MTGO playerbase and economy, but to date Pauper price variations appear unaffected. In the absence of signs of global price depreciation, speculators should probably hold onto their positions and proceed carefully with further Pauper specs.

With the end of ORI release events, prices across the board, including Pauper, are expected to rise. A quick look at the Pauper metagame will show you that the most played decks remain more or less the same with Familiar and Mono-U Delver representing about a third of a fairly diverse field.