Below are the total set prices for all redeemable sets on MTGO. All prices are current as of August 24th, 2015. The TCG Low and TCG Mid prices are the sum of each set’s individual card prices on TCG Player, either the low price or the mid-price respectively. 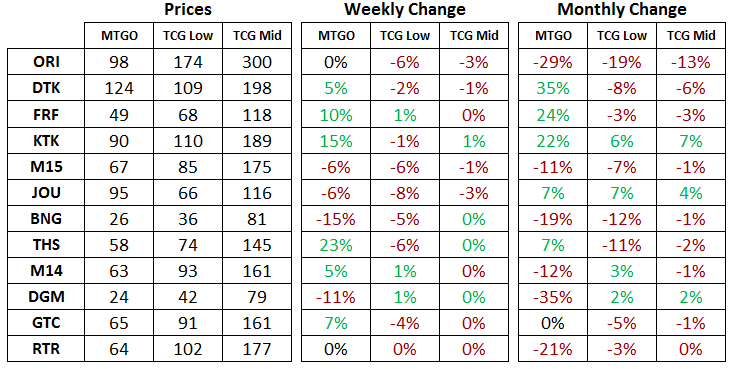 With the release of Battle for Zendikar on the horizon, it's time to get liquid by selling cards and boosters over the next couple of weeks. Selling now means that you won't be trying to sell during release events, which is when the MTGO economy experiences a liquidity crunch.

It's at that time that everyone needs tix, dealers in order to buy the new cards and players to enter release events. For speculators, trying to sell cards at that time means that you are doing the same thing everyone else is doing, and a good speculator should be doing the opposite of everyone else. Make sure to whip your portfolio into shape in advance of BFZ release events by selling down your positions and raising tix.

The attractive prices on the many Modern-playable rares in RTR have finally arrested the descent of this set. For example, Hallowed Fountain got down to 2 tix during ORI release events and it now sits at 3 tix. Abrupt Decay made a similar move, jumping 50% in the last week to land at 4.5 tix. The levels these cards bottomed at are worth noting for future buying opportunities.

The only card worth paying attention to in DGM continues to drift down as Voice of Resurgence is now available at 18.5 tix. Although a very tempting price for speculator, the window between now and the release of Battle for Zendikar is short enough that the potential upside relative to the potential downside is not favorable.

With a longer time frame the current price is attractive so buying now is suitable for players looking to get a playset. Speculators should wait until the BFZ release events get under way on MTGO.

Prices on cards from these sets continue to fluctuate with changes in the Standard metagame. Enjoy the last gasp of Theros block and M15 as they get set to rotate into being Modern-playable only. Once they do rotate, prices will start to come down rapidly and that's when speculators should have their tix ready to scoop up mythic rares (from M15 and THS) and other Modern playables from each of the sets.

Cards will bottom at different times, but sometime between October and November is a good rule of thumb to look for a buying window for cards from these sets.

ORI has held firm this past week at 98 tix for a complete set. Jace, Vryn's Prodigy at 29 tix continues to account for the largest portion of the set price. Set redemption for ORI opens this week, so the gap between the MTGO price and the paper prices will continue to narrow. After redemption opened last year for M15, it advanced from 91 tix in the last week of August to over 120 tix by the third week of September. M15 went on to average 116 tix between September 15th and October 31st of 2014. This suggests that ORI represents good value at current prices.

There will be a certain amount of speculative buying from all four of these sets as the official spoiler season for BFZ rolls out over the next few weeks. Players and speculators alike will do their best to analyze the power level of the new cards and they'll try to connect them to already in-print cards for new synergies and dynamics.

The reality of all this impending speculative activity is that it's impossible to predict how the new Standard metagame will unfold in October. After spoilers get going, most people will simply imagine the current format plus the new cards from BFZ. This type of additive prediction has its uses but the fact that Theros block and M15 are leaving Standard is more important to the future of the format than what BFZ is adding.

Sell into any hype generated by spoilers, particularly for non-staple rares from KTK, FRF and DTK. Cards from ORI should be excepted from this broad recommendation though. ORI is new enough that a substantial amount of supply is not yet present in the MTGO economy. If an ORI card turns out to be a Standard staple, the price bump it gets in October will only be the start of a long ascent into the winter. Selling too soon is a mistake that is easily made on cards from the core set.

The results posted this past weekend at SCG's Modern Open showcased ten different decks in the top ten spots of this event, further proof of the stability and diversity of Modern. This is good news for speculators as it multiplies speculative opportunities with many different cards, a shifting metagame and the constant resurrection of old archetypes.

Exhibit A is the deck that took the the tournament down, a forgotten Modern powerhouse--Jund. This result cannot be really called a come back as this was the only Jund list among the Top 32 finishers. Nonetheless it reminded everyone that Bob and Liliana are still a powerhouse deck foundation to consider in Modern and all of the Modern staples in the Jund deck are likely to see a little boost in the following weeks.

Despite a mediocre finish, Chris VanMeter’s Evolutionary Elves revisited the Elves archetype by packing Cloudstone Curio and Evolutionary Leap in the mix and omitting Collected Company. Consequently Cloudstone Curio jumped from ~1.2 Tix to more than 7 Tix earlier this week, an impressive gain it is unlikely to sustain.

As featured on the weekly winners list from Mtggoldfish.com, a lot of Modern staples have recorded a double-digit percentage gain this past week and some are reaching, or even breaking, previous record highs. It is always advisable to sell after strong gains, especially if those gains bring a card into uncharted price territory.

Tomorrow afternoon will feature Modern Constructed as part of the World Championship, and it might well be the perfect storm for some Modern specs. This special 24-man tournament may reveal a unique opportunity to showcase new deck strategies and could trigger crazy spikes, even if they last for just three days. Modern speculators should be ready to sell into any resulting spike in prices.

This past weekend also held the Eternal Weekend, featuring both the Vintage and Legacy Championships. Although paper results with these two eternal formats have a much weaker impact on MTGO than Modern, it is always worth noticing trends and deck variants.

In the Legacy Championship Bob Huang’s Grixis Delver took the trophy home with a full playset of Deathrite Shaman in his U/R Delver deck. Alongside a few copies of Gurmag Angler, four copies of the one-drop shaman appeared in several U/R Delver decklists this weekend; this seems to be the newest variant of URx Delver decklists.

Delver was clearly the dominant deck among the Top 32 finishers. Although posting several decklists among the Top 32, Miracles didn’t finish as strong as it did during the last two Legacy GPs. OmniTell and, more surprisingly, Lands were the two other archetypes well represented in the top 32.

In a field packed with Workshop decks, Brian Kelly’s Oath hybrid won the Vintage Championship. Hangarback Walker has already made a splash in Vintage as all the Workshop decks ran two or three copies of the ORI rare. Monastery Mentor confirmed its potential in Vintage as it was seen in several builds among the Top 32 finishers.

Another card to appear in many decklists during this event was Dack Fayden. Recently down to 7 Tix before ORI release events, the U/R planeswalker bounced back to 8 Tix earlier this week. Vintage is not a very good place to invest given its lack of support on MTGO, but Dack may be one of the very few VMA cards that have a chance to retain and gain value in the long run.

The Pauper outlook is very much unchanged from last week. Prices are still fairly stable and, on average, in an upward trend. Continuing its ascension, Stompy has became the most popular Pauper deck this week. In contrast, Familiar represents a smaller share of the Pauper metagame than a couple of weeks ago, though Sunscape Familiar is still on a steady rise and has passed the 3 Tix price tag.

Benefiting from the burst in popularity of Mono-Black Control, Chittering Rats, Oubliette, Cuombajj Witches and Unearth also increased in price over the past week.

Flirting with the 2 Tix mark a month ago, Mental Note is back around 1 Tix as Angler Delver has lost some appeal. For the same reason Ghastly Demise is also dropping from 1.5 Tix to 0.3 Tix now. Both represent a decent speculative opportunity at this price for Pauper speculators.

Stony Silence has fully met our expectations and is now cruising around 3.5 Tix, having broken its previous record high of 3 Tix. This enchantment also has a low chance of being impacted by the Modern part of tomorrow's World Championship. Given its current price and a +100% increase since we recommended it a month ago we think it's a good time to close this position.