Below are the total set prices for all redeemable sets on MTGO. All prices are current as of August 3rd, 2015. The TCG Low and TCG Mid prices are the sum of each set’s individual card prices on TCG Player, either the low price or the mid-price respectively. 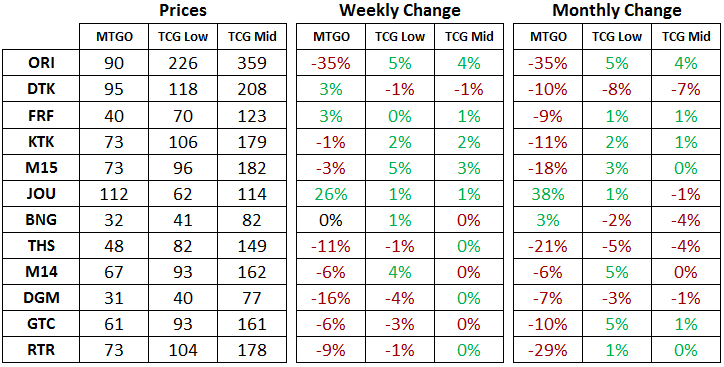 On the long-term viability of MTGO, the Organized Play announcement from WoTC at PT Origins means that Regional PTQs are coming to MTGO. This is an interesting development in that WoTC has decided the best way to serve the paper market in this regard is to make Regional PTQs available online. It could also mean that foil Liliana of the Veil promos could be coming to the MTGO economy via these events.

As a personal anecdote, I drove two hours to unceremoniously 0-1 drop at the RPTQ in Montreal earlier this year. In comparison, my first round opponent had driven two days all the way from Nova Scotia, with young children in the car! My opponent is the exact type of player that this change will cater to--making RPTQs available on MTGO will serve players who have to go an extraordinary distance in time or space in order to play in these events. This development will further cement the long-term viability of meaningful Constructed play on MTGO.

The introduction of Play Points and the changes to Daily Events has introduced uncertainty in the MTGO economy about the future of Constructed. Over the long run though, Constructed play on MTGO has always bounced back and with it the price of singles. This time will be no different.

Sets of RTR continue to fall, off another 9% in the past week. While M14, GTC and DGM are still redeemable, they saw steep drops with the opening of ORI release event queues and the ongoing shift of player interest away from Modern. The window of redemption on these sets is drawing to a close, but there should be one last burst of buying interest before that happens in November.

Modern-playable cards from these sets are close to being on sale. Voice of Resurgence from DGM is getting closer to a very attractive price level and M14 Mutavault is near its post-rotation floor. Players looking to fill out their playsets should consider these to be at a reasonable price, while speculators should definitely have them on their radar.

JOU is up an astounding 26% this week on the back of the Mono-Red and the U/R Artifacts decks that showed up at PT Origins. Temple of Epiphany has more than doubled in the past week, and Eidolon of the Great Revel is back over 20 tix. The blue-red scry land will have a long way to drop after rotation, but the red two-drop will find a floor somewhere in the 5-12 tix range due to being a staple of Modern and Legacy burn decks.

On the other hand, THS is down significantly in the past week. This is the perfect time to be on the lookout for cheap mythic rares from this set. Although Standard-playable cards will typically bottom after rotating out of Standard, junk mythic rares tend to reach attractive price levels in the months prior to rotation.

Currently both Hythonia the Cruel and Underworld Cerberus are below 0.3 tix and should both be considered a buy. Most of the mythic rares from redeemable large sets eventually end up being higher than 1 tix after they rotate out of Standard. There will be cards that don't move higher than 1 tix though, so be sure to buy a basket of the junk mythic rares. Buying more than 10 playsets of a given card will also require some patience when exiting the trade as bots will adjust their buy prices as you sell your copies.

The ORI release events continue and the gap between a digital set and the sum of TCG Low prices is a massive $111 after accounting for the redemption fee of $25. This is attributed to the relatively weak showing of ORI cards at the Pro Tour. Although Abbot of Keral Keep and Hangarback Walker were the breakout cards this weekend, ORI is an interesting set that will take longer to understand and to integrate into all of the constructed formats.

On top of not making a huge dent in Standard, there are other factors holding the price of this set lower than a typical large set release. The reprinting of the opposing-colour pain lands reduces the value of the set. Combined with the summer lull in Standard and the uncertainty around the introduction of Play Points on MTGO, all of these factors  have resulted in depressed prices relative to other new sets. Last year, M15 bottomed at 90 tix or so closer to the end of August, and ORI is currently at that mark. With excellent long-term potential, the time to be stocking up on ORI is almost at hand.

The three Tarkir block sets have been stable in price in the past week, which is a good sign after the recent dip. Although ORI should be the set to focus on in the next month, the buying window on these sets is still slightly open. If there's a pet card that you believe in as a spec, look to accumulate that card over the next month before available supply starts to dry up.

In the wake of ORI release events, Modern prices are, on average, still declining this week. However, and as it started last week, several Modern staples are reaching a floor and rebounding this week as well. Therefore, this week again, speculators should find very good buying opportunity on proven Modern staples.

From a 6-Tix high reached at the end of June, Shatterstorm of M10 has dropped to 1 Tix and might have bottomed at that price. Orzhov Pontiff has rebounded from 1.2 Tix and is now in the neighborhood of 2 Tix. This three-drop creature was at a top of about 10 Tix when U/R Cruise/Pyromancer decks were dominating Modern last Fall and Birthing Pod decks were running this card in response.

It won't reach 10 Tix again anytime soon, but Guildpact is an old enough set that only a small increase in demand would be enough to push the pontiff into the 4-5 Tix range, similar to what happened just prior to the release of MM2.

Other Modern staples to keep an eye on as they are reaching a tipping point include Shadow of Doubt, Dryad Arbor, Fauna Shaman and Path to Exile. One way to detect more of these Modern positions that have lost a significant chunk of their value over the past few days is to look at the Modern Staples price fluctuations and sort them by weekly percentage loss. By looking at the biggest losers, speculators can identify good buying opportunities such as these.

The week before the release of Battle for Zendikar is likely to be a good selling window for many of the Modern speculations started between the release of MM2 and now. This is what makes current Modern specs very attractive, since they have the potential to double in price in barely two to three months.

Legacy and Vintage prices have been less sensitive than Modern ones to current seasonal fluctuations. The Total Legacy Format price has dipped a little bit, mostly due to some of the cards used to calculate the Legacy index also being played in Modern.

Some Legacy staples, including Force of Will, Cabal Therapy and Stoneforge Mystic, have lost value over these past few weeks. Mystic actually dropped to an 18-month low and represents a good buying target with the November Legacy MOCS in mind. Other staples such as Infernal Tutor and Show and Tell are slightly on the rise, while several other Legacy staples, such as Rishadan Port, Misdirection and the dual lands, remain flat.

Another week has past and another record low was reached by Black Lotus. The legendary artifact could be found for under 85 Tix on Goatbots and Mtgotraders earlier this week. A P9 playset can now be acquired for less than 300 Tix on MTGO. Although Vintage is getting more and more expensive in paper Magic, the same format has never been cheaper on MTGO.

Pauper positions were only moderately affected by ORI release events. Prices keep cycling up and down creating constant buying and selling opportunities for attentive speculators.

Familiar and Delver decks have been the most played archetypes for the past several weeks now. Sunscape Familiar is inching up from its low point reached earlier in July whereas Snap seems to have reached a plateau at around 3 Tix.

Innocent Blood is not really part of any Pauper deck these days, not even Mono-Black Devotion decks. As a consequence its price has dipped to 0.2 Tix this past weekend, a record low. Although the black sorcery doesn’t have any real short-term upside right now, speculators willing to wait several months for a rebound might consider it a good opportunity.

Another black card represents a better opportunity, namely Chittering Rats. The Rats have shown a quite regular fluctuating pattern over the last two years, oscillating between 0.2 and 1.5 Tix. This card reached the 0.2 Tix floor again yesterday.