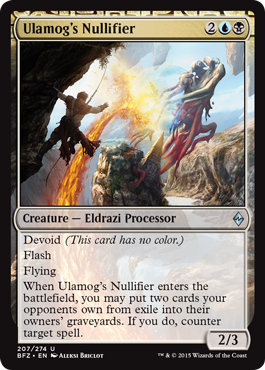 Commons and Uncommons are an unlikely source of revenue, but they can really help to pad your collection and your margins.  People always need them and seem to have a mental block about getting and keeping them.  They take almost no effort to acquire, and often people will just give them away.

I like to target foils because they can command significant premiums above their non-foil counterparts.  People at prereleases often don't care about their foils, so they're glad to trade them away at a discount for stuff they really care about.  That's what trading is all about; moving cards from where they're not wanted to where they are, and taking a bit of a cut in the middle.  It's a service, above all else.

So, here are the 17 cards that caught my eye while browsing the spoilers.  We'll be talking about the rares Ad Nauseam throughout the week, but I wanted to plant this idea before you spend all your time trying to find the next Hangarback Walker.

This is one of my favorite situational counterspells.  I have a huge soft spot for things like this, Force Spike, Stubborn Denial and their ilk.  This card is going to look totally amazing in foil.  It could easily command a buck or two in time, and most casual players at their pre-release won't even remotely care.  I want four immediately, and I don't even foil out decks!

I love linear decks and anthem effects, and I love it when 'tribal' synergies are so broad.  I doubt there are enough colorless creatures (aside from artifacts that care about other artifacts) to warrant this being played outside Standard, but I could see a Commander deck built around colorless, just for fun.  It's aggressively costed and helps you press a board advantage, turning Scion tokens into big threats in short order.

It's also a really good followup to some early turn shenanigans with...

No Standard deck based around the Ingest mechanic could exist without strong 1-drops, and I must admit I was hoping to see a rare Savannah Lions type card here.  But, we have a pair of competent 1-drops (with the blue one being, Shockingly better) that can hold Ghostfire Blade and hold their own in combat.  To do the really nasty stuff with Ingest, you need enablers and that's what these guys are.

I doubt this is good enough to see competitive constructed play, but I think it's an important card for Commander decks.  Ways to turn creatures into card advantage are not necessarily abundant, and it combos very well with one of my favorite cards in the set, Smothering Abomination.   It doesn't play nice with Scions, but beyond that I think there are a host of useful applications here in casual formats.

I am shocked this card is so big for its cost.  It makes your Scions markedly harder to kill, and it's a 2-drop that can block Siege Rhino (I know we're all sick of hearing it but that card still defines a format).  It's another important tribal card and I anticipate the foils will also look spectacular.

This card feels like it's powerful, but I think it's just too grindy to be good in Standard.  Still though, I love cantripping token generators.  This could end up being a useful enabler for the bigger Ingest effects, so I'd like to have some copies of the foil just in case it turns out to be important. It does a lot for 3 mana, but it does nothing specifically well.  It has the hallmarks of a control deck "grind you out with value" card, and I'm keen to see if it actually draws any Pro interest.

This is a key card for an Allies deck; in multiples, can take over a game quickly.  It gives much-needed tempo, and keeps you in the game until you can draw your big allies.  I would LOVE to cast this with Gideon, Ally of Zendikar on a subsequent turn, as that advantage will end up being worth a lot over time.  It's also a Vampire creature, for what that's worth.  I have not heard much about people loving vamps lately (maybe that Twilight garbage has run its course?) but it's always a tick in the right box for a new card.

5 damage is a huge amount, able to kill most anything (including stupid old Siege Rhino).  Sorcery speed is a big drawback, and I imagine that you will occasionally be caught without a card to un-exile.  Still, it could be an important card in the Eldrazi Control decks that are spawning all over the place.  It's big-time removal, but it might be more exciting to cast Titan's Presence instead (though you need to draw your big guys to make it happen).  Still, I want to own this uncommon as I can see it finding a home and becoming more-than-bulk.

Aw heck yeah!  My stupid G/W Pauper deck has a replacement for the miserable Tukatongue Thallid!  Seriously though, this card is a 2-for-1 that gets better when it dies.  I desperately want it to wear a Ghostfire Blade, as it can really bring the beat down.  The mana boost is great too, as you can just cash in your token when you want to cast a real threat.  It does everything I want for a single green mana.  Sign me up.

This card didn't exist yet?  Well, now it does.  This seems like a great compromise between cards like Untamed Wilds and Rampant Growth.  I can see control decks wanting to run this because it will always replace itself, and it ramps your mana.  The only reason it's viable is because the opportunity cost of casting is very low; you can just pop it off at the end of your opponent's turn to surprise them with a (potentially) more substantial monster on your following turn.  Another card I think has big time potential that is worth owning in foil.

This could be a monster blowout if things fall the right way.  The obvious dream is to put an extra shield on Undergrowth Champion with the landfall trigger and murder whatever tried to block or attack through it.  It's an awesome way to ramp your mana and potentially steal some board position in the mid-game.  The drawback of needing a land in your hand is not negligible, but it's generally something doable.  But, without one it's a really poor Giant Growth, a card that doesn't see constructed play.

Izzet is my favorite color combination, and looking at some of the colorless spells I want to cast (like Oblivion Sower) I'm glad to pay 3 mana to block until I can cast one and cheat a turn of mana.  Ghostfire Blade is terrifying with this card, as a 4/6 can smash through a lot of things.  Then again, Ghostfire is working out to be good with a lot of things.  This card has serious long-term potential and I want to own a foil playset asap.

Let's be real, the only reason we're talking about a UB Eldrazi Control deck is because of this card.  Don't lose sight of the fact that a 2/3 for 4 is seriously below power-level, even with Flash.  However, catching an important spell in the midgame with this as a 2-for-1 is brutal.  This might be the most important reason to play cards like Transgress the Mind and Processor Assault I can think of.  Perhaps a Grixis colored deck could support all of these cards.  I know I'll be brewing with this in mind.

As stated above, I think that this is important because it sets up cards like Ulamog's Nullifier.  Without that value implied, this card probably wouldn't see much play.  In light of that, however, I think it becomes a reason why the Eldrazi Control decks will work (if they do indeed). Unless you totally whiff on this, you're probably removing something like an Undergrowth Champion, which is worth killing for 2 mana proactively.

Wow, this is a card?  These spell-lands are more exciting than the creature lands!  Yeah, 5 to Diabolic Edict someone is pretty steep, but the opportunity cost is almsot nil.  Decks that play these can't play the new Converge mechanic, but I think that's just fine when your lands are removal spells.  What is going on in this crazy plane?

I saved the best for last.  Wait, for real?  Am I the only one who is shocked this card exists?  I remember Krosan Verge from back in the day and I loved that card.  A land that's a 2-for-1, mana acceleration, and it enters the battlefield untapped?  Forget about it.  This is crazy.  I'm not even thinking about landfall triggers yet, which could prove to be significantly more important depending on the prevalence of Undergrowth Champion (one of my favorite cards in the set, if that's not abundantly clear yet).

So, those are 17 cards that I want to own in foil if anyone opens them at my pre-release.  This set has a ton of great commons and uncommons, so while everyone is chasing after Expeditions and trying to figure out which over-saturated rare is going to be their next mistake, scoop these off draft reject tables and offer to trade people for their sealed pool after the event is over.  I just have a feeling that some of the uncommons in this set will end up being as important as some of the rares.