For this week I had planned on working on an article about analyzing your customers and the tools you can use for that--until I saw the Battle for Zendikar spoilers announced when I got up on Sunday morning. We got not one but two huge revelations. 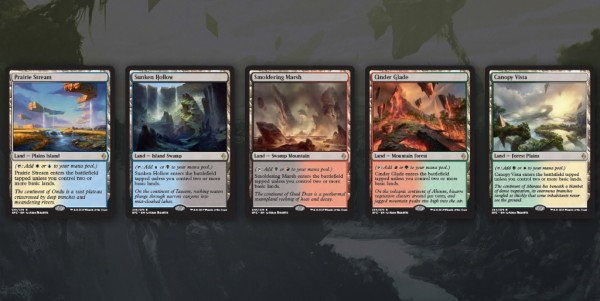 and 2) "expeditions," similar to the hidden treasures from the first print run of Zendikar. 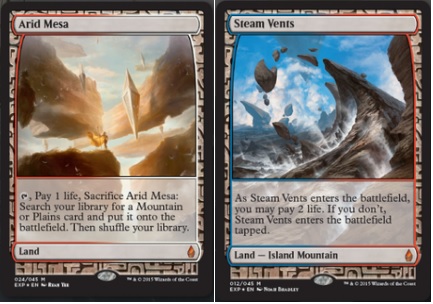 There are 25 different lands in Battle for Zendikar with this treatment. Mark Rosewater stated that it would be two sets of 10 and one set of 5 and since they also spoiled the BFZ duals full-arted it appears that we'll get all 10 fetchlands and shocks full-arted as well. These will likely command some exceedingly high prices starting out, though I feel like their inclusion alone will cause massive amounts of BFZ to be opened.

Other valuable information relating to these "expeditions":

What this means is that they will likely command a high premium out of the gates (the only place I can see anyone trying to sell them is on eBay at $199 for the Arid Mesa). This premium may drop a bit assuming the set is opened as widely as expected.

So What Does This Mean?

The bigger question is what does this do to older versions of these cards (the Zendikar fetches, Khans fetchlands, and shocklands). If people really like the artwork (currently it seems to be getting mixed reviews) then these could become the newest "pimp" version of the cards, though I imagine they are probably still less rare than original pack foils. However, these will assuredly affect the prices of the current "pimpest" versions in some way.

The other important thing to keep in mind is that given the values of their current counterparts, I feel like they will likely fall into three distinct camps:

The other big question is now what will the ones in Oath of the Gatewatch be. It's actually a bit odd that WoTC would put both fetches and shocks in the first set as both are some of the most desirable lands that they are willing to reprint (and thus will drive demand for product by a great deal). Given WoTC's desire to complete cycles it seems pretty safe to assume that the enemy duals (to match the BFZ ones) will be in Oath and will also get this "expedition" treatment. So that means there would be 15 more options.

This is awkward because it implies we can have another full set of 10 for one other dual land cycle, but there's five remaining, which is only half a cycle (or something like mono-color lands). At this point we can only speculate on the remaining lands, but assuming that WoTC sticks to reprinting lands that already exist we have the following options (ranked in order of current secondary market value) for the 10 spot.

Keep these cycles in mind if we start to see the expeditions affecting previous versions on the secondary market.

Also note that unlike the Zendikar treasures it doesn't appear that these will be limited to "first print run," so if product demand remains high, then a lot of them will be opened over the long run. This means the value of any given BFZ rare will be severely limited.

The most valuable rare in Khans is Dig Through Time at around $5.50 and the second most valuable is Siege Rhino at $3.80 (TCG Mid Values as of 8/30/15). Even the most valuable Khans mythic is only $8 (Sorin, Solemn Visitor); so the ceiling for the set is actually pretty low.

To me, this also means that unless you need a card immediately for a tournament, preordering this set is an extremely bad idea, unless you're very sure on the card (i.e. Hangarback Walker).

The fact that these are not redeemable is also very important. MTGO Redemption greatly increases the paper card supply on the secondary market, so these expeditions will not get a price drop when redemption starts (as we often see with most other Standard cards) and their MTGO price will likely be far lower than their paper price.

I kind of glossed over these originally in my haste to get to the "expeditions" because they have more financial relevance, but it's important to try and evaluate the BFZ duals properly.

2 thoughts on “Insider: Battle for Zendikar Spoilers and You”