Below are the total set prices for all redeemable sets on MTGO. All prices are current as of October 5th, 2015. The TCG Low and TCG Mid prices are the sum of each set’s individual card prices on TCG Player, either the low price or the mid price respectively. 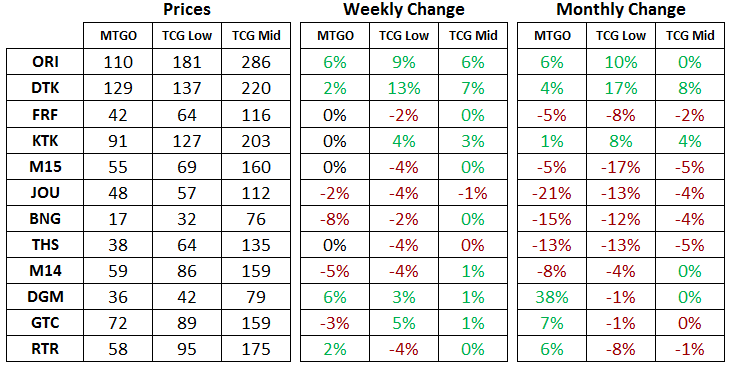 With Standard about to go through Fall rotation for the last time under the old system, speculators and players should pay close attention to Theros block and M15. Focus on the cards that hold value through Modern play or redemption.

Next month will be a key time to buy cards. Savvy speculators should be ready to deploy their tix while players and bot owners are preoccupied with the new cards from Battle for Zendikar.

The redemption cutoff date on GTC, DGM and M14 is set to hit in November. After rotation on Wednesday, set prices for RTR, GTC, DGM and M14 will no longer be included in the Weekly Report. Be sure to sell any mythic rare from these sets after BFZ release events wind down.

When RTR went offline for redemption, it took a large chunk of value out of the set, eventually reflected in lower prices for every card. Even the shocklands came down in price. Look for a similar transition for rares and mythics from GTC and M14.

This means a buying opportunity in November on Modern-playable cards like the shocklands, Scavenging Ooze and Mutavault. Chandra, Pyromaster sees sporadic play in Modern as well, so pay attention to her price too.

The price of a set of THS on MTGO has been stable for nearly one month. Modern and Legacy staple Thoughtseize is just above its floor of 5 tix, an excellent price to acquire such a highly played card. There are no guarantees, but we can get a good idea of its likely trajectory by looking at the example of Snapcaster Mage.

Snapcaster Mage bottomed at just under 5 tix after rotating and went on to hit 10 tix by the end of that Winter. Its current price of 21 tix suggests that patient long-term speculators will get steady returns buying Thoughtseize and waiting 12+ months. With the introduction of Modern leagues and a slowly improving client, the long-term growth of Modern staples seems a given.

Sitting at 0.5 tix, Polukranos, World Eater is getting close to excellent value for a junk mythic rare. Buy this one if it dips to 0.4 tix or less. Elsewhere on the junk mythic front, Xenagos, the Reveler is holding above 1 tix and should be considered a buy at current prices.

Keep an eye on the two other planeswalkers from THS as well. Planeswalkers typically hold a higher price than junk mythic rares, even if they see no Modern play. Ashiok, Nightmare Weaver has seen fringe Modern play so be sure to put this card in your basket when considering cards from THS. 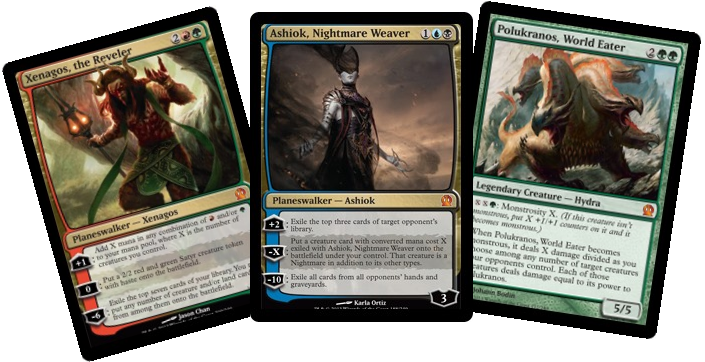 M15 has seen relatively stable prices in recent weeks and it too appears to have found a price bottom. After the recent interest in Slivers spiked the price of Sliver Hivelord, this card is set for further gains into the Winter.

Elsewhere, although BNG and JOU are not expected to generate much demand from redeemers, acquiring Modern-playable cards rotating out of Standard is still a viable strategy.

At 1 tix, it can't be certain that Courser of Kruphix has found a price bottom. However, it currently represents good value to both players and speculators. Players should have no concerns about ponying up 4 tix for a playset and speculators should be getting ready to buy if the price dips.

Eidolon of the Great Revel presents an interesting challenge to speculators, as it is clearly inflated relative to other Modern-playable rares from THS block. Caution is warranted heading into BFZ release events as players will look to high value cards in their collection to liquidate into tix. Any selloff of this card, which anchors the burn archetype in both Modern and Legacy, will represent a good buying opportunity.

Both paper and digital sets of ORI are up substantially this week on the back of Jace, Vryn's Prodigy.

The value proposition that ORI represents for redeemers continues, and it's setting up to be another speculative winner. Although short-term price increases have heavily favored Jace, other cards like Hangarback Walker will continue to be played in many decks in Standard. As set prices in both paper and digital settle down, value will continue to accrue to all mythic rares and Standard-playable rares.

The gap between TCG Low and MTGO prices for Magic Origins signals there will be steady demand for redeemed sets. The positive outlook for sets of ORI on MTGO will only diminish when online prices rise or paper prices come down, in either case closing the gap.

The three Tarkir block sets will all see some steady gains heading into the Winter, although the broad buying opportunity on these sets has long since passed. Speculators should look to sell selective holdings from these sets, depending how the Fall Standard metagame develops.

Cards that see play early on tend to be played later as well. Don't be afraid to ride price increases into the Winter on Standard staples, and sell off cards that do precisely nothing.

Early on, the fate of the DTK planeswalkers in Standard looks grim. Both Narset Transcendent and Sarkhan Unbroken were no-shows at SCG Indianapolis, the first big event of Fall Standard. If this continues, a price drop is inevitable. Both cards have proven to be duds in the Standard format that just rotated, and there is little to suggest their impending emergence in the Standard metagame.

Modern prices are currently in a transition period. On average, prices have dropped a bit in the past few weeks and seem to have found a floor earlier in September.

That being said, and as we discussed in previous MTGO Market Reports, price trends can be markedly different from one Modern card to another. There’s no optimal “one size fits all” strategy that applies here and some positions are good to sell now while others are good to buy.

Based on the price trends observed during previous Fall set releases (KTK, THS and RTR), expect additional price drops once BFZ hits MTGO. These price drops may last for two to three weeks, as shown in the graph below. With this in mind it may be a good time for speculators to sell Modern positions that have nicely rebounded over the past few weeks. This includes Horizon Canopy, Grove of the Burnwillows, Mox Opal, Scapeshift, Glimmervoid, Arcbound Ravager, Amulet of Vigor and Oblivion Stone.

With an anticipated price drop for the next two weeks or so, even speculators that typically avoid Modern may want to stock up on Modern positions. Some, including Through the Breach, Blood Moon, Torpor Orb or Thalia, Guardian of Thraben, are already at a decent buying price and would represent great speculative opportunities with an additional discount of 20% or more.

Thalia is also suffering from the promo version distributed to any account logged in during the Community Cup. It would not be surprising to see her price drop below 1 Tix.

From its bulk price back in February, Jwari Shapeshifter is currently above 1 Tix and could easily see further increases if Allies variants take off. As yet another tribal strategy in Modern, Allies may also contribute to push the price of Cavern of Souls higher.

Major Legacy and Vintage staples remains mostly flat again this week. While P9 pieces are slightly on the rise, most of the VMA mythics keep losing ground. Vintage is still a format to avoid for speculators.

Last weekend's SCG Legacy Premier IQ was not only the first major Legacy tournament with BFZ but also one of the first big tournaments after the banning of Dig Through Time. Whether an effect of the ban or not, only one Miracles deck showed up in the Top 32 decklists. Only two Show and Tell decks finished in the Top 32 as well, but they got 2nd and 3rd.

And the most represented deck in the Top 32? Death and Taxes, piloted by four players. Three of them, who finished 10th, 11th and 12th, included the ORI rare Vryn Wingmare.

Prices continue to fluctuate as popular decks rotate in Pauper. This week, Tortured Existence--a common from Stronghold--made a return to Pauper's most played decks.

After a spike over 1 Tix around the THS release, the black enchantment fell back to bulk prices for almost two years before starting to rise again soon after ORI's release. The steady upward trend initiated in August hit a peak earlier this week, this time with a price tag of 2 Tix.

Along with Crypt Rats, Tortured Existence makes up half the cost of the inexpensive creature-recurring archetype in Pauper. With such a high price and only a single printing in Stronghold, this black enchantment should definitely be back on Pauper speculators' radar.

Similarly to Modern, average Pauper prices may suffer seasonal price drops due to BFZ. This might also be a good time to stock up on common specs that reach a floor in the coming week.