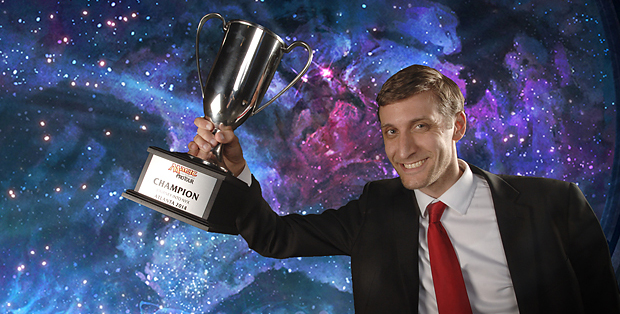 It's not every day you get to chat with some of the best Magic players around, but today's not just "every day", it's Pro Tour Friday! I've composed a suite of 5 short questions that Pros can quickly answer in between rounds, which I think will give us a great snapshot of what the best of the best are thinking coming into this weekend.  Here's a run-down of what they said*.

First, what's your favorite BFZ card and why?

Patrick Chapin: Ob Nixilis - I like drawing cards and it's fun.

Owen Turtenwald: Woodland Wanderer - just a cool card, fun, giant, not boring because you need to play it in a 4-color deck. Most fun

What card do you hope you don't have to play against this weekend?

Patrick: The Great Aurora - if someone casts it against me I missed something in testing, and if it's on the stack i'm probably already losing.

Are there any cards that surprised you or your team in testing, either by over- or under-performing?

Patrick: Silkwrap overperformed - it's the only card for 2 or less mana that can beat a Jace or Hangarback Walker on the draw. Despise too, for similar reasons. Duress, Negate, both are really good, too.

Shaun: Clash of Wills, it's not on everyone's radar.

Patrick: Ulamog, It's like Dragonlord Atarka for only 3 more mana!

Owen: Ultimate Price - every deck has Jace, so its a great cheap answer. Not as popular as expected.

In a few words, what is the key to BFZ Standard?

You can expect many more of these throughout the weekend as we continue our live on-site coverage of Pro Tour: Battle for Zendikar, only for QS Insiders!

* These are paraphrased answers, not exact quotes, but they accurately represent what was said!