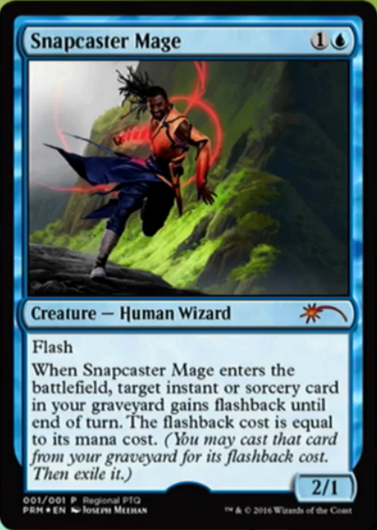 This weekend at the PT WotC announced next year's RPTQ promo as being Snapcaster Mage. This was a reprint that people were hoping for when Tiago's price skyrocketed earlier this year.

That said, an RPTQ reprint isn't going to impact the price of Snapcaster Mage they way that players would hope. If you look at the price history of Liliana of the Veil, its promo printing didn't impact that card other than arguably slowing its growth. Snapcaster's price has been in decline since its most recent spike though, and its currently around $50. The RPTQ promo printing makes it seem unlikely that Tiago will be showing up in the next Modern Masters, and as such now might be the best time to buy for a while. Especially if people are fearfully selling off of their copies.