Grands Prix mean something different to every player. For some they evoke high level competition, while others hear those words alongside the cha-ching sound of profit ringing in their ears.

For me, a Grand Prix is always a bit of both. I treat each Grand Prix as more of a convention, similar to Origins or Gen Con. These trips are a time to rev up the competitive engine, make some money, and also have a ton of fun.

My outlook differs from that of some of my friends. One friend sees this as the time to scour the dealer booths for a good deal, sell some cards, and complete collection goals he set for himself at the beginning of the trip. Another friend enjoys chaining side events to win as many boxes as possible.

Whatever your goal, there's a metric ton of fun to be had.

My number one goal for any large event, such as Grand Prix Pittsburgh this past weekend, is to take each match one game at a time and end up with a spot for Day 2. Reaching this goal often requires knowledge of the format, getting an edge with unexpected cards or strategies, and a little luck.

Here's the deck I sleeved up for my hometown GP.

Birthing Pod, oh how I loved thee---but just because you’re gone doesn’t mean I’m going to stop hanging out with your friends.

Even without Pod, the old archetype's supporting cast is still strong. Chord of Calling remains one of the best tutors in the format. Many players moved from a deck like this to a more aggressive Collected Company shell. But I still believe in Restoration Angel, which forms the centerpiece of the Kiki Chord strategy.

My main reason for standing strong behind this strategy is its adaptability and overall strength against the format at large. Chord of Calling can find Reclamation Sage against Affinity, Orzhov Pontiff against tokens, or Sin Collector against Grixis Control. Add in access to any number of other silver bullets and you have a strong core to build around.

Previous versions of this deck have focused on assembling the combo and lacked an aggressive strategy that could legitimately win the game. This version, while lacking in Birthing Pod power, revs up its fighting strength with lines like Blade Splicer into Restoration Angel.

In terms of tournament success, this Grand Prix seemed far out of reach. My opponents were drawing the second Galvanic Blast off the top to kill me exactly in game three, or using Tron to cast Ulamog, the Ceaseless Hunger against my land-light draw. Meanwhile I was flooding or struggling to cast my spells.

The games where I drew an acceptable mix of lands and spells were winning endeavors, but otherwise I was left helping my opponents’ tie breakers.

Speaking of Tron, it picked up some sweet high-cost spells from recent sets which have pushed the power of the archetype. Take a look at this version that made Top 32:

Ulamog’s evolved form is tremendous. Being able to blow up two permanents regardless of whether or not it resolves is astoundingly good. I even spoke to a couple players that pulled off successful mill victories. Come prepared, or Ulamog’s going to eat you.

This strategy is clearly improved from previous versions, but players are bringing their hate cards to battle the new and improved threat. I’m seeing more Blood Moons, Stony Silences and Crumble to Dusts than ever before. So, if you want to ramp into giant monsters, you need a plan of action against these hate cards.

The GP is rare where in addition to my competitive drive, I don't also have a financial agenda. For this event, I was looking to unload a couple spec targets, as well as some unnecessary Tiny Leaders cards.

Lately I’ve been hearing a dragon’s hoard worth of complaints about the financial cost of Magic. When players start complaining about prices, I am always quick to remind them that their collection can start making these purchases for them. If cards in general are more valuable now, that goes for your cards too.

In Magic, we take on many side quests. In addition to building your latest Standard or Modern deck, there will always be fads like Tiny Leaders. While my love for that format continues, the availability of opponents dried up. Don’t let those fun projects turn into a Ruinous Path. Put them in your trade binder or unload them via the selling method you prefer.

These days we're flooded with options for selling our cards. Do you take the store route and list everything on eBay or TCG Player, or do you find the best buy prices to liquidate large amounts of cards quickly? Having more options may seem daunting, but it's ultimately a good thing if you take the time to sort through them all.

One of the big perks of a Grand Prix is the dealer booth selection. Most Grands Prix have ten or more dealers buying and selling cards all weekend long. Your mission, should you choose to accept it, is to determine which dealers are offering the best value for the cards you're trying to move.

Every store has a different outlook on buying. The amount of store credit bonus offered, if any, may differ, and every store has their own unique buylist they operate from. In this situation, like in most, knowledge is power.

The best way to win at selling is to know what your cards are worth and what the likely buy price will be. If you sell a lot, you become accustomed to what cards sell for what prices. You also have lots of resources here on Quiet Speculation to assist you in this process.

Step one in my process is to case the room. If you watch detective shows, you know this terminology means to gain knowledge about your surroundings. Walk around the room and see which dealers showed up at the convention. While you’re at it, take a look at their hot list boards and see if any cards you need to sell are listed.

If you are looking to purchase specific cards, you can also use this opportunity to see what each dealer has for sale. This is a good idea even if you aren’t in the market for anything in particular because occasionally you will happen upon a deal too good to pass up.

Once you’ve cased the room, determine who your first dealer will be and sit down with one of their buyers. If you take one thing away from this article, let it be this: it’s okay to say no.

I see a lot of people who are too afraid to say no to a buy price. Buyers have tactics to cajole you into selling to them. Every dealer isn’t out to get you, but you need to determine if the price they’re offering is high enough to accept.

While you cannot look up every card individually, if you are uncertain about a buy price, take a moment while they’re on some other card to look it up and inform yourself. Even if they already piled out your cards, you can always pull cards back out later.

Your approach should differ depending on the value of the cards you're selling. If you only have a few high-end cards to move, take your time and ask every dealer what their buy price is before selling.

Developing a rapport with dealers is helpful so you can negotiate. I know when I'm headed to a GP, I'm going to say hi to all the dealers I'm friends with, and most likely sell to them too. Selling regularly at GP’s will give you some street cred, so to speak, and might earn you a couple better deals than other patrons might receive.

Most dealers have some kind of specialty. Some focus on high-end foils, while others are in the market for Eternal cards. You can usually find that one dealer who will buy cards no matter the condition. Every dealer is different so getting to know them is worthwhile. 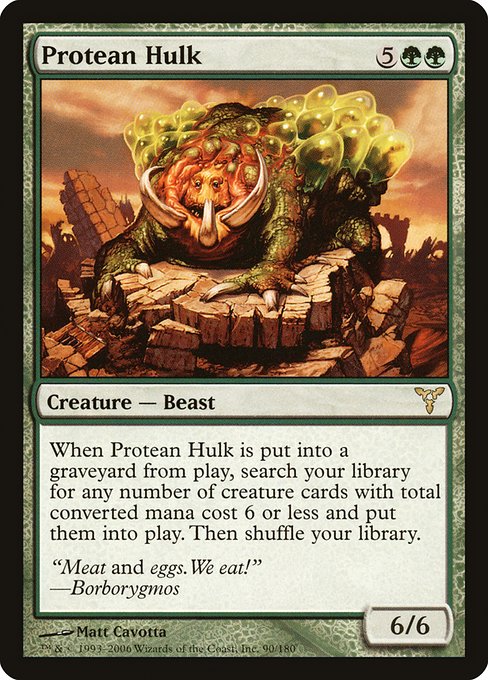 By this point, you surely know that Protean Hulk is a bulk rare no longer. After selling them this weekend, I grew distraught to see them jump up farther. But now they appear to have stabilized in the $6-7 area, and the numbers I got for them seem reasonable in retrospect.

If you’ve been reading here on the site or following me on Twitter, you should have made a bunch of money on this spec like I did. If not, get in on the next one. 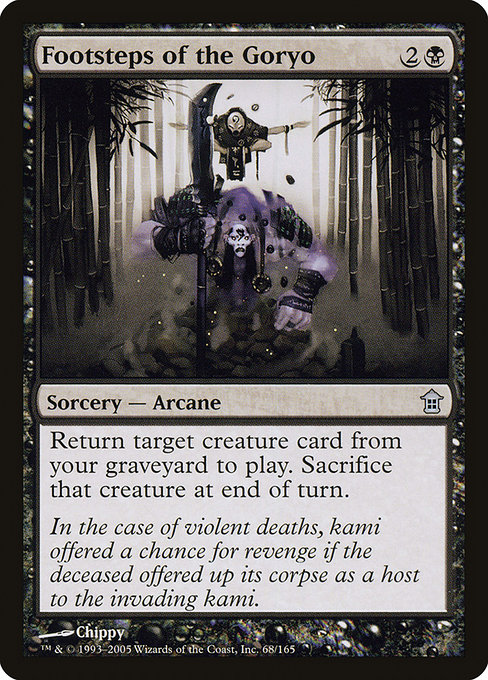 Just like Protean Hulk, this reanimation spell saw an uptick in price due to its play in the same deck. Footsteps has seen only one printing, many years ago. Thus, despite being an uncommon, its ceiling is high.

The current prices of Footsteps of the Goryo and Protean Hulk seem stable under $10 unless the deck really takes off. If that happens, expect another bump in price. 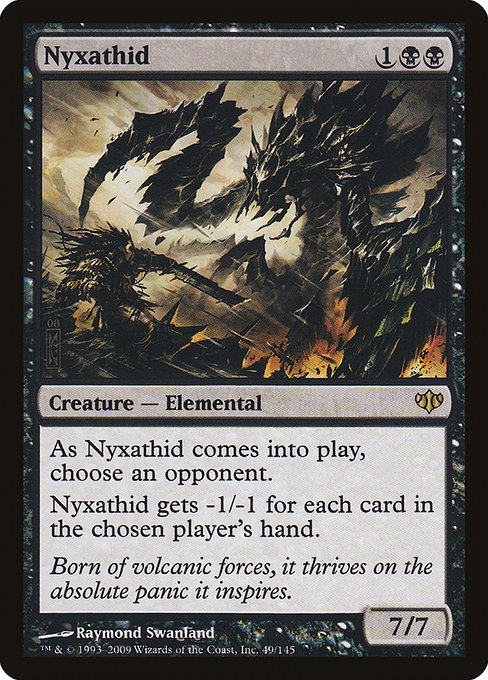 Since the popularity of Tiny Leaders has waned, I thought this spec box card needed to go. I sold my two playsets as well as the couple foils that I had. We have not seen an increase in price on this guy for quite some time, so it was time to reinvest in another target.

The other cards I sold were mostly Tiny Leaders cards like foil Smother, as well as some extra Modern cards I had lying around. One of my recent goals has been to acquire one of each Expedition to make my cube a little prettier. A resource I utilized for that purpose was the other foils of those lands that were previously in the cube.

Foil Khans fetches took a little hit with the printing of the Expeditions, but they’re still good long-term investments. They will be a less expensive way to foil your deck but have it still look sweet.

Speaking of Expeditions, you may have noticed some of them coming out of the pack in less than Near Mint (NM) condition. As this doesn’t happen to every card, it's creating a major price discrepancy. The truly NM copies are rare enough that dealers are charging a premium for them.

There is no consistency though. Some dealers have Slightly Played (SP) or even Moderately Played (MP) Expeditions marked at the same price as the NM ones. Be extra careful ordering these cards online, as sellers are not marking their condition accurately.

What all this means is higher prices overall and paying a premium for the condition you want in the future. Expeditions, especially NM ones, are a great long-term investment. Buying these cards in person so you can judge the condition means it’s okay to pay a little extra.

Well that’s a wrap for my GP Pittsburgh experience. Hopefully you can profit from my experience as well. If you have any questions about GP finance or the event, hit me up in the comments or on Twitter.

Until next time,
Unleash the GP Force!