It's my pleasure to introduce an article series I've been putting together and have wanted to try for quite some time. I present to you all Scrap Savant!

So, here is how this process happened and why I decided I wanted to pursue this series. I'm going to link the original Google Doc I created that was just my thoughts spewed out on the paper.

From there I've asked via Twitter, polled about interest, and even had help with the name of the series. (shout out to Kelly and Nick Packard) The series generated some interest, and I was so excited that I wanted to start as soon as possible. Normally my goal is to have this schedule for the series:

I'm going to stick to that as best I can, this way I have plenty of time to gather information from everyone, since you're all a huge part of this! It also gives me time to build the deck and show drafts of the deck, and see how everyone reacts to it. The final goal is to then play the games on MTGO.

Now, for me this is a learning experience not only in utilizing bulk cards in a creative way and building decks, but also to finally venture on to MTGO. I've never touched the program before, and I felt as someone who creates content I think this is the best platform to deliver recorded sessions of the deck. It also lets me gain knowledge about the program and everything that goes along with it.

I've always had close friends and fellow writers urge me to familiarize myself with MTGO and I'm grateful in the fact they have lent their time in helping me do that. It really helped me with going ahead with this series. So I then discussed the article series and its premise with Kelly Reid and he had this to say:

"Chaz and I have been talking about this Scrap Savant project for a while now.  It's no secret that I love deck building challenges that revolve around restrictions, and I also love using bulk rares as cheap, low risk speculation targets.  As we all know, bulk rares are priced as such because they hold no utility value as game pieces.   When a bulk rare "pops", that is, ceases to be bulk,  that's because someone has discovered a previously-unknown utilization for the card.

Chaz's series is an attempt to define some principles of deck building to help us all understand what makes a good bulk rare.  In my last article on bulk rares, I stress that buying ALL the bulk rares isn't a good way to go;  there are only a handful that have any potential to see play, and of those, only a smaller subset will actually rise to relevance.

This exercise will help us understand how to better identify these hidden gems through the lens of deckbuilding and playtesting."

So, like I have stated the emphasis of this series is building with cards that players would mostly discard, or leave behind during drafts. We're talking the junk and bulkiest of rares and mythics. I'm here to present a way that you can use many of those cards in the same deck.

I think everyone can appreciate not only watching this process develop, but also watch me struggle to win games with these cards on MTGO! Well, who knows, we might get lucky.

When I talk about bulk - i'll give you an example: 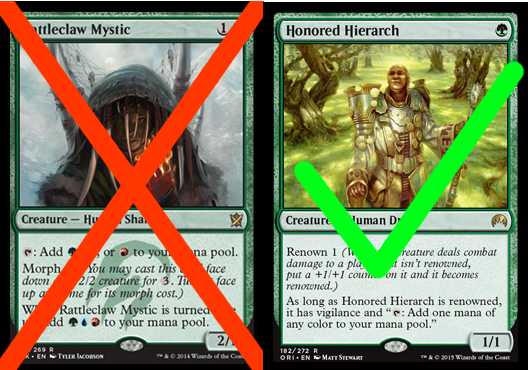 These are the kind of decisions that will be made in this series. Yes, Rattleclaw Mystic is too good for us here on Scrap Savant. We're going to be rolling with the options like Honored Hierarch. So hopefully my wonderful example demonstrates the kind of cards we will be using in these decks. We're looking at those cards you all have stacked high that you just have no idea what to do with. Throw them all together, and try to win on MTGO (and real life). I'm not expecting this to be easy, and unlike other Budget based articles, we don't even have the luxury of using some basic crutches of deck building. So, I'm ecstatic to see how we circumvent these issues.

That leaves us to the first Scrap Savant polling data - the 5 cards that were generated for us was interesting, and laughable to say the least! This is where I turn to the audience; help me help you, by choosing the two rares and/or mythic we will be building around, and which colors we will use. I also have these as "Working Title" until we figure out what we're working with, then we can name the deck.

Choose 2 from this poll: 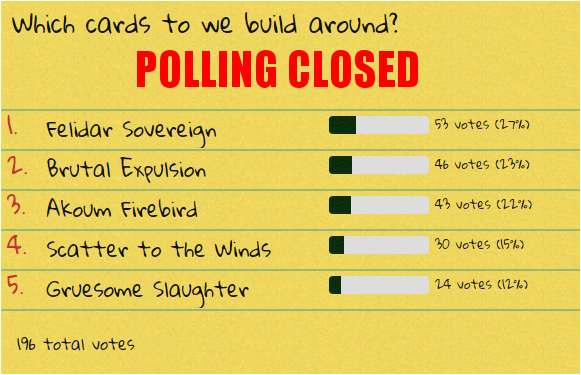 Choose 1 or more from this poll: 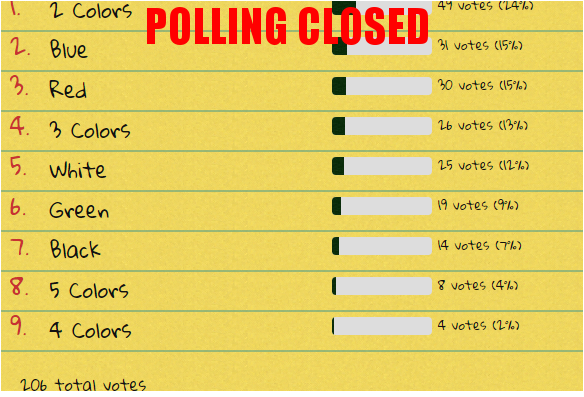 Polling will end in 24 hours. I'm eager to see what the results are. I also can't say again how awesome this is to finally launch this project and article series. I really appreciate everyone's help and suggestions along the way, in addition to everyone's participation. I feel this will be a great experience for all of us, and I'm greatly looking forward to the future of this series. Let's get kick-start this and get those polling results in!

If anyone has any additional questions, comments, or suggestions for this series please feel free to contact me via Twitter or in the comments below.