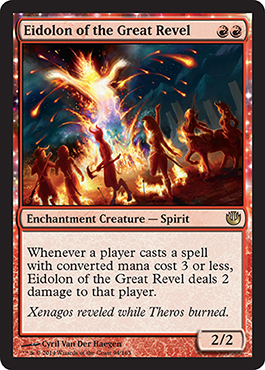 I've been combing through Commander spoilers, but with me not being a casual guy I've really only been looking for Legacy playable cards. I haven't come across any yet, but I'll be sure to do a write-up if I do. The other spoilers have been making the Magic Reddit pretty worthless for my purposes, but after some digging I found a nice little financial tip. We all know that Eidolon of the Great Revel is going to be a Modern staple for the foreseeable future, and with eight copies in the most recent Modern GP Top 8, I did some digging to see how close we are to the card's floor.

The spread is still on the high side, which means that buylist prices aren't phenomenal at the current time, but this is a long term spec. The next thing I checked was comparing the page one listed prices on TCGPlayer versus those on page two. There are a couple copies for $8.50-$9, but as early as page two the listings are at $10. Given the odd nature of Eidolon, a reprint in the near-future seems rather unlikely, and only buying a handful of copies would increase the market price by a full dollar.

It would take a lot more movement for the price to explode from this point, but those $9 copies won't be around for long.

2 thoughts on “Stock Watch- Eidolon of the Great Revel”