Investing in full sets is a strict prerequisite to short-selling cards on MTGO. Thus far the idea has always been to speculate with full sets during their most marked growth phase---between May and October for regular sets and between August and March for core sets. Short-selling was a secondary option to take advantage of individual card fluctuations.

As I mentioned in my first article about short selling, investing in full sets leaves you holding a big stack of different cards with little to do but wait. If you're unwilling to short-sell your own cards but are looking for extra tix, other possibilities might be available, provided you're willing to let others do the job for you.

In this last installment of the Short Selling miniseries, I'd like to develop potential speculative and business alternatives for full set investment that goes beyond short-selling your own cards.

Offering Cards to Others for Short Sale

In the financial market world, short-selling naturally involves borrowing a security or an asset from someone else or from a brokerage firm. In the past four articles I wrote on this topic, borrowing was basically an untouched subject. As for my own activity, only the few short sale moves made in the context of the "100 Tix, 1 Year" project involved that dimension.

The fee I charged was the following: 2% of the cards' value at the time of borrowing, repeated each week until the cards were returned. Under this scheme, borrowing 20 tix worth of cards for 10 days would cost a total 0.8 tix. If the borrowed cards lost 30% of their value in the same period of time, this is a win-win situation for the lender and the borrower.

Could lending cards for short sellers be a profitable source of tix? 2% may not seem like much but it can add up quickly. Lending 60 tix worth of KTK cards (more or less the value of the top 10 cards from that set) every other week for six months would yield about 15 tix---an additional profit of 23% on my KTK full set specs without doing or risking anything, ideally.

At this point this is, at best, a nice theory. Lending cards to other speculators carries significant risk, namely that they don't return your cards at all. Unless you lend your cards to very trusted speculators or friends, you probably want to implement some sort of deposit or guaranty. Perhaps a 2% fee is not enough, or too high. Or there might be additional fees you want to apply.

Assuming all the details are worked out, borrowing cards to short-sell, or lending cards to speculators for a fee, both represent an interesting speculative option that may satisfy two categories of speculators at once. Nowadays, in the heat of the Standard season (from October to March), Top Standard decks are worth between 200 and 400 tix. With the fee system mentioned above (tweaked one way or another) a player could play a different Tier 1 Standard deck every week for about 6 tix per week.

I'm not a player at all so my reasoning may be flawed, but renting cards in these conditions seems like an option many MTGO players and grinders would greatly appreciate.

For players who already own a part of their decks, we might be talking about merely 2 or 3 tix per week. Needless to say, such an option may be very economical for trying out new decks before committing to buy the cards.

As a point of comparison, assuming prices remain flat, buying and selling a Standard card within a few days would probably cost somewhere around 8%--the typical spread. And in a renting system renters don't need to worry about price fluctuations.

Quite a few things need to be considered before moving into an MTGO renting business. That being said, SpareDeck ventured into the rental business for paper Magic a few months ago. I haven't looked in detail at their methods, prices or overall success up until this point. But if this model works out for paper Magic it should be incredibly more efficient and successful on MTGO.

On MTGO, card conditions don't matter, you have an instant pool of worldwide customers, shipping is free, and transactions take about 30 seconds. In summary, MTGO seems like the more logical place to start such a business.

Seems like the perfect business, right? Well, there's one more snafu. Right now, lending cards is entirely predicated on buying or investing in full sets. This investment was supposed to take place between May and October when demand for Standard is at its lowest. Past November there's little incentive to conserve full sets and most full set speculators are selling at this point.

Even with the new rotation structure, full set speculation will always be based on buying when demand and prices are low and selling later when prices are high. In the best-case scenario speculators hold full sets for half the year---not exactly compatible with a serious and dedicated rental business that should have cards available for most, if not all, of their Standard life.

On the other hand, buying full sets at the time of release isn't very appealing. Prices on MTGO typically start high and then lose value over many months.

Nonetheless, in the grand scheme of things, investing in full sets early on with the intention of generating tix primarily through short sales or rentals may be more viable than it seems. As it turns out, if you consider a set's value over the entire period it's available for redemption, price variations are not so dramatic. Let's take a closer look at this.

Investing in full sets to take advantage of the seasonal upward trend only make sense over a period of about four to six months. Buying earlier would result in missing the best buy price, and selling later means missing the peak prices. In both cases, you also tie up capital longer for no additional profit.

What would it look like to invest in a full set this way, acquiring early and holding on for a long period of time? Are the losses unmanageable? And could such a long-term investment make short-selling and renting cards all year long viable?

Prices of any set are at their height at the time of release and then rapidly drop. One month after release it's not uncommon to see a set-wide reduction of 50%. Depending on the set, there will be an additional 20% to 40% lost between this time and the absolute floor. Prices then move up, reach another local maximum during the following Winter, and start their inevitable decline through to rotation.

Since redemption still supports prices for one more year, at this point prices begin to creep up slowly for another year or so. They finally collapse and hit an absolute floor when redemption stops.

Let's posit one month after release as a reasonable compromise between the competing goals of getting in early and securing cheaper buy prices. Innistrad (ISD) and Return to Ravnica (RTR) blocks have already undergone the full cycle from Standard playability to the end of redemption. Looking at the evolution of these sets' prices from a month after release to the highest price post-rotation, we see an average variation of +1%.

Numbers for ISD and RTR blocks should be considered with caution since redemption fees were much cheaper before Gatecrash ($5 instead of $25).

Dragon's Maze (DGM) suffered from this problem, in addition to being a weak set with only one "real" card in Voice of Resurgence. A DGM set was about 50% less valuable at its post-rotation height compared to one month after release. On the other hand, ISD and Avacyn Restored gained more than 20% after rotating out of Standard!

Here is the RTR graph, a typical example of that time. RTR was about 12% less valuable at its post-rotation height compared to one month after release.

All in all, buying a full set in today's climate about a month after release and selling it right before redemption ends would probably lose you somewhere between 10% to 30% on average. A loss is a loss, but it may be offset by other profits if the intent is to short-sell or rent cards during those two to three years.

I have to admit, buying a set about a month after its release in order to short-sell the cards sounds like nonsense since prices are obviously going down.

If you intend to lend out cards then buying early is probably preferred. Sure, speculators could simply rent your cards to short-sell since prices are inevitably going down. But now that you're applying fees (2% or more), any short-sellers willing to borrow your cards and wait months for prices to bottom would generate you extra cash in the process. Finding the proper fees to apply is key here.

Buying a full set early enough would also allow short sales on rares that spike in the early weeks of a set. Constrained supplies on new Standard mainstays can have this effect, and the cards will surely crash afterwards. Hero's Downfall, Mastery of the Unseen and Outpost Siege are such examples.

Purchasing full sets before they bottom to hold for several years offers a greater possibility of short-selling outside of the few months discussed in previous articles. Anafenza, the Foremost from KTK spiked hard in January of this year. At that time it could have been a very profitable short sale as the card was not heavily played in Standard and KTK was the primary draft set.

An effective rental business would need to be able to rent any Standard-legal card at any time of the year, including very soon after a new set release. You'll probably need to buy sets as early as one month after release. To recoup the largest share of value from these purchases you would then sell them near the end of the redemption period. As seen above, this configuration results in little loss, if any. 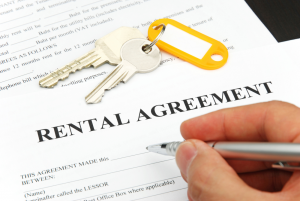 Players would be interested in significantly more cards than short-sellers. Even with rental fees as low as 2% or 3% per week it would take very little to make your full set investment profitable.

With Khans of Tarkir, for instance, at a 2% per-week fee you would need to rent roughly two thirds of the set's value for about 30 weeks total to break even.

This seems very doable to me. 2% is probably the lower end for fees, and you'll have a window of 45 weeks per year to rent cards, at least during their Standard life.

I don't know if we'll see an MTGO rental business any time soon, but I think the idea is definitely worth considering.

Investing in full sets definitely offers a lot more possibilities than just sitting on a bunch of cards and waiting for them to increase in value. Short-selling appeared to be a cool addition to the speculator's arsenal. Developing a card renting business could be a challenging, but viable, extension of full set investment as well.