Here we are in November with the last regular report of the "100 Tix, 1 Year" project. In December's report I'll conclude with some general thoughts on the project as a whole, and likely follow that up with a few other articles to dig deeper in the data we've accumulated this year.

Thank you for following the adventure this far. After eleven months I'm glad to report the account is still progressing. November finally broke the sluggish trend we saw in September and October.

Today, let's review what happened this past month and discuss what December might look like as I close the project out.

More information about the "1 Year, 100 Tix" project can be found here:

November by the Numbers

November saw a bump of 18% in the bankroll, due to several factors. These included a stabilization of Standard prices, a clear rise in almost all the Modern positions and few profitable short-term flips. 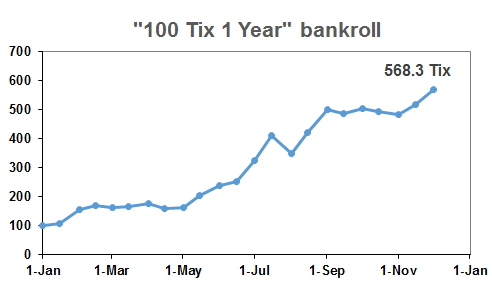 There was a lot of movement in November. I bought and sold many short-term specs over this period, which don't appear in the head shot of the account from November 31st.

What you can see is I've been selling some of the specs I was holding for a while. If you follow me on Twitter you know I didn't make any tix on these latter specs. November was the month I started selling positions I had no hope of realizing a good profit on. Whether they were losers or slight winners, it was time to get some tix back for the end of the project.

At this point in time, all my decisions are being made with the deadline of December 31st in mind, so they may diverge from what I'd recommend for other investors.

In the losers category, I notably sold Dragon Whisperer, Yavimaya Coast, Ghastly Conscription and Ojutai's Command. I estimated I could not get anything more out of these positions in the remaining weeks and decided to cut my losses.

Fortunately, I also sold some positions in November with a decent profit, such as Warden of the First Tree, Starfield of Nyx, Obstinate Baloth and Night's Whisper.

Modern and Pauper were strong in November. With my intention to focus only on the very short term, I made some profitable flips over just a couple of days. Positions in this category included Olivia Voldaren, Woodland Cemetery, Mental Note, Detention Sphere, Tectonic Break and Slippery Bogle.

I also added a few Modern positions with the expectation of generating extra tix over the next few weeks. Modern prices are really pushing hard at the end of 2015, and I'll try to wait as long as possible to get the most out of the account's Modern specs.

Wrapping Up the Project In the three weeks that I have left, everything on the account has to be converted to tix and tix only.

In terms of performance, December is very likely to be flat, slightly up at best. There's little wiggle room for my remaining positions. Standard positions should see little movement, if any. The one way I might add a few tix before Christmas is by riding the upward trend of Modern.

Overall, I expect to close the project with a final bankroll slightly under the 600 tix bar. I would be very satisfied with that number and will only regret the poor performance of my Magic Origins (ORI) positions. Outside of this project I'm holding onto all of my ORI specs---there are still several months to go with ORI in Standard to see a change in trend, especially once KTK and FRF rotate.

As I'm writing these lines I have about 7 tix spread among all of the MtgoLibrary bots I used. I will surely do my best the scrap any fractional credits and maybe salvage 3 to 4 tix. I have another 2 tix or so on other bot chains, including GoatBots, MtgoTraders, Clanteam and DojoTrade.

In the concluding article in January we'll also announce the winner of the one-year contest, so stay tuned!

Finally, it's always interesting to look back at the data accumulated during a project like this one. What went right? What went wrong? How much did we make on which specs, and why were some more profitable than others?

Analyzing what happened during these twelve months is sure to be of value to speculators, including myself, as we work to refine strategies for the following year. I'll try to put together a couple articles on that topic later in January or February.

Thank you for reading and following,