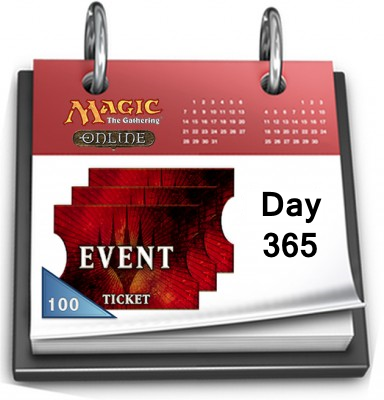 The “100 Tix, 1 Year” project has come to an end. After a year of sharing MTGO specs with readers, Sylvain reviews the project and evaluates the final result in this concluding article.

Breaking the slump from September and October, November has been much more productive for the “100 Tix, 1 Year” bankroll. Sylvain discusses how he aims to conclude the adventure.

Today Sylvain discusses short sales in the context of the quick flip. He explains the situations that lend themselves to such a move and the time frame involved.

October went worse than expected, due to a poor performance by the ORI painlands. Read on for Sylvain’s latest report on the “1 Year, 100 Tix” project!

This month Modern made some room for Origins in Sylvain’s “1 Year, 100 Tix” portfolio. With only three months remaining, he discusses his plan to exit ORI positions profitably.

Eight months have passed and Sylvain’s 1 Year, 100 Tix account has reached the symbolic value of 500 Tix. Read on for his report on the recent gains in the account and his plan for the remaining MM2 positions.

The July report for Sylvain’s 1 Year, 100 Tix project is here. Despite a fairly low activity this month, the value of the account still went up. In this article, Sylvain shares a piece of advise on ORI opportunities along with his five favorite targets.

Halfway through his 100 Tix 1 Year project, Sylvain presents a summary of the first six months, during which the account tripled. See for yourself and congratulate the winner of the six-month guess.

The May report for Sylvain’s 100 Tix 1 Year project is here. Modern propelled the account over 200 Tix this month and is a format every speculator on MTGO should pay attention to. See what Sylvain has to say about it.

The April report for Sylvain’s 100 Tix 1 Year project is here. This month the account lost ground compared. Sylvain draws two lessons from the flop and his specs on DTK packs.

March’s report of Sylvain’s 100 Tix 1 Year project is here. The value of the account is still progressing up and the next few months promises to be loaded with opportunities. Sylvain also offers some more insight into how he views Quickflips.

In this report, Sylvain gives us an update on his 100 Tix 1 Year project and talks about how he choose his targets.

Sylvain delivers the first report of his “100 Tix 1 Year” investment project. First transactions, winners, losers, overall performance and credits to bots–read how things went for this rather prolific first month.