Welcome back to the October report of the “100 Tix, 1 Year” project. There are just two months left to go.

Despite high hopes, October was the second month to post losses during the course of the project. It wasn't disastrous, but it was certainly a step in the wrong direction.

This month, the unlocked article from my "Nine Months of Portfolio Management" series is Part 10 – Conclusion. This article summarizes the lessons learned from these nine months of speculation on MTGO, the "to-do's" and "not-to-do's." I also discussed some important take-home messages that, in my opinion, are still very valid.

Today I'll comment on the lackluster month of October and discuss why, after everything, a significant amount of profit can still be made before the end of the project.

More information about the 1 Year, 100 Tix project can be found here:

October by the Numbers

Here's a graph of the account's value since the beginning of the project in January. 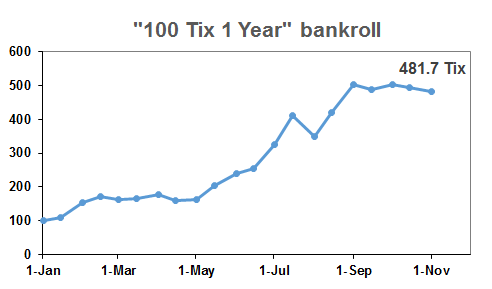 The situation here is similar to the February-April period. Hopefully November and December will be just as good as May and June.

As I'll detail below, this little dip is attributed to the performance of a few select positions, while the rest of my specs are faring okay. This is not an excuse for the disappointing results of October, but simply to highlight that not everything this past month was doom and gloom.

Here's a snapshot of the account as of October 31st. Not much has changed since last September. I was counting on decent growth from my Standard positions, specifically those from Magic Origins (ORI). I only added a few positions in October, including Haven of the Spirit Dragon, Kolaghan, the Storm's Fury and Obstinate Baloth.

In order to make room for incoming Modern and Innistrad opportunities, this past month I sold Sunscape Familiar, Pillar of the Paruns, Monastery Mentor and Ghostfire Blade. On average these netted a decent but less than extraordinary profit.

In the wake of Pro Tour Battle for Zendikar (BFZ), prices went all over the place. I may have missed some selling opportunities, but these swingy price fluctuations are more the result of speculative activity than a true reflection of the cards' value.

Thankfully, many positions have stabilized as I'm writing this. Several are already heading back up, this time with a much more organic and sustainable growth.

On the other hand, the positions I placed the most hope in, the ORI painlands, have provided nothing but disappointment. Nothing leads me to believe they'll improve significantly before the end of this adventure.

Looking at the October results from a different angle reveals that not everything went bad. Instead, I could almost argue that everything is in pretty good shape except for a few positions--positions which, however, weigh heavily on my bankroll.

Blame It on the Painlands!

Since I was so confident about them, I invested more Tix in ORI painlands compared to other positions. All combined, the five painlands represented about 20% of my bankroll at the time of purchase.

At the end of October, they held 90% of their prior value, totaling a loss of ~42 Tix for the account.

In other words, the rest of the account is actually up by 20 Tix. This isn't anything to brag about, but it means the fundamental logic behind the rest of my specs was sound.

It's worth considering why the painlands are underperforming. In the Standard meta, they've been pushed almost entirely to the sidelines by the BFZ tango lands.

The latter combine extremely well with basics and the KTK fetchlands. Current Standard decks are either four colors with 8-10 fetchlands plus 6-8 tango lands, or in two-color allied pairs. Neither are interested in enemy painlands.

Is this the end of the painland spec? No, but we may have to wait until KTK rotates out of Standard in April to see them take off.

Unfortunately, this will be way too late for the "100 Tix, 1 Year" project. Consequently I may be outing them before the end of the project, but if you've invested in painlands my advice is to hold them until next Spring.

A Matter of Timing, as Always

Did I miss the opportunity to sell Liliana, Heretical Healer or Warden of the First Tree during PT BFZ? Should have I sold Siege Rhino before the PT when it was at 2.5 Tix? Maybe, maybe not.

Pro Tours are always crazy times for prices. One appearance on camera and prices shoot through the roof; one Top 8 missed and prices plunge. It's easy to say selling into the PT hype was the best move, especially weeks later when you've already seen prices come down. Predicting the outcome in the thick of things is trickier.

Ultimately, my decision not to sell wasn't as bad as it may appear in this October report. At the time I evaluated the account, many prices were bottoming. A few days later as I'm writing this report, Liliana and Warden are already back up, getting closer every day to their prices during the last Pro Tour.

Now that the ripple effect of the Pro Tour is coming to an end and supplies of KTK, FRF, DTK and ORI are drying up, these sets have room for sustainable growth. This should hopefully leave me enough time to sell most of my Standard specs at a reasonable profit.

Now that we're clear of new set releases for the next four months, Standard and Modern prices should go up. Concerning this project specifically, things have to happen before January 1st, 2016, in less than two months.

Fortunately prices have already rebounded and are higher than just a week and a half ago. Warden of the First Tree, Liliana, Heretical Healer, a bunch of my MM2 positions, and my newly acquired Innistrad positions are all currently up.

Time is running out for the "1 Year, 100 Tix" project. In the months that remain, I'll try to take advantage of small profits on any position and look for interesting quick flips before the gong rings.