Below are the total set prices for all redeemable sets on MTGO. All prices are current as of December 29th, 2015. The TCG Low and TCG Mid prices are the sum of each set’s individual card prices on TCG Player, either the low price or the mid price respectively.

In today’s report we take a look back at the 2015 year of the MTGO Market Report and perform an analysis of the buy and sell recommendations.

Each closed call (i.e. a card that was bought and sold) can be evaluated and judged a success or failure by looking at percentage gains or losses. We’ll also construct a mock portfolio to estimate what the net gains or losses could be for a speculator following the recommendations. Lastly, we’ll make comments on any outstanding buy calls and discuss their future.

For every recommendation, the buy price we used is the price as recorded by MTGGoldfish.com on the day of the recommendation. The bias here is that it’s possible to buy cards at a lower price than the listed price. MTGGoldfish uses MTGO Traders prices which are frequently not the cheapest (they focus on stocking every card, not the lowest price). Also, acting on the recommendation on a different day might yield different results as prices might have fluctuated in the interim period.

Again, the exact price which a given speculator gets will probably not correspond perfectly to the sell price either. The purpose is to illustrate what is possible, given a reasonable set of assumptions and the actual buy and sell recommendations given in the report.

Prices used for recommendations still open are current as of Thursday, the 25th of June. The same 80% and 90% price adjustments have been taken into consideration for cards less than 2 tix and cards greater than 2 tix, respectively.

A mock portfolio based on these recommendations was built in order to put the recommendations into a different, more tangible context. The rules of this simulated portfolio are as follows. A maximum of 50 tix was dedicated to each recommendation, and an upper limit on the number of copies was set to 40. Based on our experience, buying or selling up to 40 copies of a given card, without significantly affecting prices, is possible if a number of different bot chains are used.

We also took into account the fact that tix generated by selling positions can be re-invested into new positions. Basically this adds the dimension of compound interest to our mock portfolio.

The table below presents the percentage change in each recommendation as per the above assumptions.

* Indicates the maximum buying price we recommended for this card, although the price on MTGGoldfish was higher on the day we recommended the position.

Now let’s take a look at our mock portfolio:

With the profit of 144 closed positions that would have been re-invested (as any speculator would proceed with his/her own portfolio) it would not make sense to compare the total buying price of all the positions to the total selling price to estimate the overall profit generated. 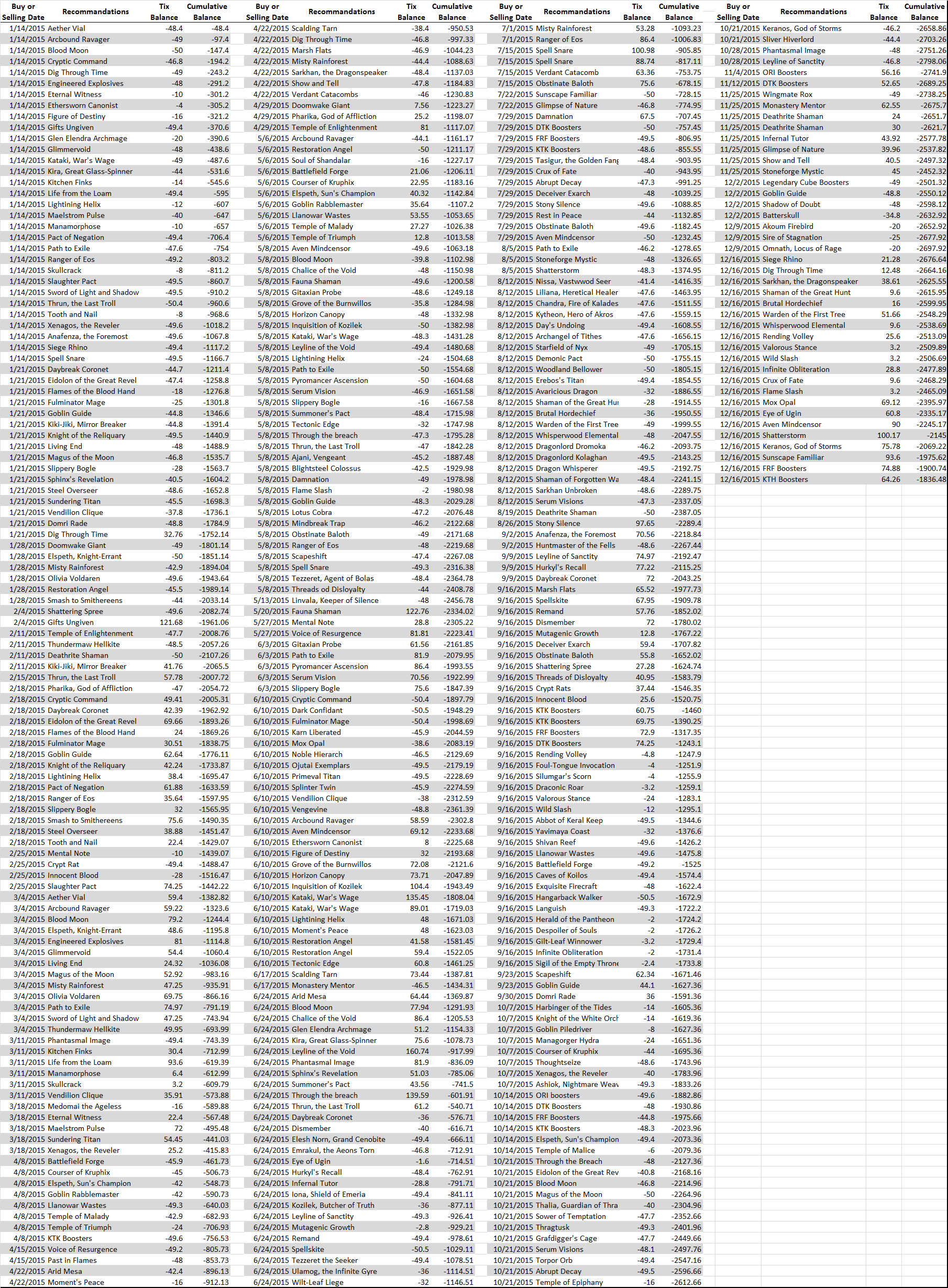 Cards from Magic Origins and Dragons of Tarkir have the benefit of the first spring Standard rotation. With Khans of Tarkir gone, there will be lots of room in Standard for new strategies to push card valuations around. Holding cards from these sets is correct at this time.

After Shadows over Innistrad is released, the utility of all cards should be reevaluated and updated as the Standard metagame develops in April. There will be a couple of months of exploration, and then the small summer set will shake things up again. However, speculators should not be afraid to dump their cards from these sets if they aren't showing increased uptake in Standard.

Prices head lower into the summer as the weather improves, and any card that isn't seeing play in Standard will plumb new lows as the calendar ticks over into June and July. Don't be afraid to jettison failed specs in May. Holding losing positions into the summer is a recipe for further pain as prices inevitably head lower. There's always a few cards that buck this trend, but speculators are rewarded for being mostly correct and sticking with the broad trends.

Elsewhere, Khans of Tarkir and Fate Reforged are set to exit Standard in about three months. With Oath of the Gatewatch release events to come by the end of January, there's very little time to sell specs from these sets.

Cards like Siege Rhino won't dip very much in the near term, but the potential of a home run spec on this card is next to nil at this point. Selling cards from these two sets before the new set hits would be a good idea, to generate liquidity and to reconfigure your portfolio.

Modern speculators should be busy during the following weeks. This is a turning point and a selling time for many Modern positions. Modern Masters 2015 positions are still showing strength and speculators may want to ride the trend as long as possible, probably until Pro Tour Oath of the Gatewatch.

While holding positions until this Pro Tour might also be a good strategy for other Modern positions, we advise once more to take good profits whenever the opportunity presents itself. For instance, Magus of the Moon has peaked above 30 tix recently, matching its previous top reached last July and from a 12-tix low earlier this past September.

On the buying side, the Modern flashback series should get speculators' attention in 2016. Every set has its lot of Modern staples and there will be buying opportunities in Modern almost every week this year, starting with Ensnaring Bridge from 8th Edition (8ED) this week.

Blood Moon from 8ED could also be considered a pick-up, but with a few caveats. In less than three months, 9th Edition drafts will become available and another round of Blood Moons will hit the market. In addition, any potential banning of components from Amulet Bloom (to be announced in about two weeks) could make Blood Moon less desirable. The timing for profit from this spec is thus shorter and riskier.

Special attention should be paid to cards from Theros block and Magic 2015, particularly junk mythic rares like Medomai the Ageless. This card is currently priced at about half of its price at the time it was recommended. There is no further downside at this price, so speculators are encouraged to continue to hold.

The sell window for mythic rares from these sets is July to September. Speculators should be sure to exit their positions in these cards at that time. Typically prices head down during October as the new fall set is released, and then November is the redemption cut off date. After November, junk mythic rares will have zero value on MTGO.

Modern staples from these sets, like Thoughtseize and Eidolon of the Great Revel, will fluctuate alongside interest in Modern Constructed. There's no need to keep a selling window in mind for these cards. However, September is usually a near-term peak for Modern prices, so keep that in mind if you're wondering whether or not to sell at that time.

The Power Nine Challenge delivered what a lot of people in the online Vintage community had been hoping for since the release of the P9 pieces on MTGO---a large Vintage tournament able to attract close to a hundred people every month. There's no reason to believe the average attendance of the first three P9 Challenges won't be repeated. Therefore P9 pieces and other Vintage prices should find a support here.

As we mentioned before, this doesn't make Vintage speculation more attractive but it gives more stability and a better outlook to Vintage prices, at least from a player perspective.

Our only Legacy bet at this point resides in Legendary Cube Prize Packs (PZ1). Since we recommended buying them they have already progressed by about 30%. Without further Cube drafts awarding these packs as prizes, the value of PZ1 is expected to keep creeping up slowly, as is the value of Commander 2015 cards included in the special set.

Pauper leagues have tremendously boosted the popularity and prices of the format. Most Pauper staples broke their record high in the past few weeks and don't seem to have reached a limit yet. Mental Note, for instance, is now cruising way above 3 tix, while decks using it are not even among the most popular in the format.

Our recommendation for Pauper speculators is to ride trends as long as possible, without forgetting to cash out and secure profit along the road.

If the popularity of Pauper sustains, as it seems it will, WotC might decide to offer flashbacks drafts of older formats like Mercadian Masques and Odyssey. These blocks contain some of the most valuable Pauper staples. As commons, Pauper staples would likely see their price significantly tank in response.