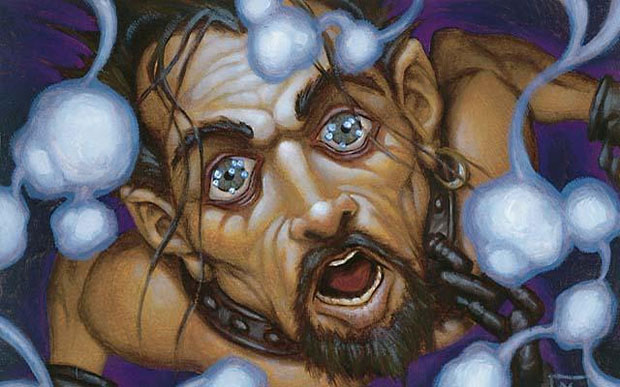 Eternal Masters is a set that threatens to shake up card prices significantly. In fact, the two known cards from the set have already seen movement, and cards on the Reserved List have seen movement as a chain reaction relative to the set's announcement. While the set will shake up paper Magic significantly, there will also be some unique impact on Magic Online. Specifically, there are a lot of more expensive Pauper staples that wouldn't otherwise be reprinted that would tank immediately if they showed up in EMA. Daze strikes me as a prime EMA candidate, and with it being over twenty tickets a reprinting at any rarity would cause its value to plummet. I've already sold my set, and I advise others do the same.

There are a handful of other Pauper cards that have been under-printed, either because of the way Masques block was released on Magic Online or due to only being released in Masters Edition. Cards like Oubliette, which has been slowly creeping up, and Cuombajj Witches come to mind.

Cuombajj Withces has been falling in value, which indicates that players are selling. This could be due to a decrease in Gray Merchant of Asphodel decks, though personally I know I sold my set due to fear of a reprinting.

Some other cards that I'll be selling off before we have a full spoiler are Hydroblast and Pyroblast. These cards stand to plummet to fractions of a ticket with a reprint. If any or all of these cards end up not being reprinted in EMA, then I expect them to all be great positions to hold in the era of Pauper leagues, and what will be a long window before any realistic reprintings.