Below are the total set prices for all redeemable sets on MTGO. All prices are current as of February 29th, 2016. The TCG Low and TCG Mid prices are the sum of each set’s individual card prices on TCG Player, either the low price or the mid price respectively.

This week, Saviors of Kamigawa gets added to the mix so it will be the complete Kamigawa block draft format for flashback fiends. If you've been waiting to buy your play set of Through the Breach or Goryo's Vengeance, this would be the week to pull the trigger.

All of the redeemable Modern sets rebounded in price this week as speculators and bots tried to take advantage of recent price declines to stock up on Modern staples that have fallen on hard times. Check out the Trade of the Week section for an in depth breakdown on Keranos, God of Storms from Journey into Nyx.

This weekend will feature three GP Modern events, so we should get a look at the final iteration of the Eldrazi freight train before one or more key cards of the deck is banned in April. If you are holding Eye of Ugin (as I am in the Market Report Portfolio), this will be a good weekend to sell.

All sets in Standard took a hit this week. It's very unusual for a small set like Oath of the Gatewatch (OGW) to rise in price while it's being drafted, so it's no surprise that gravity intervened this week to bring the set price back below triple digits. Sealed leagues will also be a catalyst for lower prices over the next month.

The two other big drops were in the sets that will rotate out of Standard in April, Khans of Tarkir (KTK) and Fate Reforged (FRF). Both of these sets are starting to look like good value relative to their paper counterparts.

In particular, Shaman of the Great Hunt out of FRF went below the sale price of 0.01 tix on Goatbots. This price is unheard of for a mythic rare from a redeemable set, so I am paying close attention to the price of FRF mythic rares at the moment as the set looks to have long-term value at current prices. Small sets have a large hurdle to see demand from redeemers due to the flat redemption fee taking a chunk out of the value of fewer cards, but FRF could be the set that bucks this trend.

KTK is also a riddle. Of course it will have long-term value due to the fetchlands. But since this cycle of rare lands is so essential to Legacy and Modern play, the value will tend to accrue in the lands themselves and not in the mythic rares of the set. If a mythic rare got below 0.2 tix, it would be a good long-term bet, but my normal price limit of 0.4 tix on a mythic rare is too high.

BFZ boosters are moving up this week in anticipation of the introduction of Sealed leagues. Initially these leagues will be only for Battle for Zendikar block and play will be structured the same as constructed leagues. Start a new league run, play five matches at your leisure, and then collect your prizes.

The last time sealed deck leagues were available on MTGO was before the introduction of Version 3 of the client, released in 2008. Back in the day, you could add a booster to your league deck every week, giving you a chance to upgrade your deck or try out different builds entirely.

Sealed leagues are great for the exact same reason as constructed leagues. You don't have to commit 2+ hours to playing MTGO, which is required for a draft. This reintroduction of a way to access Limited play on MTGO will bring back an under-served demographic in the MTGO economy and result in a step-wise increase in demand for BFZ and OGW boosters.

As long as there's a discount to buying boosters for league entry on the secondary market relative to the store, there will be demand pushing up the prices on these boosters. Look for BFZ boosters to head closer to 4 tix over the next two weeks. I give it a 90% chance that BFZ boosters will be 4 tix within three weeks.

FRF and KTK boosters are the other candidates for speculators, as they sit at 2.0 tix and 3.3 tix respectively. Both are up nicely in the last month since OGW release events ended. There is room for further gains on these, but speculators should not hold onto these past the middle of the month in order to get out ahead of these sets rotating out of Standard.

On the MTGO tumblr, Lee Sharpe answered whether or not FRF would still be used in draft after it rotates out of Standard. It turns out they will be offering triple DTK drafts instead of DTK-DTK-FRF drafts. This is important as the values of both KTK and FRF boosters will plummet once you can no longer draft with them.

As usual, the portfolio is available at this link. Like other MTGO speculators in the Quiet Speculation community, I was paying close attention to Keranos, God of Storms in recent months. After rotating out of Standard, this card more than doubled in price due to being a key card in Splinter Twin main decks and sideboards. After the banning of that card in January, Keranos had fallen back to below its pre-rotation price.

This type of rapid rise and fall in a card's price, especially of this magnitude, is unusual; but it has roots in a few factors. First, the card was an essential part of a top Modern deck and interest in Modern has been ramping up, peaking with the introduction of Modern leagues and Pro Tour Oath of the Gatewatch. Second, the card itself is a mythic rare from a small third set, which is often a recipe for low supply.

These two factors laid the foundation for the price swings we've seen, but the swings themselves occur due to the nature of the economy on MTGO. The MTGO market is very competitive and bot margins as a result are often as low as 10%, if not lower. Unlike your local game store, which basically has a monopoly to sell Magic in a small area, bots are always in competition with each on MTGO and they are forced to eke out their profit from these low margins.

One of the adaptations the bots have implemented in the last two years is adaptive pricing. If they start selling a lot of a particular card, they will start raising the price. There's a similar effect on the way down, though prices are quite a bit stickier on the way down as they tend to fiddle with buy prices first before they start reducing their sell price.

The end result is that prices on a given card tend to overshoot on the upside and on the downside. 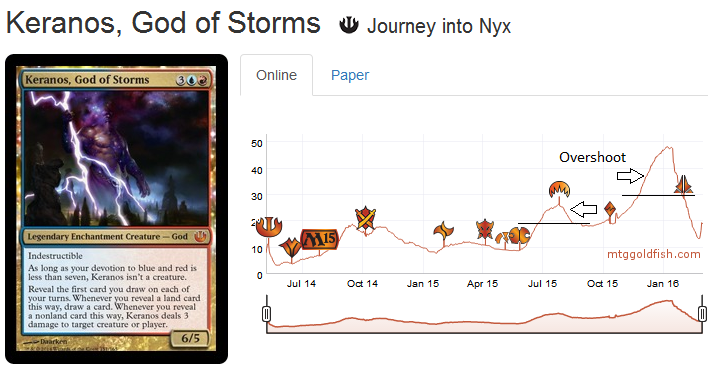 Taking a look at the price history on Keranos, we can see two times when the price recently overshot to the upside.

After Modern Masters 2 was released, the price vaulted from about 10 tix to 25 tix by the time Magic Origins was released. By the time Theros block rotated out of Standard, it had sunk back down to about 18 tix. Although the long-run value and price of any individual card is hard to pin down, it had basically overshot its price by about 7 tix in this case.

After BFZ was released, the blue-red god started the next process of overshooting, peaking close to 50 tix just prior to the banning of Splinter Twin. Since then, the card has plummeted back into the teens. Now we are witnessing an overshoot to the downside. The card has fallen too far relative to its long-run value. Right now, we are witnessing the rebound and it's no big surprise that it's sitting around 18 tix again.

Although I wasn't able to buy at the absolute bottom of around 13 tix, a price below 18 tix seemed like a very good long-term bet to me. The eventual banning of one or more key components in the Modern Eldrazi decks will open space for slower strategies, and Keranos has proven to be a key card for control decks.

I'll be paying attention to this card over the next month. If it starts drifting down back below 15 tix, it will be time to start buying again.