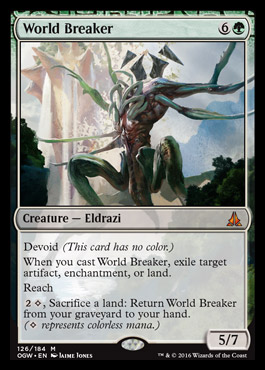 With as diverse a Top 8 as PT Shadows Over Innistrad had, you don't end up seeing too much immediate market movement outside of the hype spikes that we saw when cards like Seasons Past and Cryptolith Rite hit the camera. In the wake of the actual PT results, prices haven't moved a ton. I assume this will change as more tournament results come in and the format moves towards fewer successful decks. For now, a card that I'm keeping my eye on is World Breaker.

During the PT weekend I was watching card prices closely to make sales at inflated prices due to hype, and this was one that didn't really budge despite being featured in Goggles Ramp- one of the more successful decks from the event and even one that earned a Top 8 berth in the hands of Brad Nelson. During Saturday play World Breaker moved all the way down to having a 7% spread, though Sunday and Monday the spread had gone back up to 20%+. Looking at the spread now though, we're back at sub-20%.

Should Goggle Ramp- or really any Ramp deck- continue to see success in Standard then it will definitely be featuring World Breaker and World Breaker will almost assuredly increase in price. Buylist prices are so close to retail as it is, and it won't take much to see these prices inflate. World Breaker also has legs in Modern Tron, though this is much less exciting than the Standard potential of the card.

With a previous high that was over $10, I fully expect to see growth in World Breaker either immediately in Standard or at some point later during its legality- which will survive one more rotation.