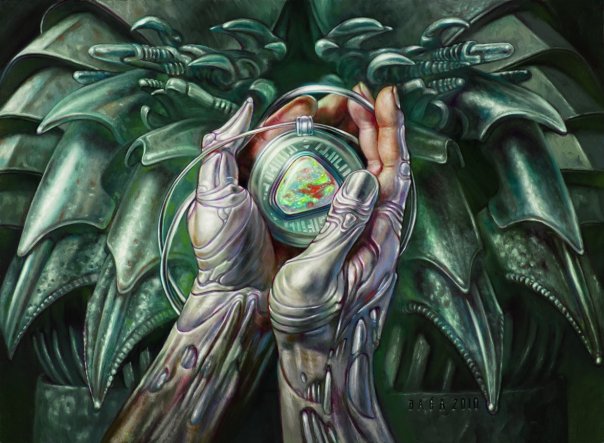 At Grand Prix Columbus I talked with a collector who literally blew my mind and changed my world when it comes to Magic collectibles. The two of us were having a conversation about old cards and the Reserved List on the heels of the Eternal Masters release when he shared with me his dirty little secret for beating the system: altering counterfeit cards.

As many of you undoubtedly already know, there has been a big problem in the past few years with counterfeit cards making their way into circulation. A few years ago there was a big scare where an overseas company was taking orders for fake MTG cards and selling them over the web! In fact, the counterfeit problem is believed to be one of the primary reasons for the WOTC redesign of the MTG card face to include holographic icons on rare and mythic rares. Basically, the maneuver is a deterrent for counterfeiting at least the new cards.

As one collector to another I don't think I need to explain why the introduction of fake cards into the MTG economy is bad, bad news...

One of the primary ways that counterfeit cards are found and identified tends to be that it is difficult to get the font and spacing in the text box exactly correct. In fact, aside from the "bend test" and the "light test," paying close attention to the actual printed text is a big clue to finding a fake.

What I learned from this collector is that there are lots of people who have actively sought out these high-quality, Chinese fakes with the intention of having artists do elaborate alters to hide as much of the card face as possible.

You know the kind of alter that I'm talking about. The kind where the artist makes the card "full art" or extends the image all the way out across the card face. So, essentially one can buy an inexpensive counterfeit Magic card and then have an artist do an alter to the card that makes it very difficult to distinguish any identifiable characteristics of the counterfeit.

Even the traditional thickness or bend tests kind of go out the window once a card has had a thin layer of paint applied to it. Also, good luck doing the "light test" to a card that has been painted on...

It is a pretty ingenious little scam... Pay $15 for a counterfeit Mishra's Workshop, Mox, or Black Lotus and $50 to have an artist make a nice full-art alter and you've basically built your own $800+ card for $75, each. $50 will actually get you a pretty high-end alter; if somebody really wanted to skimp on min investment they could have an amateur alter the cards for much less. Come to think of it, "full art" on the new anti-counterfeit design would also cover up the hologram icon.

Not that there is a ton of money in counterfeiting new cards and trying to alter them. However, somebody in the know once told me that Beta basic Island is one of the most counterfeited cards in existence. It's a $5-$10 bill and honestly who is ever going to bother to check the authenticity of a Beta Island? People are much tougher on more expensive cards.

The person who told me about this trick had actually acquired several counterfeit cards and had alters done to them and I would never have been able to tell the difference. This individual was using the altered counterfeit cards in a cube and assured me that he never used them in tournament play and absolutely never tried to pass one off as a real one in a sale.

The thing that amazed me about the whole process is that the altered fakes looked fantastic! The expense that he had spared by buying a knock-off he certainly reinvested into the artwork because the cards had gorgeous artwork and alters done to them.

If I was an opponent of a player using these altered fakes I would certainly not have thought they were illegal cards in the slightest. In fact, my assumption would be that anybody who was willing to invest their time, energy, and money into having elaborate alters done to their cards wouldn't bother with counterfeits! Not the case, in some instances, I suppose.

My biggest concern was actually that if I was a potential buyer I wouldn't have been able to tell the difference either! Not only that, but I could certainly see buyers being drawn to these cards with amazing and obviously skilled alterations. It would also be very difficult to authenticate any altered cards because they have paint and alterations done to the front face of the card that blocks out much of the identifiable characteristics!

I'm not writing about the topic as a blueprint for scammers to follow. I'm fairly certain that if some random Cube Guy figured it out that the most devious, criminal scammers in the MTG community would probably have thought it up already. Like I said earlier in the article, the concept of forgery cards isn't exactly a novel idea and has been a long-standing problem in the collectible community for years.

I'm also not super afraid that some future scammer is going to read this article, considering that the QS readership are a very upstanding crop of collectors. I'm writing about the topic because I think it is interesting and entertaining, but mostly because I think it is a relevant cautionary tale that might one day save some unsuspecting QS reader a lot of money on a bad deal. I'd certainly hate to think of some innocent collector getting taken on a bunch of altered fakes!

My hope is that people will read this article and make a mental note that buying altered cards can be a risky proposition if you don't know or trust the seller.

I'm not saying to be "anti-alter." A good original alter by an artist is a very cool customization that can be made to a card. I certainly don't want to discourage that. In fact, I have a few alters in my collection that I've had done personally and I love each and every one! My whole point is that when you are dealing in high-end cards with excessive alterations to keep in mind that something could be up.

I don't have great advice about how to defend against these alters except to advise buyers make sure you know and trust the individual you are dealing with. Or, just get alters done yourself---that way you know for sure that the card being altered is indeed authentic.

8 thoughts on “Beware the Altered Fake”