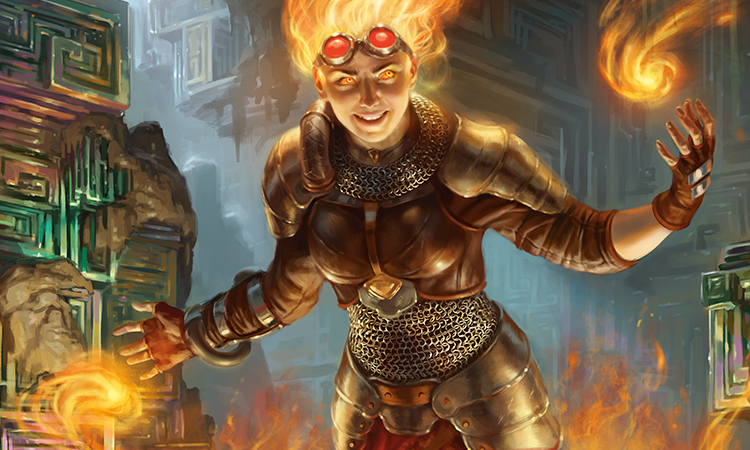 Hi, everyone! Welcome back to another Buy, Sell or Hold.

I would like to start with a brief explanation of two financial terms I will be using quite often: support and resistance levels. 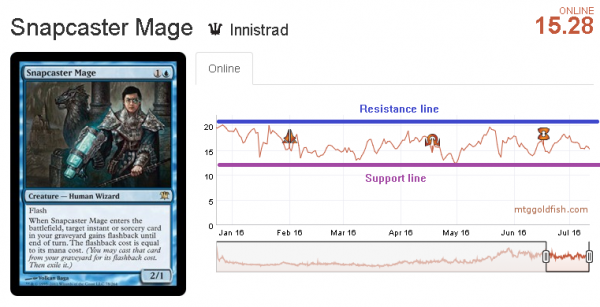 Snapcaster Mage's support level is at 13 tix and its resistance at 20 tix. For a definition of the terms, I'll turn to Wikipedia's explanation:

A support level is a level where the price tends to find support as it falls. This means the price is more likely to "bounce" off this level rather than break through it. However, once the price has breached this level (by an amount exceeding some noise), it is likely to continue falling until meeting another support level.

A resistance level is the opposite of a support level. It is where the price tends to find resistance as it rises. This means the price is more likely to "bounce" off this level rather than break through it. However, once the price has breached this level, again by an amount exceeding some noise, it is likely to continue rising until meeting another resistance level.

You may notice these are very close to the way other authors have used the terms "floor" and "ceiling." Those terms can have other meanings though, so I prefer the more precise and technical terms defined above.

Now it's time for speculation!

Since a month after release, Chandra has been bouncing between 13 tix and 21 tix, with peaks at 27 tix. That's a wide range. Nowadays it's at 14 which is very close to a historic low and it's going to be in Standard for a long time. The card has proven to be a sweeper staple and could easily return to 20 tix after the release of Eldritch Moon.

Given that it's a mythic it has the potential to reach 30 tix or more if it's heavily played, which is why I wouldn't sell it into a quick spike.

Legacy leagues began one week ago and speculators are liquidating their cards. Demand seems to have ceased and after Legacy events end players could be tempted to sell their decks. I don't expect this card going anywhere but down. I would sell it even with a loss to minimize the impact.

This is an all-star Modern staple and a clear example of support and resistance lines, with the card bouncing between 2 tix and 3.3 tix. Conflux flashback draft were playable this week, so I recommend investing in that particular edition.

It is such a solid pick that I would have even invested in Path to Exile if there were no flashback drafts. I'm looking to sell as soon as it reaches 3.3 tix again.

This card is tricky. I have been wavering on whether to invest in it for a few weeks. On one hand, it's one of the strongest cards in Standard and the price is so tempting. On the other, it's leaving the format soon.

The future of this card is totally uncertain to me and I don't like gambling. When I am in doubt I prefer to avoid it. I can see myself buying it after a quick drop to its previous spike level around 1.5 tix. If had bought any copies already, I would keep them a bit more trying to find a rebound to close the spec profitably.

Thematic decks don't often reach the competitive level, not even in Standard. It would be a completely different scenario if the Block format were still played, but is not. That said, this fact is often ignored by casual players or speculators, which could explain the last two spikes surrounding hyped zombie decks with new cards from Eldritch Moon.

In order to determine if this is a a good investment or not we would have to do a deeper analysis and some math. Cheap cards have the worst spread but given that it's a Standard card and a rare it's somewhere in the middle with a 25% spread. If we buy it today at 0.5 tix we will have to sell it over 0.7 tix to cover the spread, and around 0.9 to 1 tix to make a decent profit. Also keep in mind that if you buy (and then sell) multiples copies, the price will adjust in a negative way.

The other thing we have to analyze is why this card would rise. This part is simpler. If a good zombie deck puts up results at the Pro Tour this card will spike, otherwise not. That is something that we can't know ahead of time, but my personal opinion is that it's not going to happen.

On the other hand, if the card keeps bouncing between 0.3 and 0.7 tix that is a great opportunity to buy and resell it as it fluctuates. This is a buying window that will only be open prior to the Pro Tour. We have only three weeks left if you're trying for a strategy like that.

See you next week! Don't forget to send your feedback in the comments below.