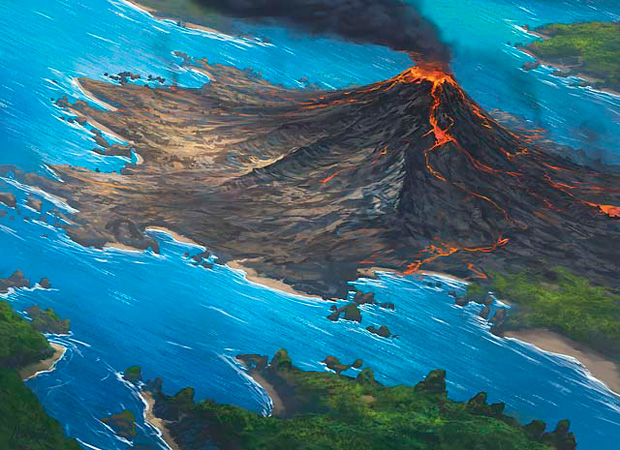 To quote the essence of Stephen King’s epic take of The Gunslinger, it is safe to say that, with regards to Magic, the world has moved on.

I began playing Magic in 1994; even back then it was clear that Magic cards had a future---and with that came exciting financial possibilities for collectors. That was, of course, until the dreaded Chronicles set came out and threatened to destroy the game and those possibilities outright. 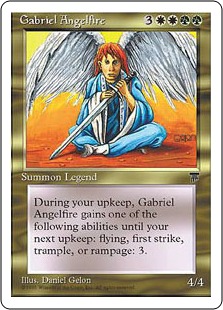 When Chronicles hit, many people were terribly unhappy at having learned the gems of their collection could---at any time---be reprinted, lose their rarity and notoriety, and in turn negatively affect the owner’s bragging rights and investment. As an eventual response to this, the Reserved List was created and a promise to all players on behalf of Wizards of the Coast was made---the gems of your collection will never again be reprinted.

I have spoken to some who said that Wizards should have known better than to make such a promise (given the current financial status of many iconic cards) but I personally believe that back then, there was no way the company could have predicted what the game would eventually turn into.

But alas, the world has moved on.

Magic: The Gathering has become a multi-million dollar business, and not just for Hasbro/Wizards of the Coast; there are millions of dollars that change hands monthly in the secondary market at Grand Prix alone, not to mention third-party sellers like eBay, TCG Player and so on. And like it or not, Magic is an unregulated free market that literally anyone can make money with.

Taking this prosperous opportunity to a new level, we have recently seen clear and admitted buyouts of Legacy staples that have dramatically increased the prices of those targeted cards (most recently City of Traitors and Helm of Awakening) 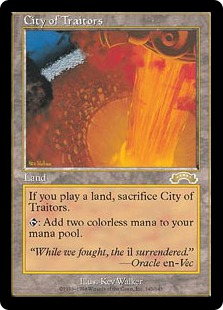 while making those behind the buyout a lot of money.

What’s even more unprecedented is that instead of whispers and murmurs of a phantom "somebody" buying copies of any given card (I’m thinking of the Zendikar fetchland buyout a few years back), there is now actually a face to these buyouts. This is a man who has come forward and has said, "Oh yeah, those buyouts---I did that."

Craig Berry recently gave an interview to Corbin Hosler where he talked openly about having recognized the financial potential of buying up cards in order to capitalize upon them later. This is the man who bought out Moat and Lion's Eye Diamond, and who can very arguably be credited with the corresponding price adjustment for these cards.

Now, there are two sides to this argument. On one side, you have the business-minded folks who argue that Craig Berry did nothing more than take advantage of an opportunity. He had the financial means, the imagination, had done the research and maybe most importantly had the courage to drop a huge amount of money into one card, knowing that there is always a risk that the eventual flip might actually lose him money. 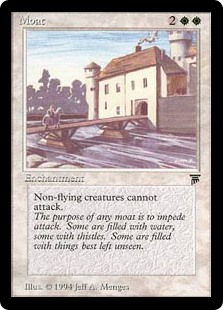 (It turns out in retrospect that perhaps the risk wasn’t actually all that great, and he knew it.)

You also have the other side of the argument---there are the people who feel that by buying out a card, that person is destroying the essence of the game by making it all that much harder for players who need those cards to acquire them. This argument implies that everyone who is involved with this game should recognize that this game is based around a community, and that by buying every copy one can of a card with the interest of watching the price adjust accordingly, such a person is actually working against the community.

The reality of the situation is that there is likely no right or wrong side. You’re going to have people who are passionate about their stance, but the secondary market of Magic is a free market with no way to be regulated, and it is open to anyone to... dare I say... manipulate? Sure, manipulating the market is in many ways disrespectful to the community as a whole...but does that make it wrong? More to the point---what can one do about it?

The Future of the Magic Market

In an article published last week on Kotaku.com, it was announced that Martin Shkreli, the multi-millionaire ex-CEO and businessman notorious for raising the price of the antiparasitic drug Daraprim by 5,556% simply because he could (and in turn making the drug absolutely unaffordable by most who relied upon it), has turned his attention to Magic: The Gathering. 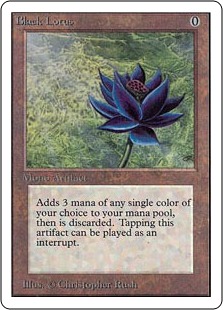 A man who, arguably, could be considered the most despised man in America has recognized the possibilities of this free market.

What would happen to the game if someone with the sole intent of manipulating the market in order to turn a profit, and who had the financial means to do so, actually went through with it? What would the ripple effect of such an action have on the average player? These are all excellent questions. The only thing I could think of was the potential for Wizards to outright abolish the Reserved List as a response, regardless of the consequences.

What consequences? Theoretically, businesses from Star City Games right on down to your local game store could make an argument that by abolishing the Reserved List, Wizards of the Coast/Hasbro would be breaking an agreement to never reprint certain cards---an agreement that these businesses have relied on to make potentially enormous financial decisions. And should they decide to reprint them anyway, these businesses could theoretically sue for negative financial impact. 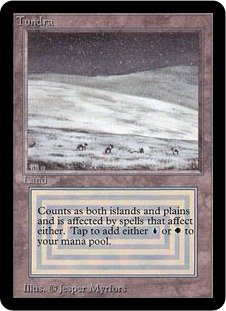 Admittedly I’m not a lawyer so I don’t know the ins and outs of these sorts of things, but in America, people get sued for seemingly anything.

Now, on the other hand, how good would an Eternal Masters set do if it included Revised dual lands, and other highly coveted cards such as Moat and Lion's Eye Diamond?

Could the potential lawsuits actually be worth it in order to stop someone like Martin Shkreli from getting his hands on the game as a whole? And what if he sues himself? In fact, he threatened to do just that in response to a Twitter question on this exact topic. What could possibly be the end game here?

Folks---the world has moved on. Magic finance is ever-changing, and the intentions of some people may not be wholesome or innocent. What will happen next? I don’t have that answer, but everything starts with a conversation, and I encourage you all to start talking.

The world is still moving on. Where it ends up, only time will tell...