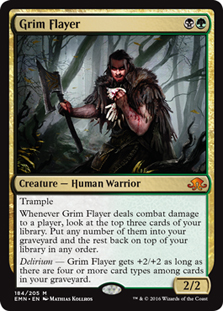 Man, Eldritch Moon prices have dropped quickly! Grim Flayer pre-ordered initially for $15, then fell to $10 where I thought it was an interesting proposition, and now has dropped to $7! Seeing as buylist prices are still above $5, this price definitely has my attention.

The reason for the dip is that the aggressive delirium deck just didn't have a week one that inspires confidence. All eyes were on Spell Queller. Further, the most successful "delirium" deck was the Sultai nonsense that Ali Aintrazi made the finals of the event with. To find Grim Flayers in Columbus, you have to make your way down to Todd Stevens' 20th place list. In Stevens' article on the deck, he speaks very highly of the card, and I'm inclined to agree with his findings.

What's interesting to me, is that Liliana, the Last Hope is gaining traction and the price is holding strong, while Grim Flayer is dropping despite fitting into what stands a good chance of being the best Liliana deck! Not to mention that Grim Flayer gets under Spell Queller, which is going to be very important in Standard. The lower the price drops, the more bullish I get.