While looking over the Competitive League decklists, I came across a really cool one. Tamiyo, Field Researcher has gotten a lot of hype since she was spoiled, though for the most part the focus has been on her +1 ability, and including her as a 1-2 of. Today's deck takes advantage of the +1 ability, but it also looks to aggressively use the -2 to lock down opposing creatures. Check out the list that Misterfalcon used to 5-0 a Competitive Standard League:

This deck is very particular about the creatures it chooses to include, with an emphasis on value and rate. Sylvan Advocate is the only creature that makes the cut on rate, and the other creatures are all able to generate card and/or tempo advantages with their abilities. While Advocate may not have any non-combat abilities, it does do a great job at holding the fort in addition to being an efficient threat to target with Tamiyo's +1. Beyond that, the deck aims to counter, kill, or otherwise incapacitate all of the opponent's plays. Tamiyo is great at locking down opposing creatures, and access to the full four allows you to -2 the turn you play it and the turn after just to play another copy.

For me, the big lesson here is not only that we can play four Tamiyo, but also that we can do so in a controlling deck. This deck is more than fine using the -2 on back to back turns just to play another Tamiyo, and indeed it's not hard to imagine playing a deck more focused on the +1 once Collected Company rotates. 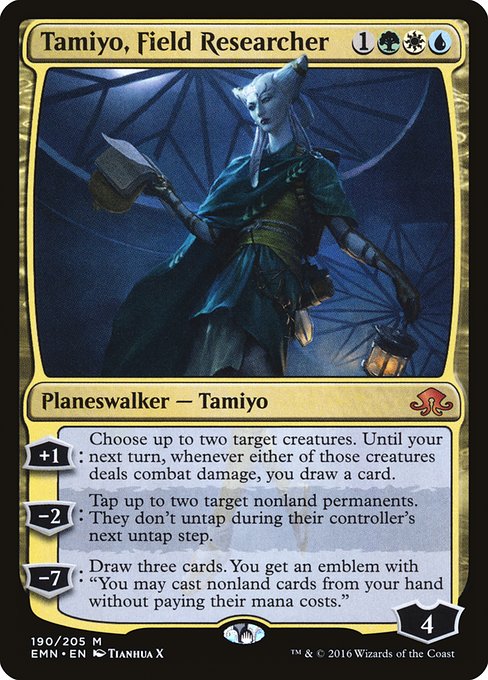 Standard has a lot going on right now, and one League is nothing to go nuts speculating over, but this is still worth paying attention to as deckbuilders, and there is likely to come a time when this deck can inform speculation. I would expect that Tamiyo will depreciate in value for the next month or so, and given the knowledge that the card just makes sense in multiple shells as a four-of despite being three colors I imagine that we'll see a point where she becomes a very solid buy. For now, this looks like a cool deck to play, though the current price is a little high. Her time will come though.