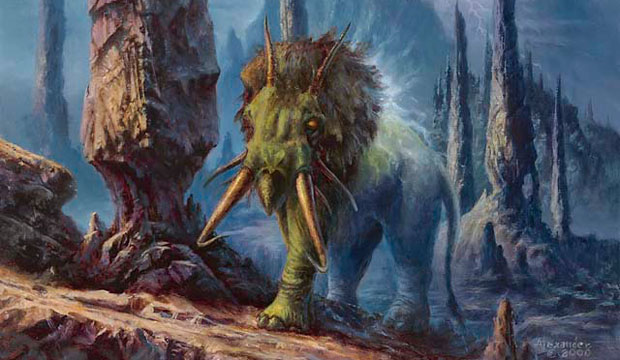 Welcome back to another Buy, Sell or Hold! This week I watched a lot of the Olympic Games competition and cheered for Argentina in every event we participated in, even those I don't understand much. For this episode I'm going to add a little twist and rate the cards with Gold, Silver or Bronze just to make it a little more entertaining.

Greater Gargadon went from almost unplayed to Dredge's new best friend. Thanks to hints from Quiet Speculation on Dredge's rise, specifically in Star City Games tournaments, I was able to grab some copies at 1 tix. Now it's at 2.38 tix, a historic high.

From a technical analysis perspective the card should be sold. But from a theoretical point of view, the new version of Dredge first started in paper Magic and is still making the transition to MTGO. SCG tournaments don't have the same influence as Grand Prix or Pro Tours---so there might be a few players that still are unaware of the deck's upgrade. Keep in mind that we have a triple Modern GP at the end of the month, and those events could catapult the price even higher.

Buying at the current price is a bit risky, which I wouldn't recommend unless you like the hit-or-miss strategy. But I will definitely wait to sell my copies until the Grand Prix weekend.

Thoughtseize is one of the best discard spells in Modern and surprisingly its price has been in a plateau for a long time. The current price is an excellent buy-in point for some extra copies. The deadline to sell them will be when Theros flashback drafts hit MTGO, at least four months from now.

Investing in cards from new sets on MTGO is extremely hard and usually a mistake, because prices tend to go down as supply increases from drafting, and support levels are difficult to identify. In my opinion, Eldritch Evolution is one of those exceptions to the rule.

Before the release of Eldritch Moon (EMN) it was one of the most hyped new cards---I even read some players saying it should be banned in Modern. What is the scenario nowadays? Unplayed in Standard and occasionally played in Modern; not a format shaker.

I don't think the card will go much lower. On the other hand, Natural Order's little brother could spike super high as soon as it sees Standard play and we still have a bunch of upcoming sets for it to interact with.

Standard rare dual lands have trends that are easy to identify. Instead of buying them when they hit their low price and selling it at their high, it's more profitable in the long term to buy and resell them many times with a narrower profit. Hissing Quagmire is currently on an upswing, and I see it coming down again.

Collective Defiance has been one of the most volatile cards in EMN. Lately it found a home in the U/R Spells deck, and because of the delay in adoption the price went up, unlike most EMN cards. I don't see any reason for it to keep rising so I recommend selling any copies you might have.