Below are the total set prices for all redeemable sets on MTGO. All prices are current as of August 29th, 2016. The TCG Low and TCG Mid prices are the sum of each set’s individual card prices on TCG Player, either the low price or the mid price respectively. Note that sets of Theros (THS) are out of stock in the store, so this set is no longer redeemable. 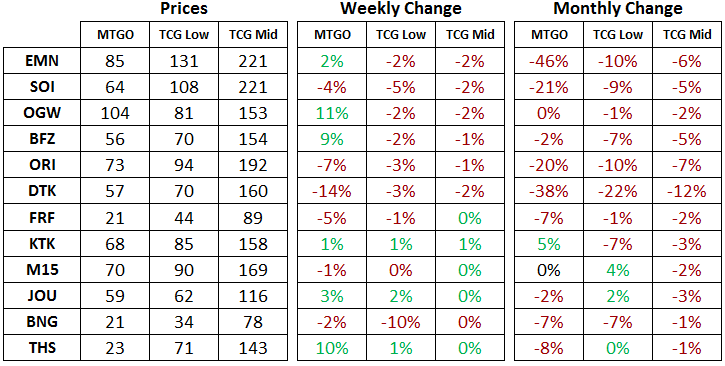 They were only hinted at in Zendikar (ZEN) and Worldwake (WWK) expansions, but the Eldrazi got their official introduction in the third set from ZEN block with Rise of the Eldrazi (ROE). This is a large set and a standalone draft format, with a completely different set of mechanics when compared to ZEN and WWK. Flashback draft queues start today and run till next Wednesday. This is a popular draft format so be sure to check out Simon Goertzen's draft primer if you want to brush up on triple ROE draft.

On the financial side of things, Emrakul, the Aeons Torn is a staple of Modern and Legacy and priced accordingly at over 10 tix, even with a reprint in Modern Masters 2015 (MM2). Inquisition of Kozilek is a staple of Modern due to its efficiency. It's priced at 2 tix currently, but has peeked over the 5 tix level multiple times.

With Conspiracy 2 confirmed not coming to MTGO, we don't know yet how or when any of the Conspiracy 2 cards will be released on MTGO. With no information on a pending digital reprint, players and speculators should be targeting Inquisition this week. It's possible that a new Legendary Cube prize booster is created that contains relevant constructed cards from Conspiracy 2, but it's also possible that a MTGO-only reprint of Inquisition of Kozilek is deemed unnecessary.

After these two cards, the pickings get rather slim. Linvala, Keeper of Silence used to be a staple of Modern sideboards, but with the advent of the linear aggressive strategies such as Death's Shadow Zoo and Infect, there's just not much use for a card like this anymore. Modern will have to slow down for this card to come back into vogue. Speculators with a long-time horizon shouldn't be afraid to accumulate these, but there won't be a quick payoff on this one.

Players and speculators with an eye to the flashback queues coming near the end of the year could look to Return to Ravnica (RTR) and Gatecrash (GTC) boosters. Both of these are drafted in triplicate, and both currently have prices below 2 tix per booster. If you think you'll enjoy revisiting these draft formats, this is a good price to salt a few boosters away at.

Although the trend in the paper price of Standard sets is still down, both Oath of the Gatewatch (OGW) and Battle for Zendikar (BFZ) saw price bumps this past week on MTGO. Kozilek's Return is the new top card in OGW, rising to over 22 tix. Temur Emerge decks certainly look set to transition into Fall Standard, so there's a chance this card could power on to the 30 tix level. Chandra, Flamecaller is another OGW card that rose this past week, going from her low of 8 tix back to over 10 tix.

On the BFZ front, there is no particular card that rose a great deal to move the price. It's possible that the MTGO market is anticipating a renewed interest in Standard in October with the pending release of Kaladesh. Speculators should be targeting cards from these sets that they feel are under-appreciated in the current Standard format though broad-based buying is not recommended at this stage in the set cycle.

For Magic Origins (ORI) and Dragons of Tarkir (DTK), Fall rotation looms ever closer. Jace, Vryn's Prodigy looks set to head below 20 tix and could bottom out at 10 tix or less in October. ORI in general looks like a tricky set to evaluate for speculators. Although the opposing-colour painlands are nice, the list of first-printing Modern staples has to be considered almost empty, with Abbot of Keral Keep showing some promise in Modern last year.

I'll be watching for a bottom in paper prices, which should trigger some interest from redeemers. October will likely be a good time to hone in on specific cards from ORI, although there are many junk mythic rares from this set that have been at attractive prices recently.

DTK, on the other hand, has a number of Modern staples at rare, including Collected Company, Atarka's Command and Kolaghan's Command. These three cards should support the price of mythic rares from this set via redemption, so targeting a card like Ojutai Exemplars would be a low-risk route to speculative profit.

The current set price of DTK also compares well to Magic 2015 (M15) and Khans of Tarkir (KTK), the last two large sets to rotate out of Standard that are still redeemable. Keep an eye on DTK set prices but we might already be in a good buying window.

The triple Modern Grand Prix weekend gave us an excellent look at the current Modern metagame. With Splinter Twin now firmly in the rear view mirror, a number of linear aggressive strategies have come to the fore. Death's Shadow Zoo, Infect, the ever present Affinity, as well as a variety of Burn decks are all Tier 1 strategies battling it out at the top tables. Check out all the top decks here, here, and here.

A little more under the radar is the new variant on the Grishoalbrand strategy, which eschews the colour green and the Nourishing Shoal and Worldspine Wurm life gain combo for better card selection and a little bit of counter magic with the addition of blue. Notably, Collective Brutality looks to have found a spot in Modern as an excellent discard outlet for this deck, allowing it to cheat out Emrakul, the Aeons Torn and Griselbrand from the graveyard.

The other option is to cheat these massive creatures out from your hand using Through the Breach. The MTGO market clearly likes this strategy as that card has just hit an all time high of 26 tix. It also appeared elsewhere this weekend in what used to be called a Scapeshift, though that particular card is no longer fast enough for Modern it seems.

As usual, the portfolio is available at this link. This week I jumped in on a single card spec with Grim Flayer from EMN.

This mythic rare looks to be Modern-playable alongside Tarmogoyf in green-black decks. This bodes well for its future price. As Sheridan Lardner pointed out in his Monday article, Grim Flayer could go the way of Kalitas, Traitor of Ghet as a small-set mythic rare that sees play in multiple formats.

With the drafting window of EMN winding down, I wanted to get a substantial position built in this card and was willing to jump in at current prices. It might not be the absolute bottom, but the current high level of interest in Modern could act to accelerate price gains on this card.