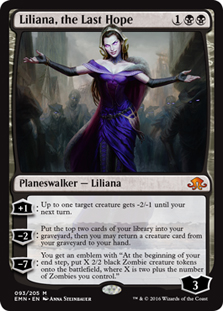 The new Liliana was met with some skepticism, though now it is generally recognized as a powerful card. It doesn't have the most impressive numbers yet, though it is clear that she can compete. That said, with Liliana's current price you'd think she was a four of in Bant Company or something.

Liliana did crack the Top 8 in Baltimore, and she was also featured in three more decks in the Top 32. I expect Liliana to continue to put up similar results, though there is clearly a big difference between these results and format dominance. As such, I would expect Liliana to decrease in price unless she starts putting up significantly better results.

$35-40 is either the pre-order price of an over-hyped mythic or a format defining one. Liliana is neither of these things. I would buylist any copies that I had at this time, and expect Liliana's retail price to drop closer to $20 unless she somehow has a dominant Pro Tour performance. If she doesn't crack the Pro Tour Top 8, you'll definitely be sorry to still be holding onto copies of this card.