Hello investors and welcome back! This week has been a blast for me as I managed to win the Battle of Tix hosted by Cardhoarder, the first ever Magic Online finance competition. I hope there will be other competitions in the future where I will try to participate as well; this might be the beginning of something bigger in the finance community. About the speculations for this episode, we are in a particular scenario, hard to invest with very few good buys, because of the Modern Masters 2017 announcement and draft league events. So let's get going:

I'm not sure how big will be the impact in price of the newly introduced Draft League, but one thing is certain it will lower the prices. Add it that we are one moth away from the new set online prerelease, so people usually sell all of their cards. My personal strategy is to close every position from EMN or SOI that it is positive and rebuy them in a few days cheaper. 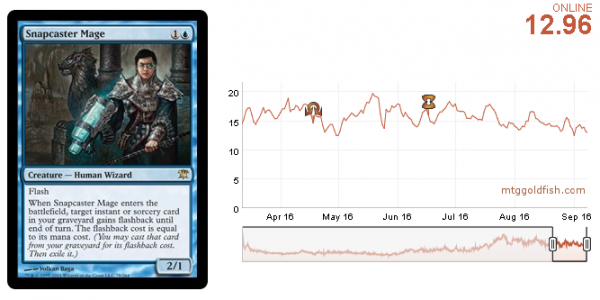 People are so worried about this mage being reprinted that I expect a second wave of sells making the price go lower. It doesn't really matter if it will be reprinted or not (for now) because you can't control what other investors or players will do. With the information we currently have I think its better to sell it as soon as possible to minimize the loss. If the don't reprint it, then yes I will happy to buy them as they will spike fast. 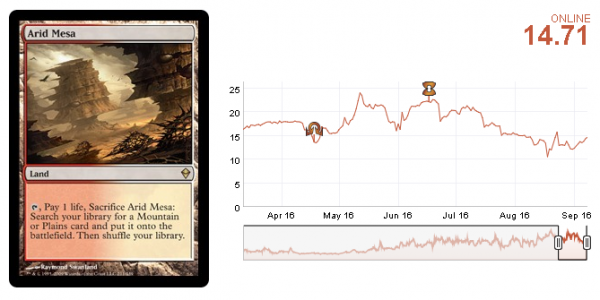 Zendikar flashback draft ended a dew days ago and fetchlands have already rebounded, but I don't think it's a good move to liquidate them so fast, not even if you like the short term strategy as much as I do. A good moment to sell them would be after all Modern Masters 3 have been spoiled. If you check price history of modern staples you will see that many of the staples that weren't reprinted in Modern Master sets spiked really high with a price adjustment after that. I don't think they will reprint them, but it is definitely a possibility, in this case I would sell them as soon as they are spoiled.

One of the very few cards from the sets leaving standard that is playable in modern is Collected Company. You might be tempted to buy them because they are really cheap, but wait! Just wait a few more weeks, after it leave the format or after the Pro Tour when people would want to change their decks, and you will find a much better price. 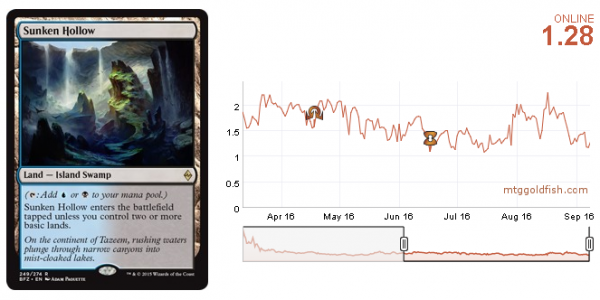 One of the few secure buys this week are cards from BFZ and OGW sets. Sunken Hollow is at the bottom of its trend, so its a good time to buy in. I prefer to sell it for a fast 10% to 20% profit rather than waiting for the Pro Tour for a bigger profit.

That's it for right now, see you next week!