Below are the total set prices for all redeemable sets on MTGO. All prices are current as of September 19th, 2016. The TCG Low and TCG Mid prices are the sum of each set’s individual card prices on TCG Player, either the low price or the mid price respectively. Note that sets of Theros (THS) are out of stock in the store, so this set is no longer redeemable. 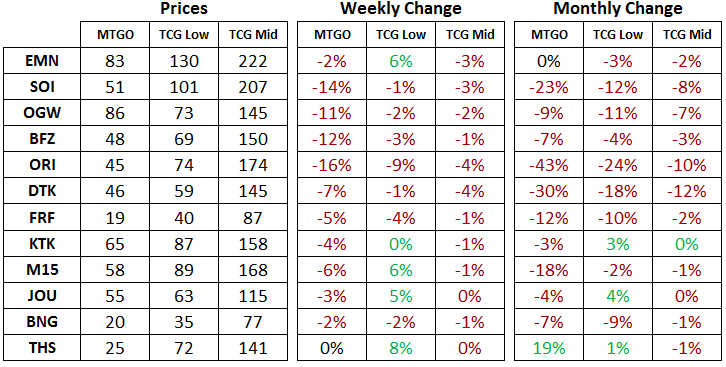 This week a booster of Mirrodin Besieged (MBS) is added into Scars of Mirrodin block draft. This addition ups the expected value for drafters substantially, as Inkmoth Nexus shows up in the rare slot from MBS.

This land is a key component in both Infect and Affinity strategies in Modern and has proven to be an excellent card to speculate on over the years. Both players and speculators should be on the lookout for this card if it gets into the 20 tix range, which would be a low-risk level to be a buyer at.

Dragons of Tarkir (DTK) and Magic Origins (ORI) are both set to leave Standard shortly and their set prices are acting accordingly, with both dropping below 50 tix this week. Value in both sets has been consolidating in different areas.

For DTK, it's been focused on the Modern staple rares, Collected Company, Kolaghan's Command and Atarka's Command. In ORI, which has fewer standout Modern cards, value has been flowing to the junk mythic rares, with Starfield of Nyx and Alhammarret's Archive now two of the more expensive cards in the set at over 3 tix each.

Typically sets rotating out of Standard will bottom in the week or two in or around rotation, so there is further downside on the set prices overall. Below is a chart of how the price of all recent large sets have acted at rotation, including DTK, ORI, Khans of Tarkir (KTK), Magic 2015 (M15) and Theros (THS). 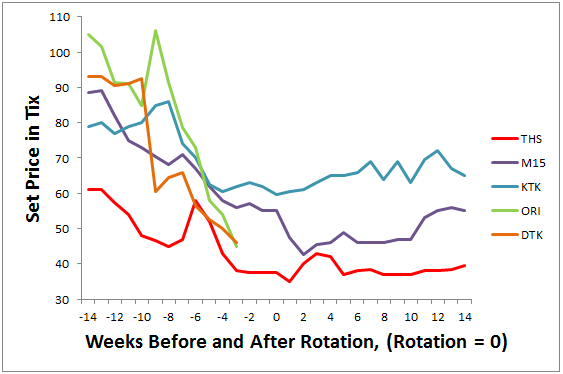 This chart suggests these sets are close to a bottom, so players should not be afraid to pick up Modern cards they have been eyeing from these sets. Speculators should be a little warier of these sets though, considering the somewhat weak returns visible in these charts post-rotation. As a speculator, the better option in my mind is to focus on Shadows over Innistrad (SOI) and Eldritch Moon (EMN).

The current draft format featuring these two sets is set to take a back seat to triple Kaladesh (KLD) booster draft this weekend with the paper prerelease of the new set. This means we are at peak supply from SOI and EMN right now. Comparing the price of SOI with THS, KTK, and Battle for Zendikar (BFZ), we can surmise that SOI must be near a bottom. Have a look at the chart below to see what I mean. 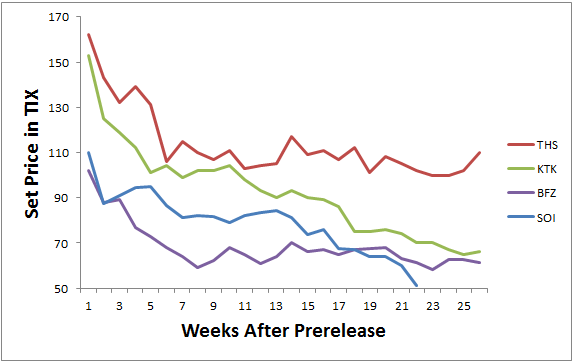 Each of these sets is an imperfect comparison. THS held a very high price for a long time and is clearly an outlier. KTK was drafted first in triplicate, and then two boosters at a time, and also had the all-format staple fetchlands supporting its price.

BFZ is the closest in comparison since it was drafted in a similar fashion, first in triplicate and then as a singleton with the release of OGW. But BFZ had the Expedition inserts which would weigh down the price of a digital set since these special cards are not redeemable. I left DTK and ORI completely off the comparison chart due to those sets being opened for shorter lengths of time than any of the compared sets.

It appears that the price of SOI is currently depressed. Certainly the introduction of leagues (both sealed and draft) has had an impact on prices as an extra source of supply that the other sets did not receive (except for BFZ to a small degree). The fact that SOI was being opened over the summer is also a big difference between these sets. Winter is typically the period of time when interest in Standard and prices in general see their peaks.

With all of this in mind, SOI appears to be good value right now. Players and speculators alike should not be afraid to shell out tix for cards from this set. 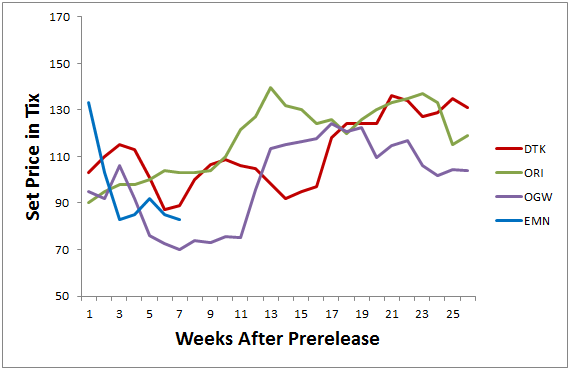 EMN is certainly on a similar track, but is relatively more expensive than its closest comparable in OGW. That set saw its absolute bottom at the seven-week mark after its prerelease, which is where we are right now in weeks out from the EMN prerelease. Like SOI, EMN appears to be near a bottom and its no surprise to see it coincident just prior to the release of KLD.

If I had to choose between SOI and EMN, I think EMN has the edge due to the robust price gains recent summer releases have seen, though I expect both sets to appreciate in price over the coming months.

This weekend, Star City Games held a Modern Open in Orlando. Tom Ross piloted an 8-Rack deck into the Top 8, an archetype that comes in and out of fashion somewhat but is firmly lower tier.

This deck seeks to empty the opponent's hand as quickly as possible with a mana curve that tops out at 3. Smallpox and Liliana of the Veil do double duty as part of the hand disruption package as well as controlling creatures that make it onto the board. The Rack and Shrieking Affliction are the namesake "8 racks" and are the primary victory conditions for the deck.

Ross also wrote about the impact of Kaladesh (KLD) on the Modern format over at Star City Games behind the paywall. The main observation I pulled from that article is that Dredge strategies are getting an upgrade in the new card, Cathartic Reunion. For the same mana cost as Tormenting Voice, you get to discard two cards instead of one and draw an extra card, meaning an additional dredge trigger. Alongside the recent upgrades this deck has seen from SOI block, this card looks set make Dredge even better.

The price of Golgari Grave-Troll certainly agrees as it hit an all-time high this week of 24 tix. It's difficult to recommend buying a card at an all-time high, so speculators should look elsewhere for potential targets. Bloodghast is another staple out of this deck and after the recent Zendikar flashback drafts, it's sitting at the bottom end of its price range at around 7 tix.

Sideboard answers against this deck are also reasonable targets. Look to Rest in Peace from Return to Ravnica and Grafdigger's Cage out of Dark Ascension, though do keep in mind the flashback draft queues will be visiting Innistrad at the end of October.

SOI and EMN boosters have taken a step back this week, after jumping up with the introduction of draft leagues. Look for these to fall further, especially on the prerelease weekend for KLD. Prerelease events are tix-only and many players will be looking to sell their extra boosters for tix that weekend. Players who want to revisit the EMN-SOI draft format should save a few tix to buy boosters on that weekend.

Elsewhere, OGW boosters have dipped back below 3 tix, while BFZ boosters are steadier in the 1.1 to 1.2 tix range. Both look like they are near a long-term price floor, but they are about to become the oldest Standard draft format. Like SOI and EMN, these will dip in early October. Longer-term, I'd expect the price to track their respective set prices, which will rise as we head into the winter and more players come back to Standard on MTGO.

As usual, the portfolio is available at this link. This week I have been stocking up on sets of EMN and SOI. As I detailed above, both sets are at or near their bottom due to being near the end of their draft cycle.

It's an excellent time to be buying anything from these sets---buying a basket of everything reduces the risk in trying to pick one or two winners. I will be looking to hold these cards into the winter, with some possibility of selling individual cards into price spikes due to coverage of the upcoming Pro Tour event or other Standard event.