Below are the total set prices for all redeemable sets on MTGO. All prices are current as of September 26th, 2016. The TCG Low and TCG Mid prices are the sum of each set’s individual card prices on TCG Player, either the low price or the mid price respectively. Note that sets of Theros (THS) are out of stock in the store, so this set is no longer redeemable. 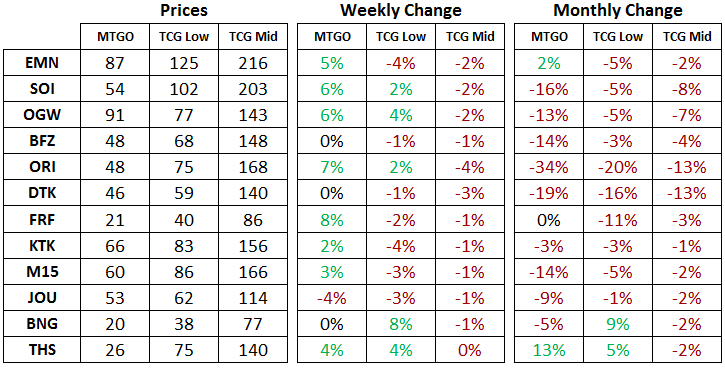 The final booster gets added to Scars of Mirrodin (SOM) block draft this week with New Phyrexia (NPH). The new booster is full of valuable cards, including two non rares that go for over 4 tix each in Gitaxian Probe and Dismember. Keep your eyes out for these Modern staples as they will help to keep the costs of your draft down. Batterskull, Karn Liberated and Spellskite are the top rares to look for.

Eldritch Moon (EMN) and Shadows over Innistrad (SOI) continue to be the sets to focus on in Standard as this draft format nears its conclusion. Last week I examined whether or not these two sets were at or near their price bottoms based on how long it took similar sets to bottom out, and all signs pointed to them being close to, if not already at, a bottom.

This week both sets have rebounded by about 5% but they still represent excellent value. To illustrate another possible way to evaluate this, I'm going to revisit a metric I have used in the past. It's a simple ratio between the MTGO set prices and the TCG Mid prices as reported in the set prices table. The one extra wrinkle is that the redemption fee of $25 is tacked onto the MTGO price before calculating the ratio. Although I am mixing tix and dollars in this ratio, the point is to get a sense of relative value between sets on MTGO and in paper. Drawing a precise meaning from the ratio is not the goal of this exercise.

Produced below is the current TCG Mid ratio for all redeemable large sets, as well as the average ratio calculated from historical weekly prices. There is also an "Average" column which is a simple average of the various ratio numbers, excluding the SOI ratios. Note that Theros (THS) is no longer redeemable due to being out of stock so it is also excluded from this table and any calculations.

The current TCG Mid Ratio for SOI is lower than any other redeemable large set and is 23% below the current average of these large sets. This suggests SOI has room to expand its ratio, either by a drop in the price of paper sets, a rise in the price of a digital set, or some combination of the two. The seasonal trend is for higher prices as we head into the fall and the other trend is the end of SOI drafting. Both of these trends gives confidence that the price of a digital set of SOI is set to rise. I think that the ratio will at least reach 0.50 as the winter approaches.

This type of stress testing, combined with historical experience, the power level of SOI, and the fact that the set was drafted over the summer, suggest a very limited downside at current prices.

All this theorizing was done in a worst-case-scenario perspective, but the upside is unaccounted for. It's possible that SOI actually appreciates in paper, dragging up the price of digital sets through redemption. A 10% increase in the TCG Mid price to 223, holding the ratio constant at 0.50, implies a digital set price of 87 tix.

Again, this is a worst-case scenario I am looking at. For both EMN and SOI, the risk of buying sets is largely just the opportunity cost of holding them. There is very little downside risk on the set prices themselves, and plenty of room for an upside surprise. Players should have no fear in getting their playsets from SOI and EMN right now.

Leaving the second Innistrad block aside for the moment, we are going to get our first glimpse of Kaladesh (KLD) Standard this weekend with the Star City Games Open in Indianapolis. All sorts of cards are going to be jockeying for position in the new format, and we'll start to see the implications of the rotation of Collected Company. Although SOI and EMN are excellent value right now, picking up cards from Battle for Zendikar (BFZ) and Oath of the Gatewatch (OGW) that could benefit from a change in the format is reasonable as well, though a more speculative strategy in nature.

If you've got your fill of SOI and EMN, look to cards from BFZ and OGW that have seen play in Standard in the past and are currently at a low price. I've been picking up cards that fit this description, including Part the Waterveil, Gideon, Ally of Zendikar, Ulamog, the Ceaseless Hunger, Nissa, Voice of Zendikar and Chandra, Flamecaller.

I don't plan to hold these cards very long, but it will depend on how they look in the new Standard format over the next month. If they are a no-show in the top decks of the SCG Open series as well as Pro Tour KLD, then I expect to book a loss on these cards. However, one winner will be enough to make it worthwhile as the prices on these cards are already depressed.

When KLD is released in a couple of weeks, there will be a liquidity crunch as players and bots drive up demand for tix looking to buy the new cards. That will be a good time to start hunting for value in Modern staples, so my advice right now is to leave Modern alone and to focus on opportunities in Standard.

That being said, October is historically a great month for players and speculators to be looking to buy cards like the Zendikar fetchlands, so be sure to save a few tix for when Modern cards go on sale.

OGW boosters have dipped to an all-time low of 2.6 tix this week and they're definitely approaching an interesting level for speculators. A sustained drop below this price during Kaladesh (KLD) prerelease events should be seen as a good opportunity to buy OGW boosters at a discount.

BFZ boosters continue to languish around 1.1 tix and these should be treated much more warily than OGW boosters. Players who want to draft the OGW-BFZ format over the winter shouldn't hesitate to grab a few boosters during KLD prerelease events, but speculators should be looking for a deep discount before wading in here.

With SOI and EMN boosters, I think it's best to take a wait-and-see approach. The introduction of Sealed and Draft leagues has changed the market for boosters substantially, increasing the float of boosters on the market and depressing the long-term price. Once KLD hits the older leagues go offline, meaning a large supply of boosters is still on the market and in players' collections with only draft queues as an outlet.

Observing how the prices of OGW and BFZ boosters have acted points to draft queues as being inadequate to support prices over the long term. If you are holding more SOI and EMN boosters than you think you need, selling in advance of the KLD prerelease weekend is correct.

With all of that in mind, there is still room for speculative purchases during KLD prerelease events. Keep an eye out for steep discounts on all Standard boosters, and be prepared to flip them back into the market for a short-term trade.

As usual, the portfolio is available at this link. I have continued to buy sets of EMN and SOI this week. There's no point in fooling around trying to figure out which Modern cards are good value in advance of Standard rotation. Just buy the currently drafted sets and ride the price changes into the winter.