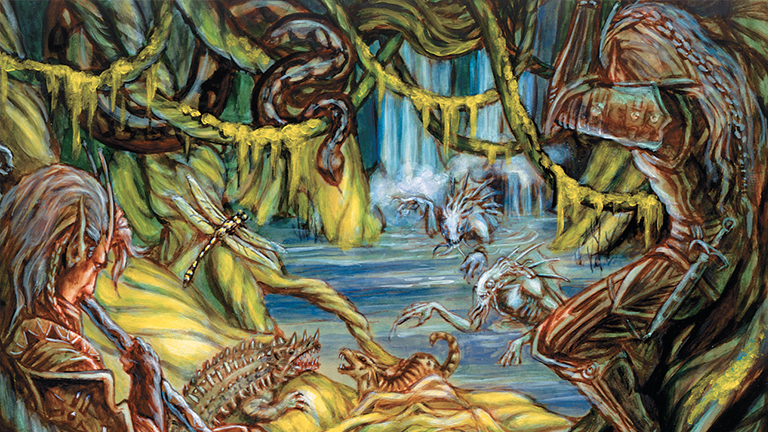 For those unfamiliar with my interests outside of MTG finance, I am extremely passionate about investing in the stock market (some may find amusement in my dubbing this “RL finance”). In fact, the vast majority of my taxable savings lie in stocks and ETF’s---not MTG like many would believe.

With this interest in Wall Street, I tend to extend my research well beyond the realm of MTG finance when determining where to invest new funds. This includes various websites, Twitter users and Podcasts. As I pick up strategies and methodologies from RL finance, I often attempt to reapply the practices to MTG finance where possible. I’d like to think this offers up a unique paradigm for MTG investing that many others wouldn’t readily have.

Recently, I have been hearing debate about stock market strategy that could apply to MTG finance as well. Allow me to explain the concept of momentum investing versus contrarian investing.

The stock market is like a massive truck with poor brakes. Any time there’s a sudden shift in direction, the vehicle overshoots where it ought to end up and momentum yanks it beyond rationality. For this reason, some strategists prefer chasing momentum trades---stocks that are ripping higher day in and day out.

Valuation isn’t important when thinking about momentum stocks---as long as more people are jumping onto the bandwagon the price can overextend beyond any reasonable valuation. Tesla Motors is a momentum stock. Just look at that wild volatility over the past year as the company fluctuates between overbought and oversold territory.

Buying Tesla stock while it is on a run higher---such as back in February---can yield massive profits. On the other hand, buying the stock while it’s falling can lead to an awful lot of pain. Observe how it tanked over 40% in just a couple short months right after the New Year. Clearly this is one truck you don’t want to jump in front of.

Other investors prefer a different strategy of stock trading. This alternate style is best summarized by using Warren Buffett’s oft-quoted wisdom: “Be fearful when others are greedy and greedy when others are fearful.” Buffett wouldn’t go near a stock like Tesla Motors. But he certainly does find interest in top-notch companies with beaten up stocks. One example could be IBM, a company Buffett owns a significant amount of.

Observe how the company really fell out of favor most of this year. Instead of panicking, Berkshire Hathaway continued to build its position in the beaten and battered name.

Since the recent bottom, the company has recovered surprisingly well. Even though the stock is temporarily out of favor, faith in management and a great pedigree throughout history may make such a disliked stock a terrific buying opportunity. Someone buying into a disliked name like IBM (or Disney, Macy’s, etc.) could be considered a contrarian investor for buying stock in strong companies that don’t have momentum in their favor.

While Magic cards cannot be directly compared with stocks, there are interesting parallels when it comes to monitoring trends. For example, Magic cards have a tendency to “overshoot” due to momentum-based speculation. Birthing Pod is an excellent example because during its pre-banning hype in Modern the card became expensive very rapidly and unsustainably.

The more I research, the more I realize many Modern cards exhibit this kind of “momentum” type behavior. Check out the historical chart of Karn Liberated as another example.

This card’s price never changed gradually---it always seemed to rise in spikes. Karn spiked in 2013, 2014 and 2016 (even after it was reprinted). Momentum has really taken this card temporarily higher, only to sell back off either quickly or gradually afterwards depending on the year.

Momentum buyers would have been buying during each spike; contrarian investors would have picked up copies after each dip (including right now, where it appears to be bottoming yet again).

Which Strategy Should You Take?

There are pros and cons to these two strategies. If there was a clear-cut superior strategy, the other wouldn’t exist---everyone would follow the same trades, and the strategy wouldn’t really be a “strategy” anymore because the opportunity would be erased. Having these two balanced approaches means one can work in some circumstances and the other can work in others.

I like the momentum trade when a major market disruption occurs. This can manifest itself as a buyout or a major metagame shift. Standard rotation can also catalyze significant movement whose momentum can be capitalized upon.

For example, when Reserved List cards were all the rage a couple months ago I enjoyed locating copies at the “old price” or even at a slightly elevated price. This happened most recently with Aluren, which recently spiked. I found a single copy at ABU Games at $16 and I was eager to grab it knowing that the card was seeing significant movement and had potential to jump again in the future. 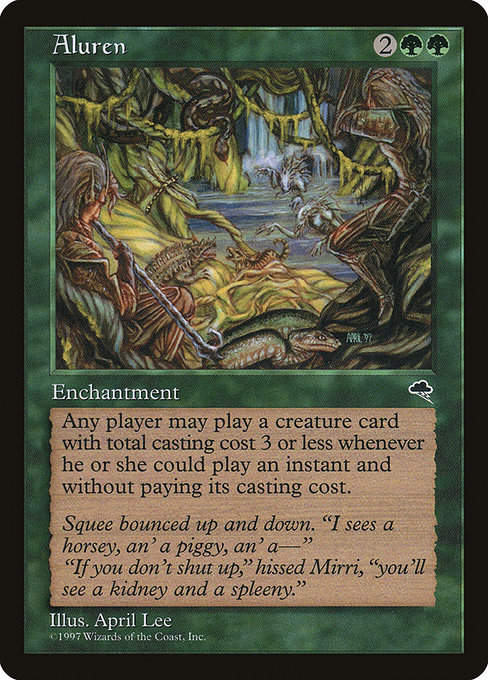 Of course I’m heavily biased by Reserved List cards. I figure if I don’t get my copies at the “old” price to flip for immediate profit, I have no qualms sitting long-term. These are cards that will never be printed again after all.

Beyond those I still like other, narrow opportunities for momentum buying. During a Pro Tour it can be favorable to acquire hot new Standard cards if you’re early enough to buy in (i.e. by Friday). When a card is unbanned in Modern or Legacy there’s also a huge buying opportunity off momentum. Ancestral Vision is a great recent example.

On the other hand, contrarian investing also offers some attractive returns when played correctly. Buying Modern staples during an “off-season” has been a robust strategy for years now.

While momentum trading is best when a card can be sold immediately after it is purchased, contrarian buying allows you a longer time horizon. You don’t have to worry about buying in too late and being unable to sell before the price tanks. Because you’re buying during a local “bottom," you are banking on an increase in price sometime in the future but not necessarily right away.

In reality, some Modern staples are excellent contrarian trades right now. Check out Flooded Strand, which is only $2 off its all-time low.

We all know fetchlands aren’t going anywhere. They’ve been Legacy staples since their printing and they are a dominant force in Modern as well. Therefore, a contrarian investor may be thinking it’s the perfect time to acquire copies. The same goes for a number of Modern staples.

Or how about stuff recently reprinted in Conspiracy 2. One day, many many moons from now, something like Serum Visions or Inquisition of Kozilek will be an excellent pick-up. It’s going to tank in price due to its reprinting, which should yield a reasonable contrarian play for profits.

With contrarian trades you have ample time to move in and out of positions. However there’s one significant downside: reprint risk.

If you’re going to buy something while it’s out of favor with the intent of selling after a long waiting period, you incur risk of having your card reprinted in a subsequent set. Snapcaster Mage can look awfully tempting now that it has pulled back in price, but the risk of reprint in Modern Masters 2017 is enough to keep me away. This is essentially why I prefer to stick to Reserved List staples.

I just can’t stand buying cards when they’re hitting all-time highs. I’d much prefer allocating resources to positions that are suffering in the short term but have great long-term prospects. It’s akin to how Warren Buffett invests.

With this in mind, I continue to target Old School staples as well as playable Reserved List cards that haven’t jumped in price crazily yet. A recent picture I Tweeted (@sigfig8) sums up the kind of stuff I’m after. 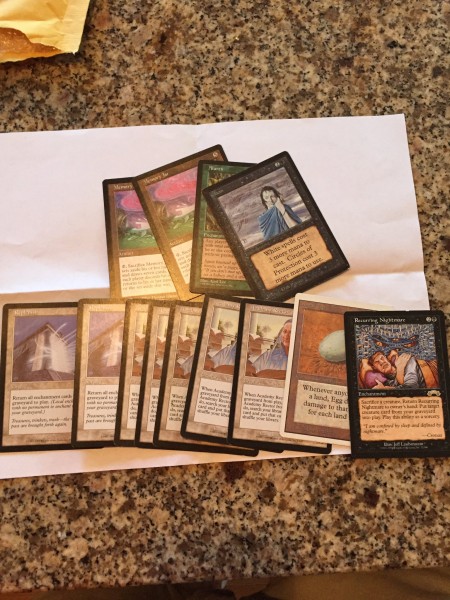 Notice any trends? With the exception of Beta Gloom and Unlimited Dingus Egg (two pickups for Old School play), each of these cards are on the Reserved List. They all offer plenty of long-term upside potential. The fact that most haven’t really spiked yet (besides Aluren) means I am picking up these cards in the hopes that one day they do become suddenly more desirable than they are today. If not, I can wait. I got time.

Just as you can find a strong company with a broken stock, I am confident we can find a Magic card with a ton of utility but an out-of-favor price. By targeting powerful cards, you can set yourself up for plenty of upside with minimal downside. Add in the requirement of targeting Reserved List cards and you avoid the turmoil of reprints. This ultimately enables you to acquire your cards and then sit and wait. That’s my kind of MTG finance!

3 thoughts on “Insider: The Contrarian vs. The Momentum Trade”