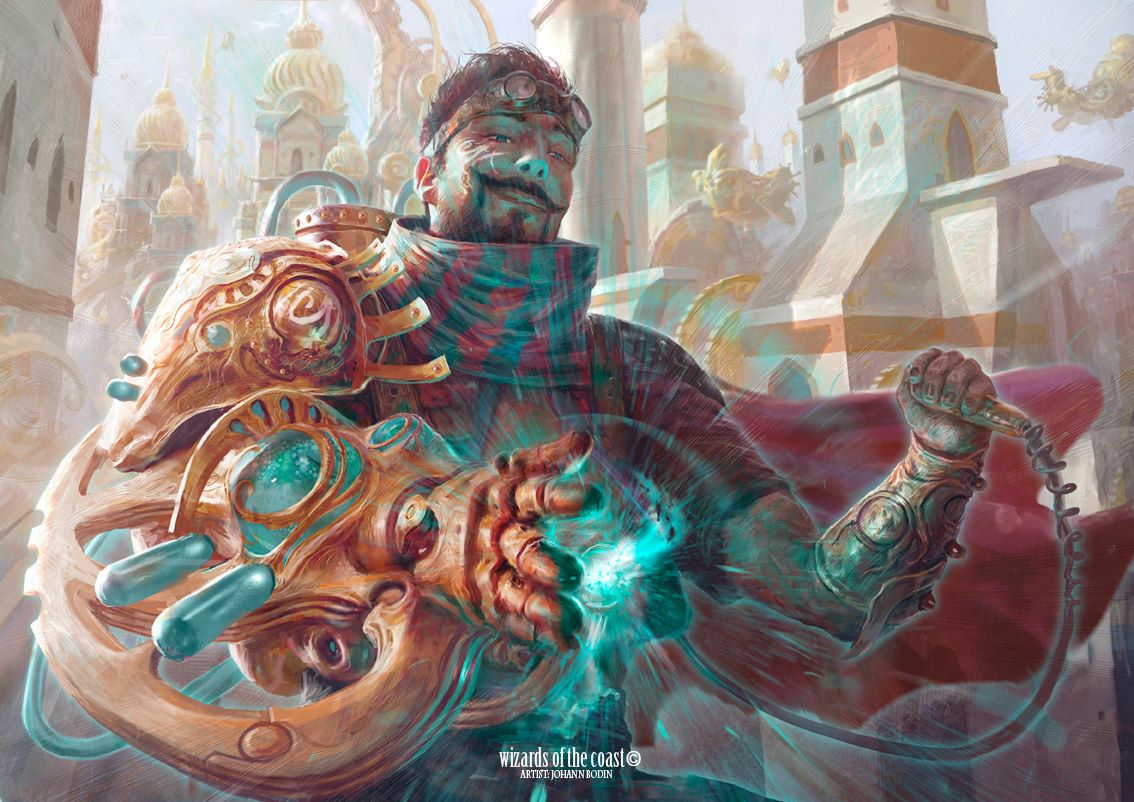 Standard. Standard, everywhere. This truly is the format in focus this month as players and speculators alike attempt to predict what the new metagame will look like with Kaladesh in and Dragons of Tarkir/Origins out. I used to enjoy this challenge, and there were certainly times in the past that following the right folks on Twitter revealed profitable ideas in broad daylight.

Those days are gone.

Wizards of the Coast introduced Masterpieces with the intent of keeping Standard prices down. So while there will certainly be a few cards here or there that pop, the ceiling on everything from Battle for Zendikar forward will be lower than before. That means the land mines—overpriced cards likely to drop—are more plentiful. Additionally, the upside is reduced versus before. Seems to me like Wizards of the Coast’s success comes at the expense of part-time Standard speculators like myself.

So what do I do at a time when Standard has taken center stage? The top eight movers over the past week were all Standard cards; seven of the eight were from Kaladesh.

Do I follow the mantra, “If you can’t beat ‘em, join ‘em,” and speculate on Standard despite headwinds? Do I buy recently poor performers such as Dark Confidant or Snapcaster Mage, knowing that reprints in Modern Masters 2017 could be right around the corner? Do I continue to get deeper and deeper into Legacy and Vintage cards, knowing these formats are stagnant and offer only slow, gradual growth?

None of these. This week I’m breaking down the barriers of MTG finance to offer you some thought-provoking alternate investment avenues. They aren’t MTG finance, but they are tangentially related and could offer some intriguing opportunities to profit.

I follow hundreds of MTG players on Twitter (@sigfig8). If I had to rank the top five topics I see discussed in my feed, I would say PokémonGO probably falls in the fourth or fifth slot behind Magic-related items. In other words, I suspect there’s a strong correlation between those who play Magic and those who enjoy PokémonGO. The game has entertained tens of millions of people worldwide. And while the player base has dropped off significantly since the game’s initial release in July, loyal fans (myself included) continue to engage with the augmented-reality game on a weekly basis.

If I were to draw a Venn diagram with MTG Finance in one circle, CCGs in another circle, and PokémonGO in the third, the overlapping circle just may look like this: 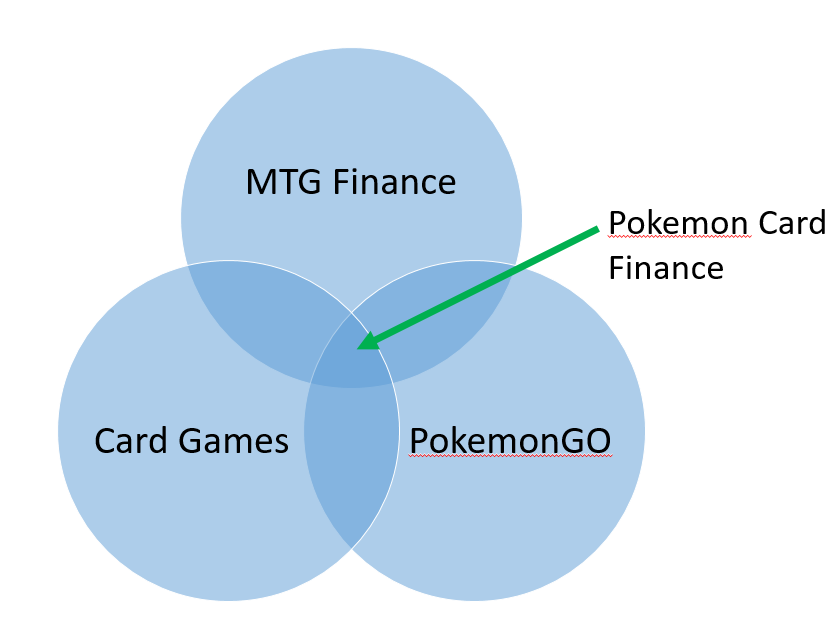 You may be asking whether or not I believe Pokémon cards can truly be better investments than MTG. I’ll be first to admit that, as a whole, I’d prefer MTG over Pokemon. But there are two trends worth identifying regardless.

First, Kaladesh has quite possibly catalyzed growth in holo energy Pokemon cards. I’ve seen a handful of players pursue these Pokemon cards specifically because of the introduction of the energy resource in Magic. Take a look at the sale volume on these:

Selling one holo energy for $2.32 is hardly interesting. But when someone gets a handful of holo energies together, they add up quickly. 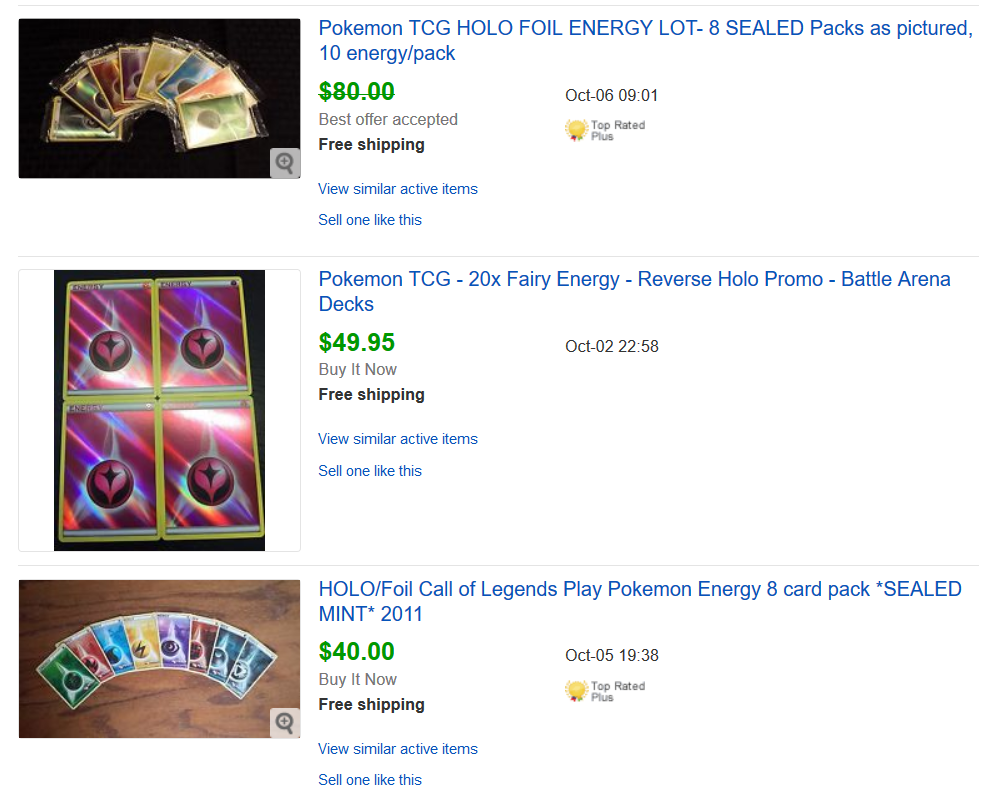 The second area I have my eye on is the iconic. Truly investible copies of Pokémon’s most classic cards have shown some price appreciation lately. Perhaps the most famous is the Base Set Charizard. While the data in the chart below is noisy, the overall trend is irrefutable: up. 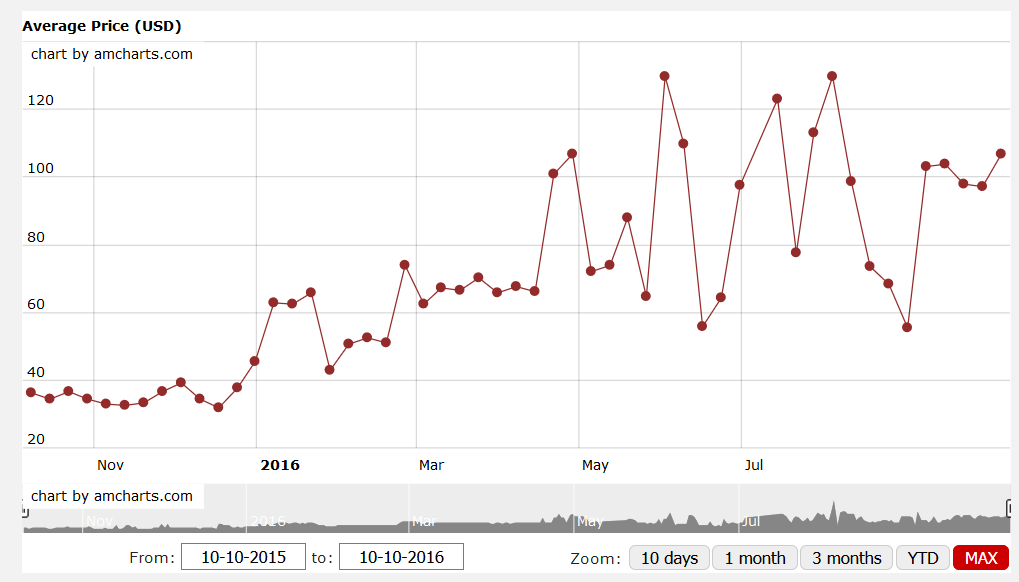 Naturally, getting into graded versions of the Base Set Pokémon cards can offer an even more secure investment given collectibility. And if PokémonGO can convert at least a handful of players into collectors of the cards, you may have yourself a worthwhile investment. Stick to the most iconic cards, and you’ll minimize risk to this investment while gaining exposure to the returning phenomenon that is Pokémon.

I’m not going to draw a Venn diagram for this one. No one is going to challenge me when I state that there’s a solid correlation between Magic players and people who enjoy video games. In Magic, many players have aged along with the game. Now in their twenties and thirties, these long-time players have incomes they can use to acquire some of the more iconic and expensive cards in the game. This is one of my hypotheses for why Power and the like will continue to appreciate over time.

As it turns out, collectible and iconic Magic cards are not all that us thirty-somethings are buying with discretionary income. We’re also nostalgic for other happy memories of yesteryear. I’d posit that classic video game investment is an up-and-coming trend that merits a closer look. Much like with MTG, I equally enjoy picking up the classic games I remember as a kid…and I can’t be the only one with this longing for nostalgia.

In this hobby, good luck landed on my side. The consoles I grew up with and had the fondest memories of were the Sega Genesis and Sega Saturn. It turns out these systems had some pretty rare and valuable games—especially the Saturn, which is generally considered a failure in the United States. So when I seek out games for their nostalgia, I simultaneously find myself investing in some rare games with appreciating value. According to GameValueNow.com, the average complete (read: collectible) Sega Saturn game has doubled since May 2016!

The Sega Genesis was much more popular in the U.S. So it’s no surprise that the price growth in Genesis games has been more gradual—there’s simply much greater supply on the market. Still, the direction has been upward over the last 16 months.

The same can be said for the Super Nintendo and the Nintendo 64, by the way. Their indexed charts both show decent price growth since May 2015.

As an individual example, consider the last game ever to be released in the United States: Magic Knights Rayearth. It’s an RPG based off an anime, which I personally think is an awesome theme. Naturally being released so late in the Saturn’s cycle, not many copies were made. Thus, you have yourself an expensive game with a rapidly growing price tag.

Having sold so poorly, Sega Saturn and its games are quite limited in supply. But that doesn’t stop an aging fanbase from acquiring the games from their childhood. Add in a rising average income for these fans, and you have an equation that looks very similar to that of Power and iconic Magic cards: gradual, steady growth. I like these price charts most because they’re predictable and offer a terrific risk-reward equation.

Let’s quickly walk through a stream of logic.

In a vacuum, the natural conclusion could be that Hasbro’s stock is a screaming buy. Of course in reality there are many other factors at play that impact the toy maker’s stock price.

There’s no way someone can follow my analysis above and conclude that Hasbro stock is a worthwhile investment. I don’t even know if there’s a direct correlation between Magic: The Gathering sales and Hasbro’s stock price. What I will say, however, is that Hasbro stock has performed fairly well over the past ten years, far outperforming the S&P 500.

If we as MTG speculators truly thought Wizards of the Coast was striving to keep Standard prices down by introducing a new rarity and increasing product releases to drive sales growth, perhaps the most logical conclusion is to put that MTG money into Hasbro’s stock itself. If Hasbro and MTG speculators are butting heads, it almost feels like buying Hasbro stock is like betting on the house.

While I wouldn’t make the investment based solely on this article, I do suggest looking more seriously at this idea. MTG won’t be around forever… but Hasbro is highly likely to outlast Magic.

I know this is an MTG investing and speculating website, but sometimes a little outside-the-box thinking is worthwhile. If nothing else, it provides alternate investment avenues you may decide to look into further.

Many people are aware of some alternate investments: artwork, coins and antiques are just a few. But I think Pokémon cards and vintage video games both merit a closer look. They correlate well with MTG investors, so if we make the argument that MTG investors have more discretionary income to spend, then it’s logical they’d spend that money on their interests outside of Magic.

Hopefully the data I presented support this hypothesis. I don’t own many Pokémon cards, but I have a friend who can attest to price appreciation on some highly graded collectibles from the game’s inception.

What I can attest to firsthand is the return on investment I’ve tracked on my growing Sega Saturn game collection. Seeing as I don’t expect there to be a “Sega Saturn reprint” anytime soon, I believe the trajectory for the next few years should remain upward. After all, these games are only getting rarer and harder to find.

Much like the iconic Power Nine in Magic, high quality, desirable video games will gradually fall into the hands of collectors. Supply will dwindle and prices will rise. I can’t wait to see what prices look like ten years from now—I suspect these “antiques” will have quite the price tags!