As always, speculators should take into account their own budgets, risk tolerance, and current portfolio before buying or selling any digital objects. Please send questions via private message or post below in the article comments.

Below are the total set prices for all redeemable sets on MTGO. All prices are current as of October 17, 2016. The TCGplayer low and TCGplayer mid prices are the sum of each set's individual card prices on TCGplayer, either the low price or the mid price respectively. Note that sets of Theros (THS) are out of stock in the store, so this set is no longer redeemable. 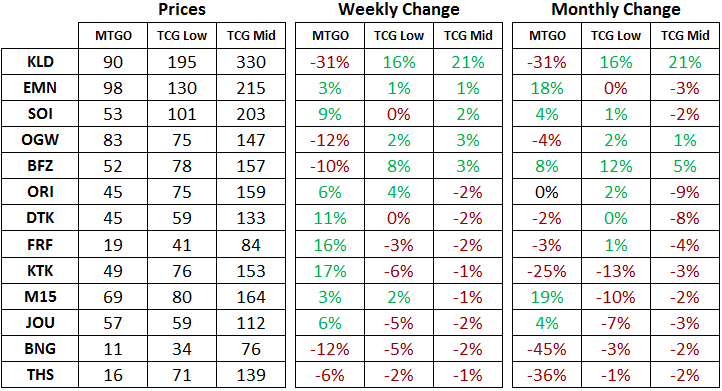 Flashback drafts are on hiatus until the end of the month. Look for triple Innistrad (ISD) drafts just in time for Halloween. 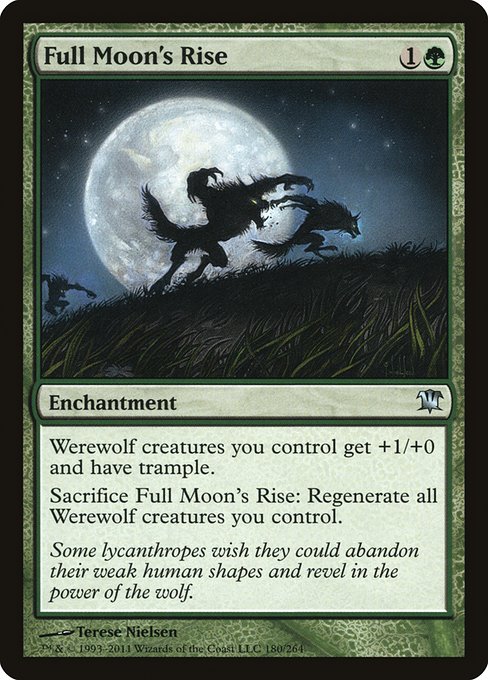 Edit: A change to the frequency of Standard rotation has been announced and it's reverting to only occurring in the Fall. This means that Battle for Zendikar block will be in Standard an extra 6 months, rotating in the Fall of 2017 instead of the Spring. There will be extra time for your specs from this block to pan out, so it lowers risk a little. Note that, Shadows Over Innistrad block is still in Standard for only 18 months as it will rotate in Fall 2017 as well.

Pro Tour Kaladesh (KLD) is in the bag and the new Standard format is starting to take shape. Here are the top performing decklists. The MTGO market is going to be digesting this new information over the coming weeks. Needless to say, speculators should be very cautious now on the new cards from KLD.

The flood of supply from drafters and Sealed players will be relentless in bringing prices down. Combine that with the shortened redemption period, and there's no reason to be establishing long-term positions in any cards from this set right now. There will be a large price drop for this set near the end of the redemption period in the spring. This will be a buying opportunity, but it will be difficult to spot and only obvious in hindsight.

From a player's perspective, if you are looking to test out the format, it's a fine time to be picking up cards from Eldritch Moon (EMN) or Shadows over Innistrad (SOI). Both of these sets still have a year to go in Standard, and the winter is typically the period of time with the highest prices. The near-term bottom on these sets has come and gone, but I anticipate higher prices down the road.

On the other hand, players should be very cautious around picking up cards from Battle for Zendikar (BFZ) and Oath of the Gatewatch (OGW). Both of these sets will be rotating in the spring, so at some point in early 2017 they will come under strong selling pressure. Any significant price spike on cards from these sets over the coming months should be considered a good time to sell cards and reduce holdings.

Lastly, I'll leave my readers with a bit of a puzzle. Foil versions of Aether Meltdown, an uncommon from KLD, are currently carrying a buy price of 10 tix at GoatBots. This is an unprecedented price for an uncommon from the current draft set. If this is a signal about the relative scarcity of foil uncommons in a short redemption window, there could be opportunities lurking in the other sets that have longer periods of redemption.

Edit: This puzzle has been solved! Apparently the distribution of KLD foil uncommons was off, resulting in a much lower quantity being 'printed'. This has been corrected for so we should start seeing more normal foil uncommon prices in the coming weeks.

Now is an excellent time to be accumulating Modern staples in your portfolio. With the Magic-playing world focused on KLD Standard and the fallout from the introduction of Treasure Chests still reverberating, many cards are on sale right now. We've even see a few cards that have already rebounded in price. It can be difficult to be a buyer in times like these, when prices have been going down for months, but as Warren Buffet likes to say, "If you wait for the robins, spring will be over."

On the horizon there is a Modern Regional Pro Tour Qualifier season in early December. Some players will be testing on MTGO for this event, which will drive interest in the format. Following that, there is a MOCS monthly event in early January that is Modern, followed by a MOCS playoff event two weeks later. There will be ample reason to be playing Modern on MTGO over the next few months. For more details on the MOCS events, check out this link.

For Dragons of Tarkir (DTK) and Magic Origins (ORI), these two just-rotated sets are on sale at the moment. It looks like the absolute bottom on set prices was last week, so players should feel confident about picking up their playsets of cards like Jace, Vryn's Prodigy and Collected Company. Once we see paper prices on these sets stabilize, redemption will provide support on digital prices, but both sets certainly look like good value at the moment, with the edge going to ORI.

A reminder that Born of the Gods (BNG), Journey Into Nyx (JOU) and Magic 2015 (M15) will all go offline for redemption in November. This means that there will be some price adjustments on cards from these sets as the price floor provided by redemption disappears. If you are holding any mythic rares from these sets, particularly cards that are not Modern-playable, be sure to sell these soon. For example, Ajani Steadfast is a 7-tix card right now, and this value is coming mostly from redemption since this card is not Modern-playable.

KLD booster prices have recovered and are sitting closer to their equilibrium price in the 3.2 to 3.3 tix range. This is a good demonstration that the short-term trade of buying boosters during prerelease events will yield small but guaranteed profits. It looks like one will be able to bank on generating 0.2 to 0.3 tix of profit per booster, if you can acquire them at 3 tix or less. Speculators will have to decide for themselves whether or not this trade is worthwhile; buying and selling 100 boosters would yield about 25 tix at this rate.

Elsewhere, EMN and SOI boosters are recovering from their lows as we get further away from the release of KLD on MTGO. This uptrend will slow down when flashback draft queues return, but for the moment, the second trip to the plane of Innistrad is the only draft format available as an alternative to triple-KLD draft. It also helps that it is very cheap to enter using product from the secondary market, with a discount of over 4 tix relative to the tix-only entry fee of 12 tix.

There was an error retrieving a chart for Arlinn Kord

Lastly, EMN boosters will become increasingly scarce as the 6-2-2-2 draft queues award a skewed prize total of five SOI boosters and seven EMN boosters. If the prizes were instead four and eight boosters respectively, then the amount of boosters entering the market would be in the same ratio that they are drafted. The fact that they are not awarded in this ratio means that EMN boosters should become relatively more scarce over time when compared to SOI.

Although I was skeptical about the long-term viability of EMN and SOI boosters as a speculative strategy, this does not rule out potentially profitable short-term dips. Like most of the prices on MTGO, these also fell in price substantially once KLD was released. Buying these boosters on the weekend of KLD prerelease events has proven to be a profitable move.

As usual, the portfolio is available at this link. This week I was focusing on the short-term plays around the results coming from Pro Tour Kaladesh. This is a highly speculative strategy, as the price swings on cards that get exposure can be very high. This strategy works best when there is some knowledge around which cards might be making an impact, especially as the effect becomes more widely recognized by speculators and the market. If everyone is buying up cards to speculate on, it will be easy to turn a loss if your timing is not perfect.

For this reason, I think it's better to go with cards that have some pedigree. In this case, I decided that I wanted to go with the Gearhulks, the flashy cycle of creatures reminiscent of the Magic 2010 titans. I did eliminate one card from the cycle, though, judging Combustible Gearhulk as being the least likely to make a Constructed impact. All the other Gearhulks have an immediate board impact, while the red one does not. This relegates the card to only having fringe applications and thus unlikely to make an impact in Standard in the near term.

With no actual knowledge of how Standard was shaping up, purchasing these four creatures allowed me to spread my risk around. The key would be take advantage of any price swings related to coverage of the top decks. With KLD only being available for a little over a week, there is not enough supply on MTGO to accommodate a spike in demand. Catching that spike and the resultant increase in price would be my challenge. 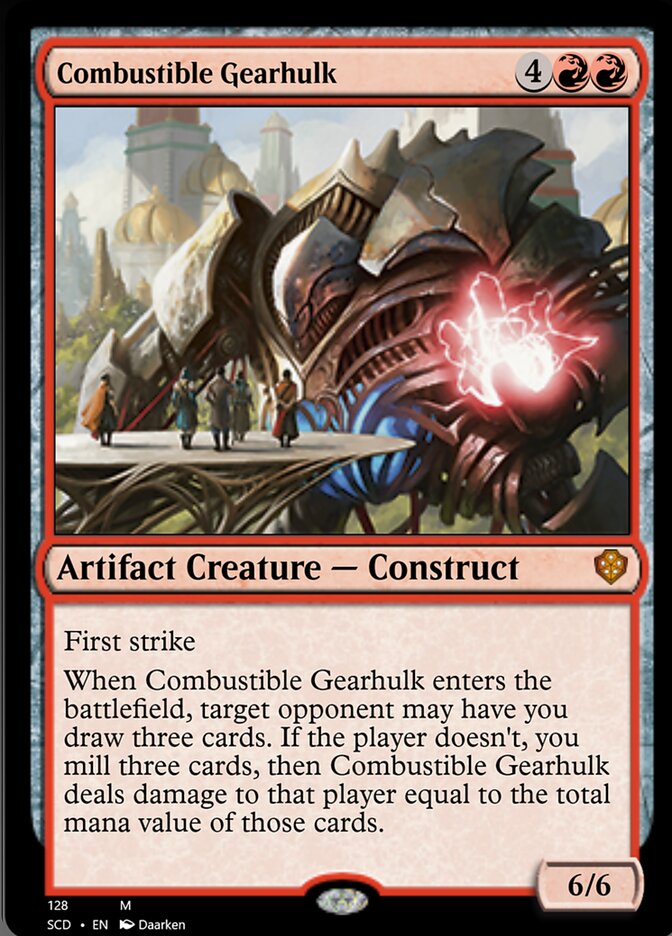 Over the weekend prices peaked in the evenings when constructed coverage was live and the North American market was online playing MTGO. There was a 5-tix difference in the buy price of Torrential Gearhulk between the morning and the evening on both Saturday and Sunday. For short-term speculative strategies, it is crucial to maximize your winning picks. Selling in the evening could be the difference between a nice short-term profit and a small loss.

It turned out that Torrential Gearhulk was the big hit of the weekend and was the card that doubled from Thursday prices into the weekend. Verdurous Gearhulk came largely as advertised, but it has fallen about 40 percent from its Thursday price, with Noxious Gearhulk suffering a similar fate. Cataclysmic Gearhulk appeared as a singleton in one of the top decks from Pro Tour Kaladesh, and its price is following suit. Buying a basket of Gearhulks proved to be a modestly profitable short-term strategy.