Well, I realize it's been a long hiatus since our last Deck of the Week, but we're back nonetheless. I spent much of the weekend tuned into coverage of Grand Prix Dallas, and if most of the on-camera archetypes were boring mainstays and known quantities, the deck that took it down most certainly was not. As much as I was rooting for Ryoichi Tamada to take his innovative Pyromancer Thing deck to another Top 8 berth, the weekend undoubtedly belonged to Skred Red. 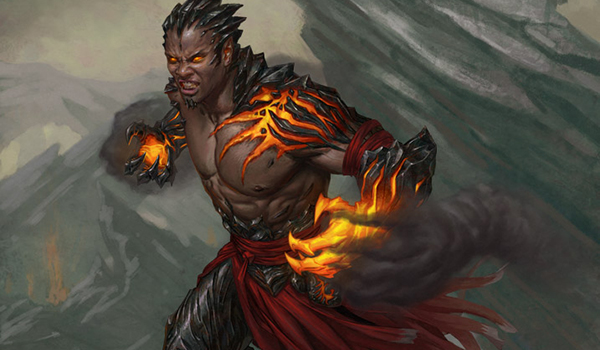 Long-time Modern aficionados won't be wholly unfamiliar with the likes of Skred Red, as it has existed in one form or another for a while. But while you might have run into it at your local FNM or piloted it to a plucky finish in an MTGO league, it hasn't exactly put up impressive numbers on the competitive scene. As near as I can tell, until this week its best showing was a 27th place finish at the Star City Games Open in Louisville. Yesterday it cracked the Top 8 of a major event for the first time, before going on to win the whole thing.

4 Koth of the Hammer
1 Chandra, Torch of Defiance

The most obvious draw to playing this deck is unsurprisingly its namesake, Skred. On the weekend Kevin Mackie reporting using the one-mana instant to take down a Platinum Emperion and a 7/8 Kalitas, which is starting to sound shockingly similar to a Swords to Plowshares with no downside. The true cost, of course, is hidden in the hoops you must jump through to put it in your deck in the first place. As the only Snow duals available are woefully underpowered for the Modern format, this effectively translates to a mono-colored deck.

That said, the all-Snow-Covered Mountain manabase brings other benefits with it. I don't think that Scrying Sheets is the kind of powerhouse card draw engine you'd generally write home about, but a resolved Koth of the Hammer sounds quite formidable. This is truly the only deck I could fathom sleeving up Koth, as even the "mono-red" burn deck of the format nearly always splashes for Lightning Helix, Atarka's Command, or (back in the day) Bump in the Night. 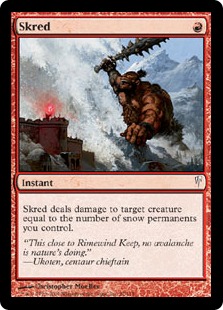 Skred Red also puts in the work to mitigate that steep four-mana casting cost with the full complement of Mind Stones.

If you ever ultimate him, good luck to the opponent—they can expect an output of 4-5 damage per turn, easily. Koth and Stormbreath Dragon let this deck laugh off planeswalkers like Liliana of the Veil, and turn the corner nice and quick when it's time to kill the opponent. This much haste might make combat math tougher too, although my guess is that Skred Red finds itself on the back foot more often than not.

The other payoff for running mono-red is access to a Blood Moon that will never, ever, punish you. In addition to Blood Moon, the deck has access to a variety of disruptive tools, primary among them Relic of Progenitus and a sweeper in Anger of the Gods. That gives Mackie some nice maindeck tools against graveyard-based combo and creature decks alike. All in all, it looks like decks that aim to attack life totals directly will have a tough time fighting through all of the removal. And Burn has to contend with a full four-of Dragon's Claw out of the board—ouch. That makes this deck well positioned against a wide swath of the field right now, dominated as it is by linear creature strategies.

What's in a Threat?

Scouring old tournament results for Skred Red finishes reveals a wide diversity of threats across different lists, which makes sense considering how little attention it has received over the years. In other lists we see appearances by Boros Reckoner (often alongside Blasphemous Act), Demigod of Revenge, Goblin Dark-Dwellers, and even Trading Post. Mackie has a relatively streamlined version, the product, as he explained in his deck tech on the mothership, of several weeks of concerted tuning. 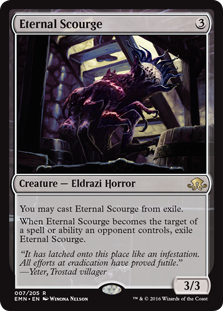 The two headliners here are Stormbreath Dragon and Pia and Kiran Nalaar, joined by two copies, of all things, of Eternal Scourge.

The Nalaar family needs no introduction, in Modern or elsewhere. Here they serve a similar role as in Grixis Control strategies, stabilizing the board against all manner of threats, flying or otherwise, while playing the value game in matchups where that's relevant. That second purpose is largely what Eternal Scourge is up to in this deck, threatening to recur indefinitely off of a Relic of Progenitus and grind down the kill-spell decks.

Stormbreath Dragon seems like an odd inclusion, but if you ignore its hefty mana cost, the stats line up well in format saturated with Path to Exile, Lightning Bolt, and Abrupt Decay. Between the Mind Stones, Koths, and the Chandra, Torch of Defiance, it's not unthinkable to get to seven mana for a monstrous activation either.

Archetypally, Skred Red is kind of like a mono-red Jund. With 4 Bolt, 4 Skred, Anger of the Gods, and threats that can stabilize, you're on the kill-everything plan in some matchups and the pressure-your-life-total plan in others. I imagine this is somewhat determined by the particular opener you fan out in any given game, which is likely also one of the deck's major weaknesses.

With no card filtering, a hand of Blood Moons and Stormbreath Dragons against an aggressive deck might fall flat, whereas a pile of Skreds does little against a control deck. Tarmogoyf and Liliana of the Veil, on the other hand, are flexible enough to be useful, if not perfect, in most situations.

Like with any midrange deck, post-board configurations of Skred Red will be much better suited to address the matchup in question. That said, I don't envy the Modern player who has to sideboard with access to just one color (unless it's white).

The one glaring weakness appears to be spell-based combo and blue counterspells—and Mackie was explicit in stating how a metagame full of such decks is bad news for Skred Red. But if you expect to face lots of matchups where 8 Bolt effects shine, the deck might be a reasonable under-the-radar choice.

5 thoughts on “Deck of the Week: Skred Red”