My visibility on the Internet hasn't been what it usually is over the past couple of week. I mean, my articles have still been coming out every Thursday, and I've still been "guesting" on Brainstorm Brewery every week, but I've mostly been absent from Twitter and Cartel Aristocrats.

The combination of grad school, work, and collection buying has gotten a bit hectic, so I've had a lot of catching up to do, with very little time on Wednesdays for #breakingbulk. This situation has been breaking my heart a bit, so we'll go back to more of a bulky topic this week. This topic was submitted a while ago as a question for Cartel Aristocrats that I never got the chance to answer. I can't find the exact tweet, but we're gonna talk about the difference between this:

These are the same card. Neither of them are foil. One of them is worth a fraction of a dollar, and the other easily crests $3 at market price.

For several years, we've heard the mantra that old-bordered cards are preferred to the modern border, and that has historically come with a price increase based in part on an overall lower supply.

The first example that comes to mind is the difference between Onslaught and Khans of Tarkir fetchlands: While Polluted Delta no longer reigns on its $100 throne, the 2002 version still holds up to a multiplier of three on the more recent printing. Those who aren't inundated with bulk might be confused that the same doesn't always hold true with pickable bulk commons and uncommons that have been reprinted in a different style.

Let's start by looking at this from the most basic level.

If you go on TCGplayer, you'll see literally hundreds of "axe" and "sword" variants of Alliances printings for Arcane Denial. When you compare that to the fact that there are only 50 total listings (separate sellers, not counting the quantity possessed by each seller) for the Commander 2013 and Commander 2016 printing combined, that speaks to the volume of bulk available on the market.

There would have to be an exponential increase in demand for the older printing for it to be worth a significant figure next to the reprints, but stores just have so much Alliances bulk that the demand that does exist doesn't matter in the slightest. Digging further into TCGplayer's listings reveals that there are still almost eighty stores with four or more copies listed, and some of those stores have up to 32 of just one of the artwork variants. When it comes to bulk collections, there's just a ton of leftovers from the "Force of Will lottery" that nobody really wants to touch.

The next point is more abstract and less measurable, but still evidenced by the hard numbers that we can see. As the vocal minority on social media, Twitter, Reddit, and competitive Magic events, we often forget that a huge portion of the player base started getting into the game long after the old border died out. While we bling out our decks with old-border judge foils and revel in Old School MTG, there's a massive silent majority that enjoy that same symmetry the rest of us love, but their collections are all modern border.

To put it simply, the old border is ugly to these people, and the abstract painted art style just doesn't appeal. We'll get into this point a little bit further down with some other cards that explain it more clearly, but this is a perspective shift more than anything – newer players like the new border.

Here's another example that helps illustrate the point more. Krosan Verge is a well-known Commander card, and sees play in thousands of G/W/X decks. The Judgment printing is $1 retail and around $.50 buylist; a solid pick and an excellent (albeit kinda obvious) #breakingbulk. However, the two supplemental product printings are more than double the original! In this case, we can't really blame the artwork. They reused the same piece of art for all three printings, so that factor remains the same. The oracle text has remained steadfast over the past decade, with the only change being the "one colorless mana" updated to a symbol that would itself later become obsolete for star mana. So what's the difference here?

Other than incredibly low supply (again, by looking on TCGplayer we can see that the now three supplemental products add up to a fraction of the available supply of Judgment), the big difference in these printings is literally the color of the card. I mean, they're all "colorless" in game terms, but I'm talking about the visual colors that we see: the frame for old lands that tapped for colorless mana used to be that brown-orange chromatic that was later shifted to gold.

Since the reprintings, Wizards felt that it would be more aesthetically pleasing for this pseudo-fetchland to be updated to reflect its ONS and ZEN counterparts. Now with a Commander 2016 printing bearing down and the amount of value already packed into these decks, we're finally seeing this frame style converge with the Judgment printing.

Thankfully, you'll still probably be able to pick and buylist Planechase and Archenemy copies because of the astronomically low supply, and stores will still want to have them in stock to sell at $2.50 or $3 to the completionists out there. TCGplayer literally has only three Archenemy copies listed on the site. No filters, all conditions – just three.

So how does this affect you today? I mean, it helps if you're picking bulk that includes supplementary products to know that the reprinted cards with updated frames and artwork are usually worth significantly more, sure. But what about those of you who, uh, aren't doing that? Well, there's a few cards in particular that are being released in that very same Commander 2016 that have some new characteristics that will make them stand out. 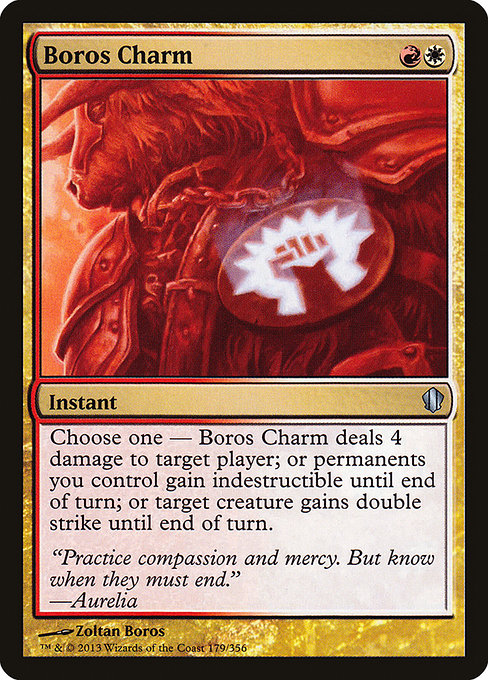 Right now, Boros Charm is a $2 card. There will be a lot of people who expect this reprint to crush it to a $1 card, but I disagree.

This printing is unique in that the formatting is so much cleaner than previous other releases, and those bullet points will make this printing the desired one by a non-zero number of players. While foilers are gonna foil, this is by far the cleanest printing of the Charm cycle, and I would be happy to continue trading for these at $1 all day.

Note that this isn't something that I expect to make Merciless Eviction a non-bulk rare; it's still totally a bulk rare until the end of time. However, this is still definitely the "value" charm to look out for and to not underestimate if you end up picking Commander 2016 bulk.

Got any other similar examples of a reprinted card showing more financial stamina than its original older border? Let's have a chat in the comments or on Twitter. Have a great weekend!